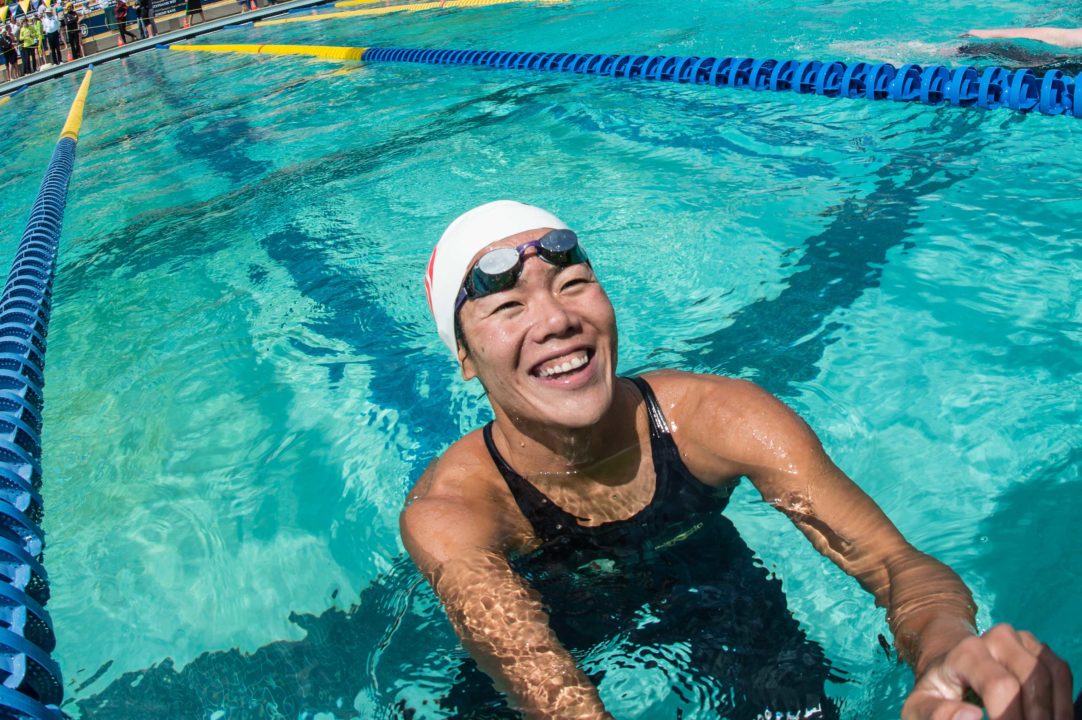 Many famous international swimmers competed on days 2 and 3 of FINA Masters Worlds. Noriko Inada (above) was a Japanese Olympian, turned a USMS swimmer posted the fastest times in the 200 back and 50 fly. Current photo via Mike Lewis/Ola Vista Photography

Days 2 and 3 of the FINA World Masters Swimming Championships saw the establishment of new world records and numerous former Olympians competing in a variety of events and age groups.

There were two world records in the 200 meter backstrokes on Tuesday morning. In the men’s events, Italy’s Luca Vigneri set a world and championship record in the 50-54 age bracket in 2:16.87. Another WR-CR followed for Tim Shead of South Africa and the 65-69 bracket as he touched in 2:39.69. The two fastest women were 35-39 year old Noriko Inada (USA) swum in 2:19.98, a new championship record. Noriko represented Japan during her olympic career, making the team three times. Great Britain’s Sophie Casson reappeared to claim the 30-34 year old title in 2:20.37. Casson will look to add to her masters career which already includes a 1500 free world record set in June.

The 100 free did not disappoint either as 2 new world records were set, 1 man and 1 woman. The first came in the men’s 45-49 year old age group from Hungary’s own Valter Kalaus in 53.66. Kalaus was an olympian in 1988, representing team Hungary. The women’s record was set in the 65-69 category as Laura Val (USA) dashed to a 1:05.00, winning the race by over 4 seconds. Val already owns many masters world records and will be heard from again this week.

No world records were broken in the first event of the session, the 400 IM. One standout swim in this event was Patrick Moreau of France as he won the 65-69 age group in 5:46.70, over 20 seconds ahead of second place. Moreau picked up his second medal and CR with that swim.

The final event of the day was the 50 fly in which 2 more men broke world records. The first was Serkan Atasay of Turkey who swam a 25.48 in the 45-49 age group. Atasay was a three time Olympian for Ukraine and now represents Turkey. Russia’s Alexey Markovskiy set the other in the 60-64 age group in 27.91.

More to come bi-daily on masters recaps and world records.

Tim Shead is from South Africa not Russia

Tim Shead is from South Africa…fyi

Want to point out that 66 year old Olympian Rick Colella swam a 5:13.36 in the 400m IM in Minneapolis a couple of weeks ago, over 33 seconds faster than the winning time in Budapest, beating Patrick Moreau by nearly 50 meters. At Masters Nationals his program also included the 200 and 400 free, 100 and 200 fly, and the 100 breast. The only world record he missed (narrowly) was in the 200 fly, which he swam about an hour after smashing the the 400 free WR (4:37.7), a truly ridiculous double. Colella regularly tackles a slew of the toughest events over a single weekend, crushing the records in all of them. There’s no one even close. His achievements are… Read more »

FELICITACIONES & CONGRATULATIONS to Oscar Carril Pereiro, University of Bridgeport graduate and 4-time NCAA Division II Men’s 100-yd Backstroke Champion, on his MASTERS WORLD CHAMPIONSHIP in the Men’s 25-29 50-mtr Freestyle in a time of 23.24, the overall fastest time swum at the Championships!!!