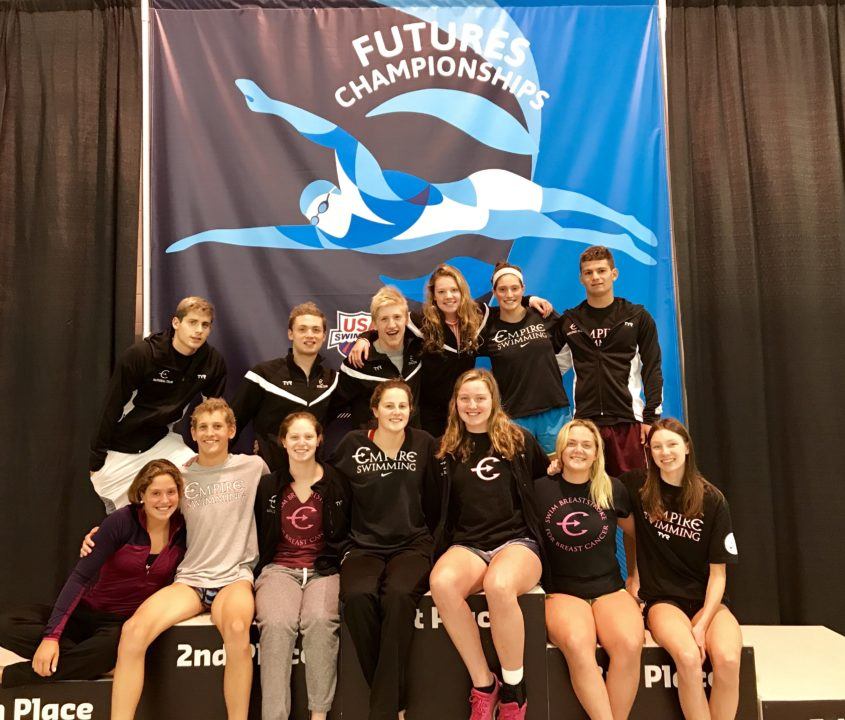 Empire Swimming's 13 member team (above) based out of Westchester County, NY won both the women's and combined team titles at 2017 Futures in Geneva, OH. Current photo via Empire Swimming

The 2017 USA Swimming Futures Championships came to an end on Sunday, with Empire Swimming taking the women’s team and combined team titles in Geneva, OH. Empire Swimming is based in Westchester county in New York and is coached by Ilan Noach. The women’s team, who held a convincing lead most of the meet, set pool records in each of the relay events. The men’s team rounded out the top five in the standings and secured a combined team win for Empire.

Meghan Joram competed in the distance session, claiming her second title of the meet by posting a time of 16:57.74, 28.81 seconds faster than her 5th place seed time, and 23 seconds faster than the second place finisher. Joram will resume her career as a Pittsburgh Panther in the upcoming season.

In the last women’s individual race of the meet, the 200 IM, two swimmers tied in a competitive final where no swimmer was slower than 2:22. Giovanna Cappabianca of Hudson Explorer Aquatic Team touched at the same time as Schenectady’s Margaret Wyngowski in 2:19.90. It was Wyngowski’s 3rd title of the meet, as she won the 200 breast and 400 IM earlier in the week. She also finished second in the 100 breast.

Empire Swimming women claimed their 3rd relay title of the meet as the team of Maureen O’Sullivan, Josephine Panitz, Kate Amar, and Madison Hartigan touched in 4:19.87, a new pool record. Hartigan pulled away from Schenectady in the last leg posting a split of 58.30 0n the anchor leg.

I was there, incredible to watch.