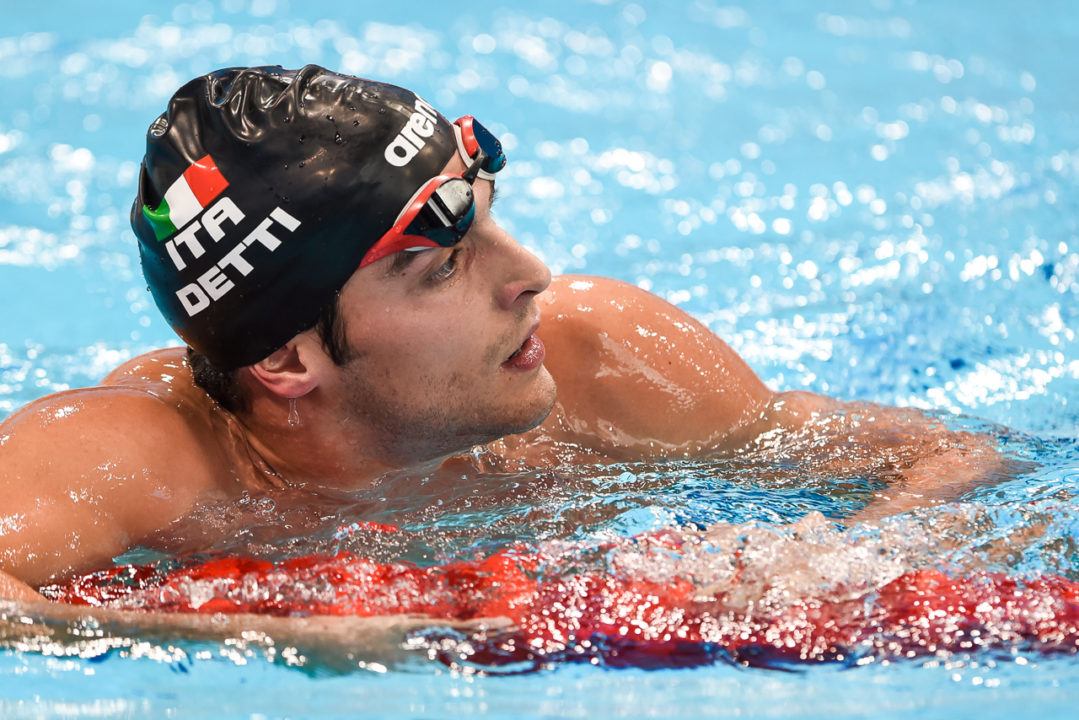 Detti has been undergoing treatment and only kicking for 3 weeks, the federation has revealed. Archive photo via Peter Sukenik/www.petersukenik.com

After pulling out of the last few stops of the FINA World Cup series, Italian swimmer Gabriele Detti has pulled out of the upcoming Italian Short Course National Championships. According to Italian National Team physician Lorenzo Marugo, Detti is battling overtraining syndrome that has caused inflamation in the front part of his shoulder.

“He will miss some workouts, but we think it can be resolved quickly,” Marugo said.

The Italian Federation confirmed the rumors that Detti will not participate in the Italian Championships on December 1st and 2nd in Riccione. Though the official statement from the federation says that “there is no official statement,” they say that they don’t believe that he will compete at the European Championships two weeks later in Copenhagen.

His coach Stefano Morini says that the problem flared up 3 weeks ago, and since then he has been under medical care and has only undergone leg training and therapy on his shoulder. Detti’s new target are the 2018 European Long Course Championships in Glasgow, Scotland from August 3rd-12th.

Detti was a double Olympic medalist in Rio in the 400 and 1500 freestyles, and last summer in Budapest upgraded to gold in the 800 free, which beginning in Tokyo in 2020 will be an Olympic event. Detti used to train with the world’s best distance swimmer, Gregorio Paltrinieri, until recently, but Paltrinieri left about 2 months ago to train with Mack Horton in Australia for 6 months.

His teammates say he is training hard with no sign of shoulder pain but has obtained (again!) another tue to justify his usual “miraculous therapy”.

Detti has a couple of adjustments he should make in the front end of his stroke, which likely are the cause of inflammation. He’s initially too shallow when he extends forward and initiates the catch. That puts a lot of pressure on the deltoids in the same way that a dropped elbow does. Seems like the Italians develop amazing aerobic workhorses with stroke flaws (Paltrinieri’s lateral sway and crossover kicks, for example.) As fast as they are and as hard as they work, there are blatant errors in mechanics and as yet unrealized potential.

Easy to say change this or that. No guarantee they will go faster!

If he was training USRPT, he would have been just fine.

If he only ran the 110m hurdles, his shoulder would be fine.

You could say his shoulder has dettiriorated the last few weeks.