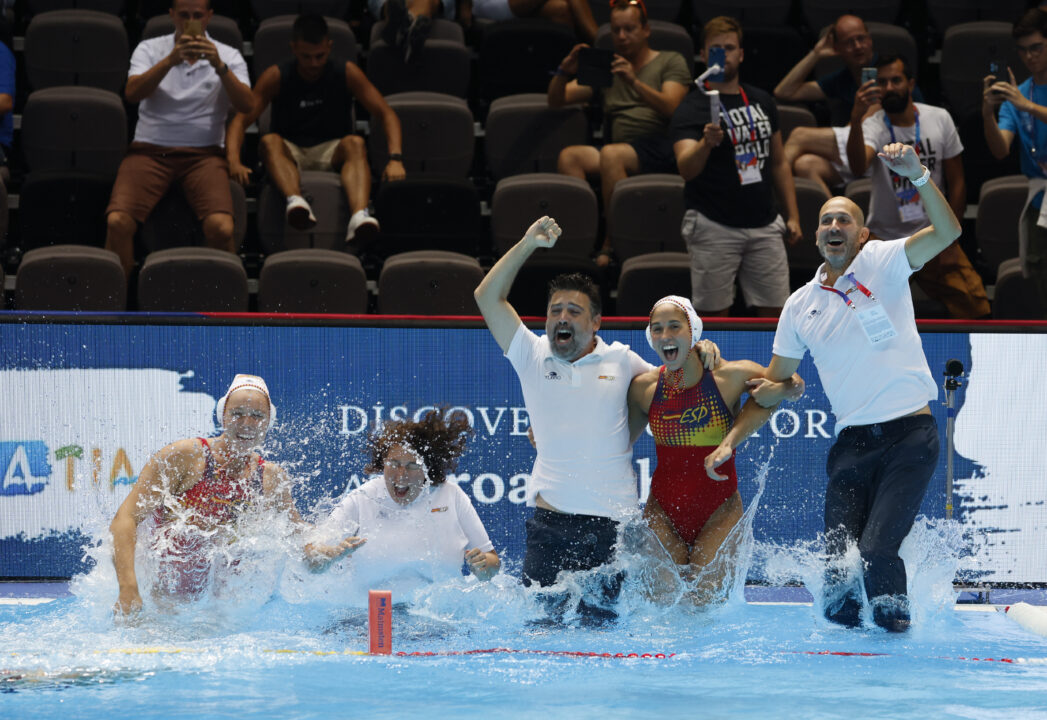 The Spaniards scored the last three goals of the game after Greece battled back from three goals down to tie the game at 6-6. Current photo via LEN

Spain became the first team since 2010 to retain their European Championships title after a fascinating final where they managed to down Greece, despite their rivals spirited effort to come back from three goals down to 6-6, but the Spaniards netted the last three goals of the game. Italy took the upper hand in an action-packed match against the Netherlands – to get their first medal since 2016.

Spain retained its title in a low-scoring but thrilling final to become the first team since 2010 (when Russia completed their treble) to retain their title. They kicked off the game against Greece with an astonishing first period, three action goals, a saved penalty, and a 3-0 lead. However, the Greeks arrived to the match in the second, and by halftime they pulled two back for 4-3. Then in the third three penalties were called in 1:36 minutes, but only one was netted, by Elena Ruiz, to double Spain’s lead before the last break. Still, the Greeks fought on and in the fourth they finally equalised at 6-6 with 4:04 on the clock. However, the Spanish reply came immediately, plus two more in the finish while their rivals were unable to add more. The Spanish could start their celebrations – Greece had to settle for a fourth silver after 2010, 2012 and 2018.

The bronze went to the Italians – they won a fantastic contest against the Netherlands, the re-match of the World Championships’ bronze medal clash. It was a 29-goal classic with sheer excitements, water polo at its best – with nine goals in the first period, an 8-5 lead for Italy in the second, only to see the Dutch coming back to 8-8 till the break. And thanks to a 7-2 rush, they jumped from 5-8 to a 12-10 lead, but when they seemed to sit comfortably in the driving seat, the Italians found some extra power to equalise for 13-13. And with 1:32 to go, they hit the game-winner, then added two more in the remaining time amidst adventurous circumstances, to win their first medal since 2016, when they had a
bronze at the Europeans and a silver at the Rio Olympics.

As a matter of interest, at the World Championships these three nations’ male teams stood on the podium in Budapest (Spain won, ahead of Italy, Greece was third) – now the women occupied it at the Europeans.

Besides the LEN top officers, President Antonio Silva, First Vice-President Josip Varvodic, General Secretary Andida Bouma and Vice-President Kyirakos Giannopoulos, the FINA President Husain al-Musallam were also present at the victory ceremony, and he handed over the winners’ trophy to the Spaniards who lifted it and seemed to be on their way to the seventh heaven.

Not long after the usual intro music was played – AC/DC’s Thunderstruck – and the usual protocol was observed, Spain produced the perfect storm in the opening eight minutes. Elena Ruiz’s pinpoint shot was a fine opener in the 27th second, Nona Perez added another action goal 1:50 seconds later, then Martina Terre stopped Eleftheria Plevritou’s penalty. She went on saving a shot in a man-down by the other Plevritou sibling Vasiliki, and still in the first Anni Espar scored a third action goal – Spain led 3-0, without playing a single man-up in the first period.

But after each storm there is sunshine – and soon the Greeks’ sun came up too. Ionna Chydirioti could finally put away a woman-up to score her team’s first after 9:24 minutes and that got them going. Though Paula Leiton’s superpower brought the 4th for the Spaniards, the Greeks could shut them out for the remaining 5:12 minutes – including killing three woman-downs – while adding two more. Margarita Plevritou netted a 6 on 5, then Christina Siouti finished off a counter for 4-3.

The third produced an extraordinary battle with dramatic misses and fantastic defensive efforts. Terre stopped a second penalty, this time taken by Vasiliki Plevritou – but Ioanna Stamatopoulou also saved Anni Espar’s shot from the 5m line. In this whirlwind of craziness, a third penalty was called in 1:36 minutes, and Elena Ruiz converted this one for 5-3. It turned out to be the lonely goal in this period, so Spain looked to be well set to retain their title.

However, there were still eight minutes to play – and there were still plenty of drama to watch. Eleni Xenaki pulled one back right away from a nicely play 6 on 5 but Maica Garcia scored a fantastic goal from the centre immediately. The Greeks missed a man-up but Eleftheria Plevritou scored from action for 6-5 with 5:04 to go and exactly one minute later it was even – Chrydioti was lucky to collect a rebound after a saved shot in an extra and she put it to the empty net.

But again, the Spanish reply was immediate, this time from a 6 on 5, by Beatriz Ortiz. Greece had an extra, but it started to fall apart and soon a turnover foul was called – and then they desperately tried to create more danger, they didn’t get any closer. And there came Garcia again, doubled the Spanish lead with another fantastic centre-action for 8-6 – with 1:32 on the clock, it was a game-winner. The Greeks couldn’t do much and Anni Espar managed to add one more, the goal ‘made’ the VAR-validation too – it was the coronation moment for Spain, for the third time since 2014.

The first period was a load-and-shoot contest, the defences didn’t find the tools to stop the attackers – since both sides were supported by loud and numerous supporters, the eight minutes were pure entertainment for the outsiders. Brilliant goals were scored at both ends – the first seven came within 3:50 minutes, followed by a brief pause (in scoring), before the Dutch equalised again with Kitty Joustra’s great centre-shot – but Sofia Giustini immediately replied with a fine shot from the perimeter for 4-5.

Roberta Bianconi doubled Italy’s lead with another action goal, then Simona van der Kraats was also on target, but Bianconi hit the back of the net from a woman-up for 5-7. The Dutch pushed but lacked the precision at this time – once Sabrine van der Sloot saved her team by catching the ball on the line after Chiara Tabani lobbed it over the goalie, but Domitilia Picozzi’s finish couldn’t be stopped so Italy went 5-8 up, with 2:30 to go till the middle break. However, the Dutch suddenly regrouped themselves and made up for everything they missed earlier – in the last two minutes they netted two extras and van der Sloot blasted one from 8m in the dying seconds for 8-8.

And the Dutch carried on their momentum for the third period, despite Giustini’s action goal opened this quarter – soon van der Kraats and Sleeking hit two in 41 seconds and the Dutch led again. A block denied Bianconi in a 6 on 5, but later Giulia Vicava sent the ball home from action for 10-10. Sleeking put one more woman-up away and even though Caterina Bianchelli stopped Sleeking’s next shot, the rebound fell in the hand of Maartje Keuning who pushed it on from close for 12-10. As Italy missed their last extra in this period, the Dutch were the happier team – after 5-8 they produced a 7-2 run.

Though it only looked devastating – the Italians never gave in and after some great defending in the first woman-down in the fourth, they halved the distance by Bianconi’s sharp shot. What’s more, they really got going, within 1:24 seconds they had the lead, Giustini finished a two-on-one, then Bianconi hit her fourth from action for 12-13. Evangelos Doudesis called a time-out and that helped, Joustra scored a fabulous one from the centre for 13-13 and there was still 4:07 minutes to play.

The Dutch had then a 6 on 5, missed it badly. Italy had a 5 on 4 – the block denied them. Van der Sloot hit the post while Picozzi wasn’t marked properly, and she found the back of the net with a fine bouncer with 1:34 to go. The Dutch got a woman-up – and Italy’s head coach Carlo Silipo a red card for heavily criticising the call –, but a bad pass ruined it, and Italy had the ball 50 seconds to go. The Dutch head coach pushed the time-out button to force a penalty, hoping that the goalie may stop it. And Aarts could make a save, but only because van der Kraats almost jumped onto the shooter while it let the ball fly – the refs stopped the play, sent her out with substitution and the Italians could retake the shot. Now
undisturbed, Bianconi buried, practically deciding the game with 58 seconds from time. The Dutch tried everything, but their shot was blocked, then even their goalie tried to mark an Italian, it didn’t work as Giustini could send the ball to the empty net for 13-16.

The Italians celebrated wildly – after going through several stages of disappointments in the past years
(the biggest hit was missing the Tokyo Olympics), they could finally clinch a medal, the first since their
silver in Rio 2016.

The Israelis managed to withstand the pressure in the first period, holding the Hungarians on three goals – though it burnt much of their (remaining) energy, so they struggled in front and even missed the best chances, a penalty and a 6 on 4. Then a counter – rather re-counter as the player lagged behind could turn back – broke the ice, so the partial result after eight minutes looked fine from their perspective, 3-1. The Magyars switched gears in the second, scored from their first three possessions, prompting an emergency time-out from the other bench. That put a brake on the Hungarians’ rush as the Israelis managed to tighten their defence once more – what’s more, deep into this quarter they managed to score twice. However, the Hungarians netted two more in 37 seconds before the middle break for 8-3.

Then the gap started further widening in the third, the Magyars staged a 6-1 rush, while also trying to set up Greta Gurisatti a bit more than usual to secure the top scorers’ award for her. She had a two-goal advantage before the last day (ahead of the Netherlands’ Simona van der Kraats) and by adding five here, she was well set to return to the ceremony at the end, though probably would have been happier if she had been there together with her team-mates.

France finished its campaign on a high note, downed the host side with ease. The Croats seemed to get worn out a bit by the end of the tournament – their struggled in offence, missed penalties, a couple of clear chances while the French won comfortably. They jumped to a 6-1 lead early in the second period, and even though after that came a goalless period of 12 minutes, when neither side could score, that did not matter much for the French. The quality of defending was decisive – the number of saves first of all, it was 14-6, a decisive difference, indeed.