In the last WISCA poll prior to both the Division 2 and Division 1 state championships both Middleton and Madison... Current photo via WISCA

In the last WISCA poll prior to both the Division 2 and Division 1 state championships both Middleton and Madison Edgewood remain in the top spots in their respective divisions.

This past weekend was Sectionals for Wisconsin girls high school swimming. State qualifiers were announced following the conclusion of all the sectional meets.

Results have stayed somewhat static since the October 28th rankings. The top three schools haven’t moved at all in the rankings. Middleton is still first, Waukesha South-Mukwonago is second, and Arrowhead is third.

Brookfield East was the only team within the top 10 improve their ranking since the following week. They moved up from eighth to fourth and now sit comfortably ahead of fifth place Cedarburg with 391 points.

Three teams dropped in their rankings this week. Sun Prairie moved from fourth to sixth, Madison West from sixth to seventh, and Stevens Point from seventh to eighth.

Despite this weeks rankings, Cedarburg is projected to defeat Middleton at the Division 1 championships next week. To read more about that click here. 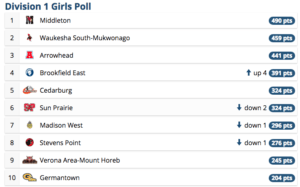 Much like division 1, the results of this weeks rankings haven’t changed much since the latest rankings released on October 28th.

Madison Edgewood is still ranked first, McFarland is still in second, Whitnall in third, and Greendale in fourth. Merrill is the only other team that retained their ranking, sitting in eighth overall.

Monroe/New Glarus moved from 10th to ninth this week. Tomahawk is the only other team to improve their ranking this week. They moved from seventh to fifth. Their improvement bumped Baraboo from fifth to sixth and Whitefish Bay from sixth to seventh.

Madison Edgewood is expected to win the upcoming state championships following results from this past weekend’s sectional meets. To read more about it click here. 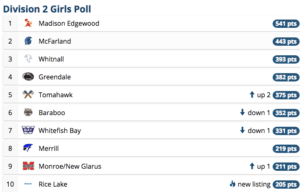