Wilson and Manz Slip Under 200 IM Record in Prelims 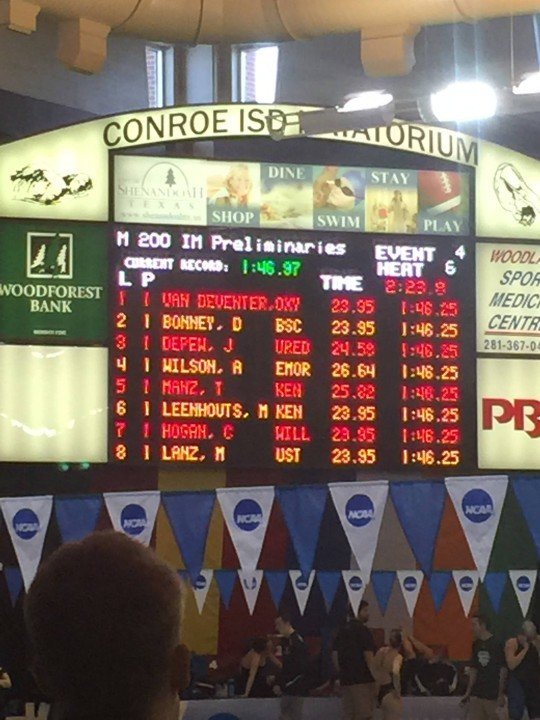 After the timing malfunction declaring an 8 way tie for the top time of the morning, Andrew Wilson of Emory stood on top of the morning times, holding a new NCAA record. Current photo via SCAC

At the DIII NCAA champs in Shenandoah, Texas, the prelims session opened with some serious swimming, including a new meet record set by Andrew Wilson of Emory. The previous record was set in 1998, making it one of the oldest D3 records on books. Until this morning, that is.

Due to a system malfunction, for a while it looked like we might have eight new NCAA record holders. After everything cleared up, Wilson took top time of the morning with his time.

Wilson took over seven tenths off the record set by Gary Simon, posting a 1:46.25 to take the top seed for tonight’s final. Joining him in slipping under the record by a tenth was Kenyon sophomore Trevor Manz. The race will be on tonight as the two face off again, also racing defending national champion Jeff Depew of Redlands and 400 IM record holder Hugh Anderson of Mary Washington.

Way to go Andrew! Great swim and better guy! Get ready everyone…. He’s about to wow you all this weekend.

Ohhhhhhh boy. This is gonna be even better than I thought tonight