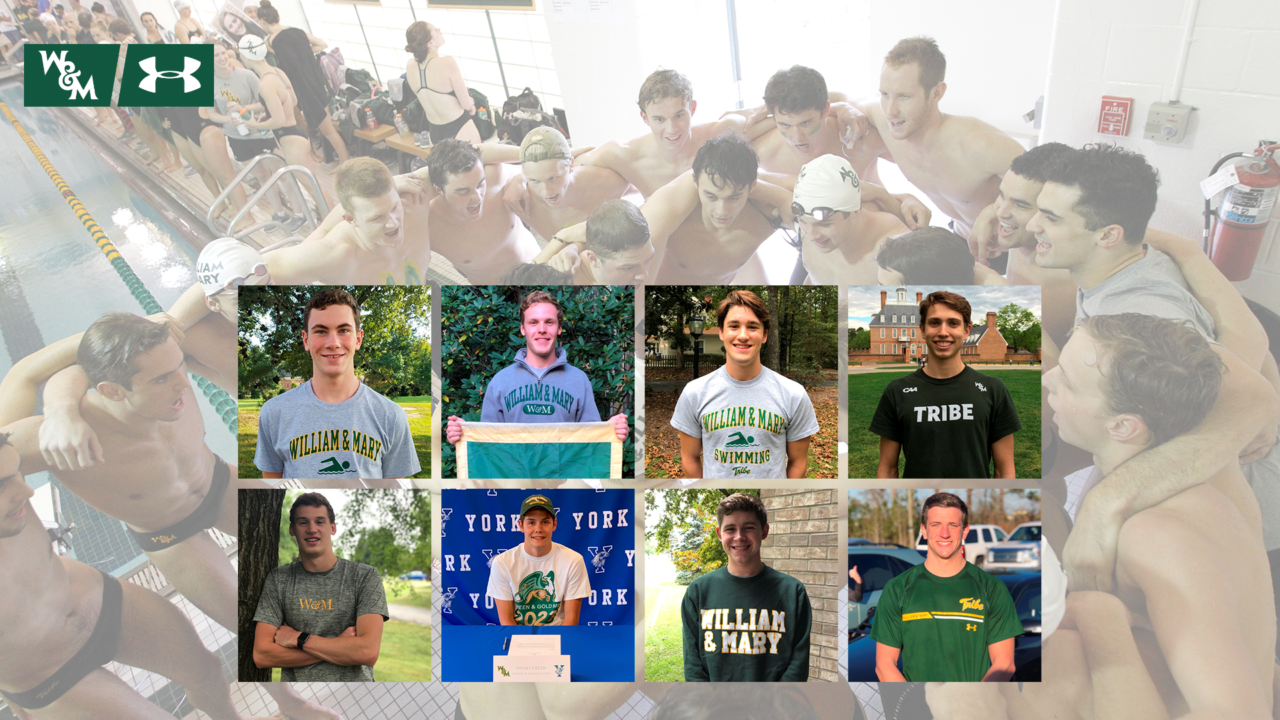 The William & Mary men’s swimming team will add eight freshmen to the roster ahead of the 2019-20 season, interim head coach Chris Carter announced today. The class includes seven athletes from Virginia, three of them from Williamsburg, as well as standout from Michigan. Combined, the eight men would have earned 23 finals spots at last year’s Colonial Athletic Association Championships, included nine bids in the championship finals.

“We are very excited to welcome these eight individuals in to our Tribe Swimming family,” said Carter. “This is a talented group who can contribute immediately, but will also continue to develop over the next four years. Not only will they be leaders in the pool and in the classroom, but they will continue to help build our community. In fact, five of them already have ties to William & Mary or the Williamsburg area. We are excited to continue winning CAA titles while also raising the national profile of this program!”

Prep
Winter and Summer Junior Nationals Qualifier in the 100m breast … All-American consideration in the 100 breast as well as the 200 medley and 400 free relays … All-State all four years … Virginia 4A State Champion in the 100 breast, the 200 medley, and the 400 free relay as a senior … Broke the 4A state record in the prelims of the 50 free, before finishing second overall … Led Lafayette to the district title in 2019 … Team finished second overall at the state championships … Won the 200 breast at the 2018 Virginia Short Course State Championships … USA Swimming Scholar All-American … Member of the National Honor Society … Also a member of the Latin Honor Society and the Key Club.

Personal
Son of Jeff and Kelley Crisci … Mother and father both graduated from W&M in 1994 … Mother was a member of the Tribe swimming & diving team as an undergraduate, and is currently an assistant coach for W&M as well … Enjoys fishing, spikeball, basketball, and drawing … Plans to major in either math or business.

Prep
2018 NCSA Summer LCM Finalist in the 100m free … Earned all-state honors in 2018 in the Virginia Independent School Athletic Association … Named honorable mention All-Met in 2018 by the Washington Post … All-league each of the last two years … Invited to the USA Swimming Zone Diversity Select Camp in 2015 … Participated in Harvard’s Pre-Collegiate Economics Competition … Earned Scholar-Athlete Awards from Potomac Valley Swimming in both 2017 and 2018 … Tutor at the Math and Sciences Collaboration Center … Bi-lingual Peruvian-American citizen.

Personal
Son of Dan and Jenny Demers … Father played football at Maine Maritime … Brother, Colin, is a member of the Tribe men’s swimming team and will graduate in 2020 … Enjoys going to the beach, movies, social events, and listening to podcasts … Undecided as to his collegiate major.

Prep
Winter Junior Nationals Qualifier in the 200 IM … First swimmer from his high school to qualify for the state championships … Member of the National Honor Society … Salutatorian of his graduating class … Vice President of the DECA Club.

Prep
Named one of just eight 1693 Scholars in the entire W&M entering class for 2019 (almost 1,700 students) … Program is a highly selective merit scholarship that fosters and encourages the best and brightest at W&M … Finished fourth in the 200 IM and fifth in the 500 free at the Virginia 4A state championships as a senior … Won the 1,000 free at the Virginia Swimming Short Course State Championships … Also finished sixth in the 200 breast … Fourth in the 200m breast and fifth in the 800m free at the 2019 ISCA TYR Junior Nationals (LCM) … 11th in the 200m breast at the 2018 USA Swimming Futures Championship in Richmond … National Merit Commended Scholar.

Both their head coach and assistant coach left the program….. who knows what’s going on?

They got great jobs. One’s the Head Coach at Princeton, and the other was hired at Missouri. The signs of a good and successful program!