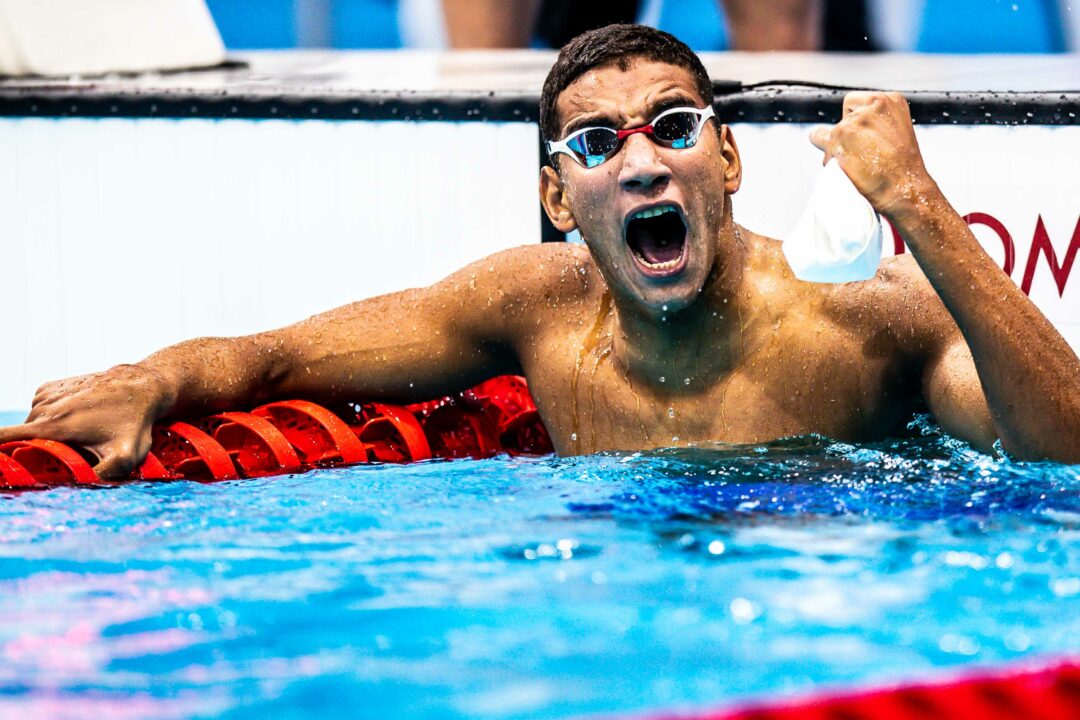 Every Olympics has its upsets, but would these unexpected medal winners have been the same if the Olympics had been held in 2020? Archive photo via Jack Spitser/Spitser Photography

How fast would Katie Ledecky be in a super suit? We try to answer that question.

This article originally appeared in the 2021 Year In Review edition of SwimSwam Magazine. Subscribe here.

In March 2020, it was announced that the Tokyo 2020 Olympics would be postponed to 2021 as a result of the COVID-19 pandemic — the first such instance in the history of the Olympic Games (previous games had been canceled but not rescheduled).

Immediately, many people started to debate how the postponement would affect the Olympic results. After all, there might be a few teenagers who would not be ready in 2020, but in 2021 they would be one year older and could cause real damage — and this indeed happened. On the other hand, some veterans could not keep their pace until 2021. There were even some retirements between 2020 and 2021.

There were some unexpected results, such as Ahmed Hafnaoui winning the men’s 400 freestyle. But every Olympics has its upsets. The question is: Would these unexpected medal winners have been the same if the Olympics had been held in 2020?

One quantifiable measure is looking at the 2019 world rankings. After that, comparing them to what happened in past Olympic Games, taking into account the world rankings in the year just before.

So, among those five swimmers, only Ledecky, Manaudou and Meilutyte were unknown internationally by the end of 2019. At that time, few people would have put money on them.

Let’s take a look at the 2019 world rankings and compare them to what actually happened in Tokyo. There were no fewer than 10 swimmers who were ranked outside the top 20 who won medals at the 2021 Olympics.

Three of them are noteworthy: Ahmed Hafnaoui, the winner of the men’s 400 freestyle, was ranked 123rd. Noe Ponti, bronze medal winner in the men’s 100 fly, was 98th in the world in 2019. And Lydia Jacoby, gold medalist in the women’s 100 breast, was 68th. We can say, almost for certain, that they would not have been on the podium if the Olympics hadn’t been postponed — maybe they would not have even qualified.

Jacoby’s journey is emblematic: She didn’t have a real shot of making the U.S. team in 2020 as a 15-year-old. Actually, by the beginning of 2020, she and her family planned to travel to Tokyo to attend the Games, and they had even bought tickets.

Sure, some of these swimmers were already internationally known by 2019 and 2020. Matti Mattsson won a bronze medal at the 2013 World Championships. Kliment Kolesnikov was not a real 100 freestyle contender before 2021 — but he was already a backstroke world record holder. And Hali Flickinger was a butterfly World Championships medal winner.

But what about the others? It seems very unlikely that some medal winners in 2021 like Tom Dean, Kate Douglass, Brendon Smith and Kieran Smith would have won medals if the Tokyo Olympics had happened in 2020.

Of course, if the Olympics hadn’t been postponed, maybe we would have seen other previously unknown swimmers winning medals in Tokyo. It’s impossible to say how many.

But, coming into 2021, the last reference in long course meters we had was basically the world rankings by the end of 2019. After all, because of the pandemic, there were few international meetings in 50-meter pools in 2020. In fact, witnessing 10 swimmers who were not ranked among the top 20 in the world winning Olympic medals is striking. But, maybe paradoxically, a higher number of new names rising to the podium were expected. After all, many things can happen in the interval of one year.

I think the answer is pretty obvious: Instead of the Olympics being roughly 6 months after the last major event, it was over 18 months after, during which there were massive changes, young guns improved massively, and training for some was heavily impacted.

On the women side Hosszu, Pellegrini, femske, ranomi and Belmonte were really afected on my opinion

Katinka can only blame herself. She doesnt have real a coach since 2019.

Okay… but you really haven’t answered your own question. Why?

Maybe he is hoping that we are going to provide the answer to his question?

Cullen Jones won the silver medal in the 50m free at the 2007 Worlds. Ben Wildman-Tobriner won the gold.

Pretty sure they tied

You are not correct. Less than a tenth back.

The men’s 400m free was the slowest since 1996. Anyone could have won that race last year – even a ham sandwich floating along on a paddle board. If Mack Horton hadn’t apparently lost his form, he would have easily defended his Olympic title.

How does it feel to be slower than a ham sandwich? I notice you didn’t win it.

Then why weren’t you on the podium getting gold?

Because they’re full of baloney.

Not sure about the ham sandwich, however my thoughts on reading the article did go straight to the 400m times, it was a very slow final given we’ve had 3.40, 3.41 swims since year 2000. Both Aussie qualifiers were fast at trials but swam much slower in Tokyo. Elijah Winnington (3.42.6) and Jack O’Lachlan (3.43.2) just couldn’t improve on their trials efforts, which opened the door for others at the Olympics

Maybe because nearly a year’s worth of championship level meets were postponed or cancelled and we didn’t get to see the results of their development until the Olympics?

It’s because postponing the Olympics a year disrupted the usual cycle. Typical cycle: vets/favorites go to the Olympics and do their thing, up and comers stay home and do the works for the next Olympics. Then the following year, you start to see the up and comers break out a little, make the Worlds team or whatever, come into their own a little more… 2021 would have been their breakout year, regardless. But instead of that breakout happening at Worlds, it was at the Olympics.

For example, Lilly King would have won gold in the 100 breast in 2020. Lydia Jacoby wouldn’t have made the team. But give Lydia Jacoby another year, and you see what we got. If the… Read more »

Lydia Jacoby story was awesome… she made trials and was ready to go watch the olympics but ended up making them! boss right there.