Which Coach Will Simone Manuel Train With at Arizona State? 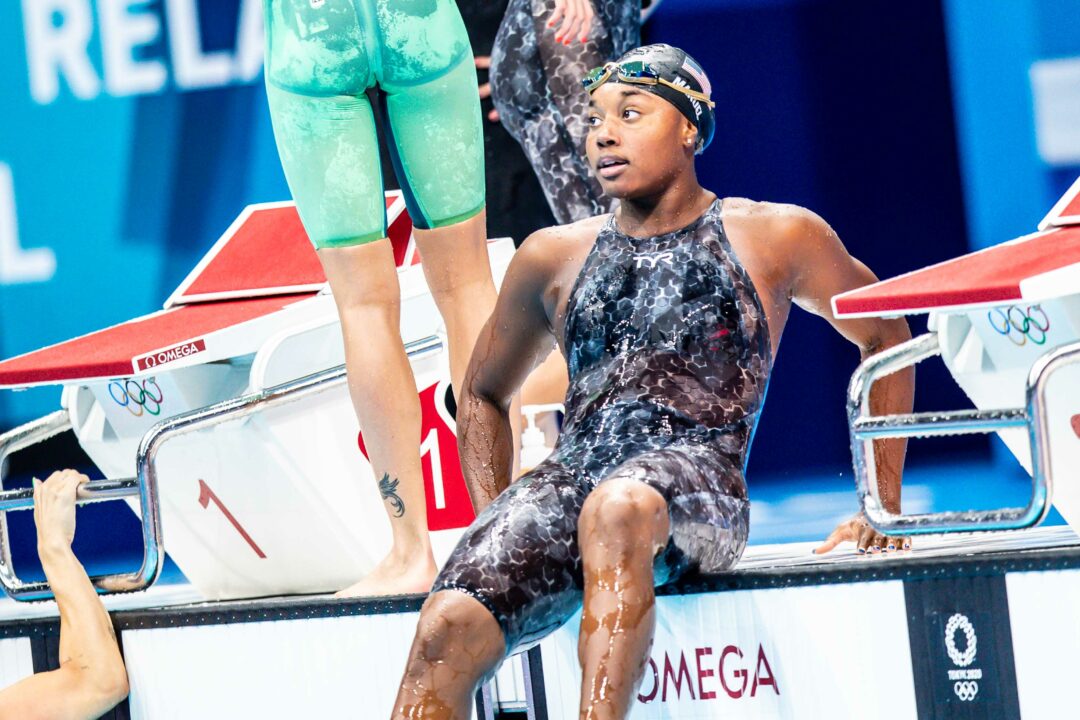 Simone Manuel is training primarily with Bob Bowman, for now, but Arizona State has a deep and robust coaching staff to work out their growing pro group. Archive photo via Jack Spitser/Spitser Photography

Arizona State head coach Bob Bowman says that the newest addition to his sprint group, Simone Manuel, is training primarily with him, at least for the time being.

Manuel hasn’t raced and trained full-time since the Tokyo 2020 Olympics, where she swam only a relay leg after winning medals in the 50 and 100 free at the Rio 2016 Olympic Games. Prior to the Olympics, she was diagnosed with Over-Training Syndrome (OTS).

This raised questions about Bowman’s training style and whether it was a good fit for Manuel, considering that diagnosis. On a podcast with Coleman Hodges last week, though, Bowman said that his groups only peaked at around 6,000-7,000 meters, which is far-from the highest volume program around. He did say that he’s more of a ‘short interval’ coach than a ‘race pace’ coach within that volume, though. Bowman is also famous for his lectures about the “full toolbox” when it comes to coaching. Manuel is also a very intelligent, educated, and ‘professional’ athlete, and it’s hard to believe that she would have made this decision without a long consideration about the training style she’s looking for and weighing that against what she’s getting at Arizona State (which probably included a trial period).

The Arizona State coaching staff has been a little tight-lipped about who is training with which coach, preferring to share the credit among the staff, but they have revealed on previous podcast episodes that Ryan Held trains mostly with Herbie Behm, Olivia Smoliga splits time between Bob Bowman and Rachel Stratton-Mills, and Hali Flickinger is primarily with Bowman.

Given the focus and history between Kalisz and Bowman, it tracks that he will primarily train with Bowman. It seems likely that Jay Litherland, a 400 IMer, will train with Bowman as well (alongside the 400 IM World Champion Leon Marchand).

But one of the beauties of being a pro in a collegiate training environment is the presence of a diverse staff and the ability to tweak training modules without having to pick-up-and-move to another pro group. And maybe that is what attracted Manuel to Arizona State – the staff has two coaches that have produced US Olympic medalists as a head coach (Bowman and Stratton-Mills), one of the hottest young sprint coaches in the country (Behm), and the darkhorse on the staff Derek Schmitt, who has less coaching experience than the rest, but is the brother of American swimming legend Allison Schmitt.

That is a lot of experiences and a good web for Manuel to surround herself with. We don’t yet know exactly what “Swimone 2.0,” as she has dubbed her path forward, looks like, and she might still be figuring that out too. But it feels like she has learned a lot more about what she wants and needs in swimming in the last 18 months, and with the number of ‘brains’ on deck in Tempe right now, including Manuel, if the right training exists for her on that staff, they’ll work it out.

Herbie is one of the best swimming minds in the country. If I was a college age or pro ability swimmer, I’d choose ASU.

The one who can deliver a sub 53.00 flat start (as opposed to rolling start) in the women’s 100 meter freestyle.

Maybe her future husband is working in Arizona?? She announced she is getting married.
I love Bowman but, I don’t think he is the ideal sprint coach. Unless she is trying to get in the 200 more, and the 50 less.

An ideal situation for her might have been Dressel and Nesty. Maybe why not try 1 year outside the US? France are producing great sprinters again, Italy too. Also, Bucareste with popovici maybe was perfect. The guy is perfect in the 100 and 200, and amazing for his age in the 50.

Why not Australia for 1 year. I don’t think the aussies would have said no to her.

True question. Wasn’t Troy coaching Dressell up until the last year? The last year has kind of been a mess for Dressell since the switch

Dressell was already struggling with mental issues before the switch.

All to stay relevant. I hope any USA swimmer does well in international competition but this seems like more of a show than substance.

Maybe she only got overtrained because of the pandemic causing all the taper meets to be postponed a year. If I recall right she was one of the few swimmers that had pool time almost the whole way through with the only missed pool time being at the beginning of the pandemic so maybe the volume of training would’ve been fine if she substituted a national meet like the US Open as a taper meet.

The Pandemic screwed up the rhythm of nothing else. Imagine building up to something that big, only to be told the plug has been pulled two months before it all. And if you want to do it, you got another year of all that training and preparation — not jus physically but mentally. And that break you were going to take to reward yourselves after the big meet? It won’t be in three or four months, but in 16-18 months. It messed with a lot of people, especially the favored veterans.

She also may have over trained in a panic over her temporarily lack of pool time. Generally though, the pandemic was a weird time for everyone. There were likely multiple factors.

Yes, exactly who I thought she’d go with to resolve her ongoing overtraining syndrome… Bob Bowman

Why even read articles when there’s so much dirt to stir up from a headline…. exactly….

Simone’s issue was as much mental as it was physical. Maybe more. Bob worked with Allison Schmitt through all the mental health challenges she had quite well. I think he should be able to work with Simone.

I’d say she needs to try something outside the box with her comeback. Maybe some heavy weight room and dry land stuff combined with 8-10 hours week of intense pool time. Yeah I have no idea what I’m talking about

I actually agree, but she won’t find that on the ASU staff.
Herbie has produced no one (held and olivia swam poorly as well). Stratton-Mills has been irrelevant for years, so Simone goes with Bowman based on the results of a good 200/400Imer?

A bit unnecesarily harsh on the ASU staff.

Stratton-Mills produced high end swimming athletes out of an urban setting (Asphalt Green in NYC) that did not have nearly the same quality of performances before Rachel was there. That included a US sprint Olympian (Lia Neal) who was a teammate of Manuel’s both at Stanford and then on the Rio Olympic squad. Neal made our Olympic squad in London out of Rachel’s program and then repeated out of Stanford while training with Simone. I suspect Simone got a great deal of personal insight as to Rachel’s abilities from Lia before committing to the ASU pro group.

“Herbie has produced no one.” Wow. I guess everything is relative, eh? Herbie was… Read more »

My point still stands- Herbie had some school records and Stratton Mills had Neal in 2012. In comparison to their best times, Held and Smoliga did nothing special.
Simone training with a 2/400 IM coach is a bit odd considering you have coaches like Coley (who coached some pretty good 100 freestylers-Held/Weitzeil/Condorelli/Margo) and Salo (Hardy/Soni/Lezak among others) still coaching only pros.

In reviewing the hard, bitter edge to your posts, you never had a real point.

Held chose to leave Coley and has currently chosen to swim with Bob/Herbie; and while his 50 was faster with Coley in a local no pressure meet, he had a good 50 and better 100 with Bob/Herbie. Weiteil was over a second slower this year than her best(:52.99 v :54.01) and while Olivia was 0.77 off her best at the Team Trials (:53.55 v :54.32), with Abbey and Olivia both likely disappointed in their Team Trial swims(7th and 8th, respectively), Olivia was significantly closer to her PB than Abbey.

Or maybe spend some time getting to know what makes the Aussie women’s sprint success so profound? Salo said it himself, they’ve got a good thing going on down there we can’t seem to tap into here in the states. For starters, they don’t seem to spend nearly as much time in the weight room as U.S. swimmers…

And if we are truly going to talk about outside the box, she would have ended up with Salo or Coley. Not saying either is the right answer, but those are far more in that direction than Bowman’s “build the cup and fill the cup” methods.

I haven’t forgotten her wins or her time as U.S. number one sprinter and her time as number one in the world, but as you said that was then and this is now. She is currently not that swimmer, hasn’t been since 2019.

The comments were in reference to armchair QBing that was and does take place in the comment threads.. that’s what happens here, right? The sharing of ideas and opinions in a respectful way. Are we not allowed to speculate?

I would absolutely hope she knows herself better than me, not really sure what you’re upset about. Not sure she needs you to come to her defense over a simple opinion based on what Dave Salo shared and… Read more »

Whatever it is, Simone tapped into it at every major international competition from 2016-2019. The big piece of the puzzle is what happened in 2021. All the stuff with the delays and COVID affected her in some way.

Very true. But some people say go across the world and train with the people you’re already beating. There is only one Aussie that is swimming the same or better times than a peak Simone. She’ll be fine