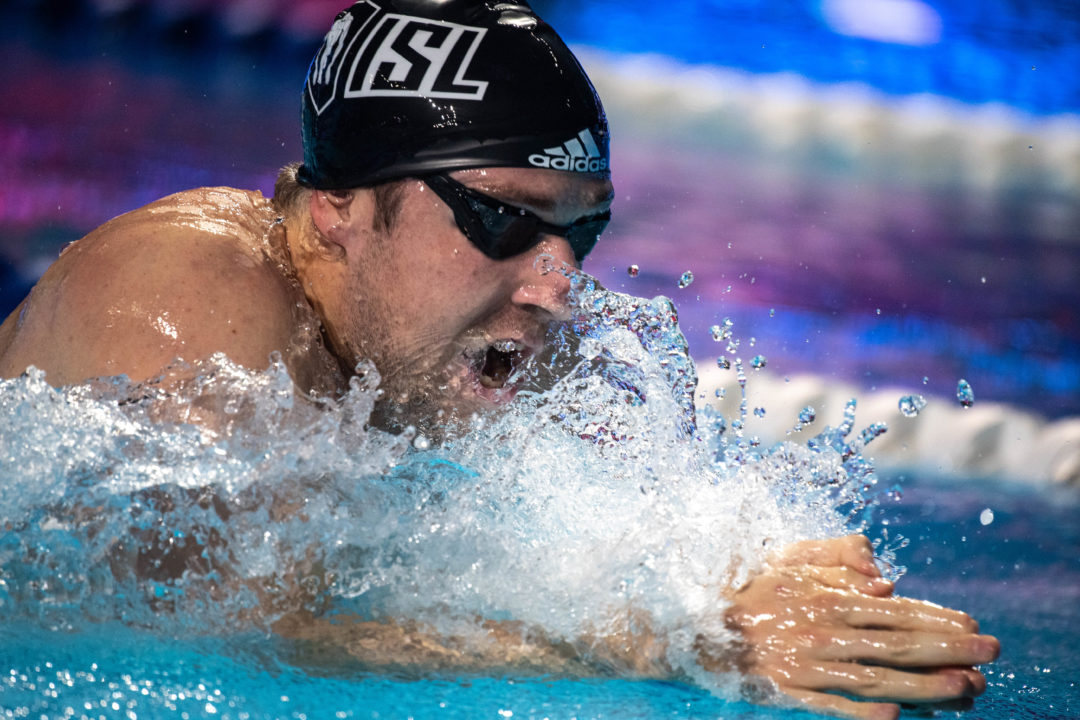 Analyzing the data on how things would be different if the clubs were flipped during the ISL's opening weekend. Current photo via Mike Lewis/Ola Vista Photography

After taking a look and how the scores in the International Swimming League’s second match would’ve look after day one if we swapped out the London Roar for the New York Breakers, here’s an extension on that since the meet has concluded, along with the process for coming up with the numbers.

For most events, it’s very straightforward to just swap out athletes from one team for athletes from another team. Just pick the right list of people, sort, score. But there’s one event on the ISL schedule that isn’t quite so simple, and becomes even less simple this season, and that’s the Skins.

In real life in the first matchup, the Cali Condors won the women’s medley relay and the LA Current won the men’s, picking breaststroke and backstroke respectively. In the second match, the London Roar won both relays and picked backstroke for both. But simulating what would happen if the teams were different for the two matchups isn’t just a question about hypotheticals about Skins, and how someone might have performed had they gotten one round further than they actually did. It’s also a question of what stroke would even happen. Since in this alternate lineup of Cali/Energy/London/LA, the ‘Dors would still win the women’s medley relay (and obviously choose breaststroke) and the Roar would still win the men’s relay (and not-quite-as-obviously choose backstroke), in the other matchup the DC Trident would now win the women’s medley relay while the Aqua Centurions would win on the men’s side (not only that, they would have gone 1-2 in the medley relay, with Iron over 3s back). The Trident, having Linnea Mack, would likely have still picked backstroke which still gives us plenty of data to use. But the Centurions would absolutely not have picked backstroke (as Fabio Scozzoli said: “any other stroke except backstroke was good for us”), they would almost certainly have picked butterfly — where Szebasztian Szabo has the top time in the league this season by nearly 4 tenths.

Before we dive in, here are the actual results of the two matchups, including the top 10 MVP point scorers (which only includes half of the skins points):

Let’s start by first skipping the Skins entirely. What would the hypothetical matchups look like – up to, but not including, the Skins? Granted, this is missing 170 points in each matchup, but gotta start somewhere. This gets us to the Cali matchup looking like:

This is already quite notable. London won the second matchup convincingly, yet when put against Cali and Energy, they’re well out of the picture and basically tied for last with LA heading into the skins. Likewise, NY was a total non-factor in the first matchup, yet here is leading a fairly tight four-way race.

Now, let’s see what we can do with the skins. We have four events to properly simulate. It’s quite difficult to simulate skins since everyone is so different. Lilly King’s third round was her fastest and Molly Hannis improved from the first to the second. Lots of people were 3-4% slower from the first to second round, then Kira Toussaint went from rattling the world record in the first round to going a full 7% slower in the second. For the sake of argument, I am going to slow everyone down by 4.5% from round to round if I don’t have times for them. It seems like a safe-ish guess, and we’re just having fun anyway.

1. Men’s Backstrokes: Cali vs Energy vs London vs LA

This was the most straightforward of the four, since both matchups picked backstroke as the men’s skins and I didn’t need to make up times for anybody. The top four in the first round were the Current’s Ryan Murphy (22.80), the Roar’s Guilherme Guido (22.88), and the Condors’ Justin Ress (23.20) and Coleman Stewart (23.26). No jackpots for anybody.

2. Women’s Breaststroke: Cali vs Energy vs London vs LA

This is the second most straightforward of the four. London’s Alia Atkinson certainly would be a strong competitor, she was 29.20 in the individual 50m breaststroke while Lilly King led the first round in 29.16. The new top four would thus be Lilly King, Alia Atkinson, Benedetta Pilatto, and Molly Hannis, with Imogen Clark bumped to 5th.

Not knowing how Atkinson would do in the second round, I somewhat arbitrarily am adding 4.5% to her time, which gets her to 30.51. The other three all went faster – King in 29.25, Hannis in 29.66, and Pilatto in 29.71, which also means that King jackpots Atkinson. Could Atkinson have done better than this? Sure. Some day soon we’ll probably find out. Until then, this leaves King and Hannis in the final and we already know how this turned out.

3. Women’s Backstroke: NY vs Iron vs Aqua vs DC

As before, one matchup didn’t have backstroke for skins, so we have to borrow for the individual 50m. However, the Lady Breakers did quite badly in the 50m backstroke, so this doesn’t end up mattering too much. Instead, the absence of the London sprinters throws a more interesting wrench into the picture – since now the top four are the Trident’s Linnea Mack (26.37), who jackpots both Breakers, Iron’s Ranomi Kromowidjojo (26.69), Aqua’s Etienne Medeiros (26.73), and Iron’s Caroline Pilhatsch (26.81).

Neither of the latter two made the second round in real life, so as with Atkinson, I’m just adding 4.5% to their times. This ends up preserving their relative order with the two women who did make it to the second round, so Mack and Kromowidjojo make it to the third round. But Kromowidjojo didn’t make it to the finals in their matchup, so again I’m simply adding time, which means I’m actually crowning a new skins winner: Linnea Mack! Not only that, but she would end up jackpotting in the final as well, earning DC 42 points for her efforts.

4. Men’s Butterfly: NY vs Iron vs Aqua vs DC

The biggest obstacle in this whole simulating-skins endeavor would be the men’s skins in this matchup. Aqua would’ve won the men’s medley relay, so they would’ve picked butterfly for Szabo. But there were no butterfly skins to choose from in each matchup. All I have is the individual 50m butterfly event. So I’m basically just taking the top 4 out of that event (Szabo, Nicholas Santos, Matteo Rivolta, and Joe Litchfield) for the second round, and the top 2 for the third round, and crowning Szabo the winner.

What’s the end result of this madness?

In the Cali/Energy/London/LA matchup, the Condors still win, while London finishes last:

And in the NY/Iron/Aqua/DC matchup, carried by Szabo in the butterfly-skins-that-weren’t, Aqua wins with Szabo as MVP, though a much closer four-way meet overall:

Useful data point to add about London finishing last in this matchup:

One stat (I don’t know how interesting this ends up being) is what the average finish is of the top swimmer (excluding skins but including relays). In the real matchups:
While in the alternate matchups:

On the flip side, looking at the average finish of each team’s second person gives a good sense of depth. So Iron’s best person averaged 4.57th place but their 2nd best averaged 4.81st. DC’s 2nd place finisher averaged 6.59th.

Really interesting analysis – esp for us stat-heads. The talk about London Roar before the start was that they had been seriously weakened by the exit of the Aussies. Of course that is the case, but the second theme last weekend was that they were missing a number of other swimmers that will make them stronger here on in. We don’t see them this weekend, so will be interesting to see where they are at on weekend 3…

Can’t wait for the Frog Kings!!

This season offers a unique opportunity to team coaches. In the bubble, they have all their swimmers together every day, not just gathered for matches. Therefore, they have the chance to target a certain match they think it’s important for their team and rest everyone for it. This strategy could prove useful for teams that are on the verge of making the semis. For example in the third week Breakers will face both Centurions and Titans. From these three teams the one that will finish higher in that match, most likely 2nd place behind Energy, will gain a big advantage.

TL;DR for us working folks?

NY Breakers is a better team then you might think after Match 1, just really unlucky with the draw of match-ups.

This is true. With all times and entries the same, Breakers would’ve been leading going into skins in Match 2. They don’t have good medley relays, and with MA not swimming well, they probably would’ve finished 3rd after skins in Match 2.

If MA swims better, they’re probably the 7th-best team in the league, +/- 1 depending on how Toronto looks when we actually get them in the pool.

Breakers also have Alicja Tchorz on their bench. Getting her into their active lineup should make a significant impact, and I’d expect that to happen this week.