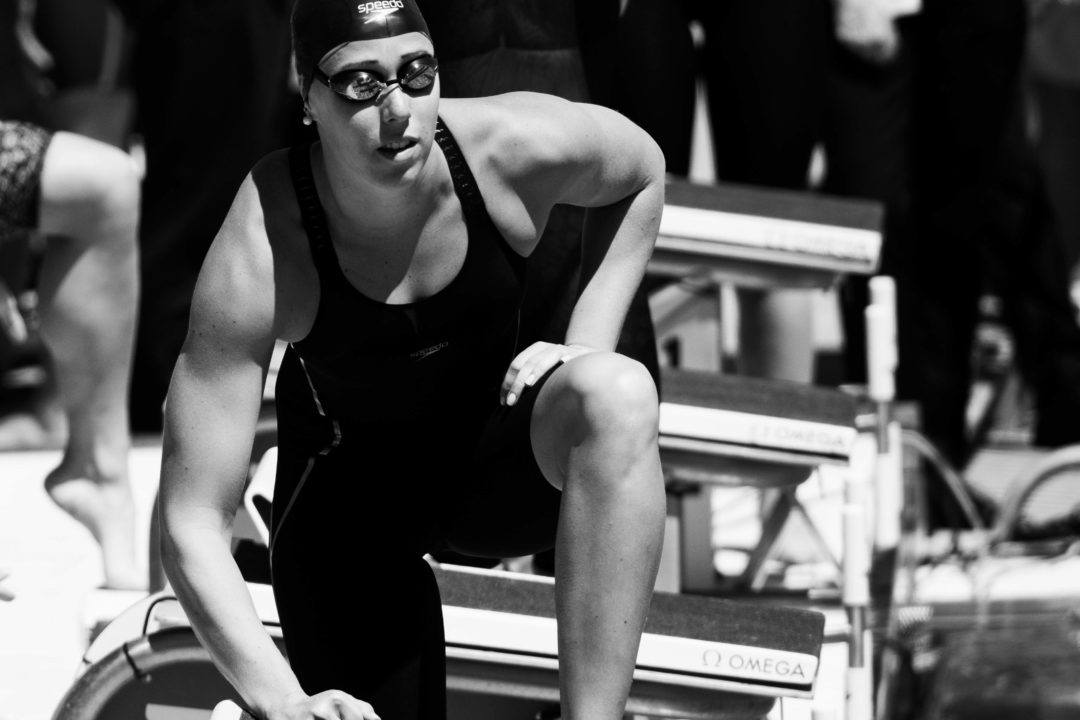 Cal's Abbey Weitzeil blasted the #1 time in the country in the women's 50 free at day 1 prelims of the Georgia Fall Invite. Archive photo via Mike Lewis/Ola Vista Photography

There were a ton of fast swims during the first preliminary session of the 2018 Georgia Fall Invite, including the fastest 50 freestyles in the country coming from Michigan’s Gus Borges and Cal’s Abbey Weitzeil. Read a full recap of prelims below.

Cal first and second years Alicia Wilson and Sarah Darcel were also under 1:57 for 2nd and 3rd in 1:56.84 and 1:56.85 respectively, with Wilson’s swim being a massive personal best. This is her first season swimming yards after coming over from Great Britain, so she takes down her old best of 2:01.86 set at their dual with Texas a few weeks ago.

Weitzeil blasted a time of 21.62 in the women’s 50, getting her under the NCAA ‘A’ standard of 21.74 and moving her past Arkansas’ Anna Hopkin (21.64) for the fastest time in the country. Weitzeil’s fastest swim ever during invite season, done last year, is 21.44.

Morgan Hill of Virginia was just .04 off her lifetime best to qualify 2nd in 22.19, and Veronica Burchill of Georgia was also under the time that qualified for NCAAs last season (22.30) in 22.20. Maggie MacNeil, a Michigan freshman who has been 22.08 already this season, hit that time right on the mark for 4th overall in 22.30.

Felix Auboeck came into this weekend as the fastest swimmer in the country in the men’s 500, and does head into tonight’s final as the top seed, but he still lost his #1 ranking this morning as Andrew Seliskar blasted a 4:13.02 swimming exhibition.

This was Seliskar’s first time swimming the event since high school, and improves his previous personal best of 4:16.17 by over three seconds. He moves past Auboeck’s 4:13.06 from the ACC/B1G Challenge for #1 in the country.

Auboeck was a very solid 4:13.78 this morning to qualify 1st for the final, followed closely by his Wolverine teammates Ricardo Vargas (4:13.97) and Patrick Callan (4:14.00). They move to 4th and 5th in the NCAA, with Vargas recording his 3rd fastest swim ever and Callan his 2nd fastest, just .22 off his best time.

Walker Higgins of Georgia was less than a second off his lifetime best for 4th in 4:15.16, and Cal’s Trenton Julian dropped close to eight seconds to qualify 5th in 4:15.33. They were all under the NCAA invited time from last season (4:16.08).

His teammates Zheng Quah (1:43.82) and Mike Thomas (1:43.84) also cracked 1:44 for 2nd and 3rd, with Quah’s swim his 2nd fastest ever. They were the only three under last season’s invited time (1:44.03), while Javier Acevedo of Georgia did have a notable return to action after breaking his foot at the beginning of the season, advancing to the final and achieving a new personal best of 1:44.62 (6th overall).

Wolverine sophomore Gus Borges threw down a time of 19.11 in the men’s 50 for the top time in the country, surpassing Robert Howard‘s 19.23 from two weeks ago. The swim also improves on his previous best time of 19.26 from the 2018 Big Tens.

Excited to see what they go tonight

Still no Eva Merrell, safe bet that she is red-shirting this year?

I read somewhere on here that she is readshirting this year

Too bad.. But I suppose its good for Georgia come next year, with them only losing a handful of seniors

Yeah. It’s the Townley approach (along with most other great 200LCM freestylers) I think seeing that he went 1:43 after was also pretty amazing. If he continues on this he could be a serious (not that he wasn’t already) in a couple events come 2020

Think we’ll see him make big moves at worlds next year. Seeing him put it together in long course this summer was a joy

He is on a roll and seems well prepared for a fantastic 2019 season .