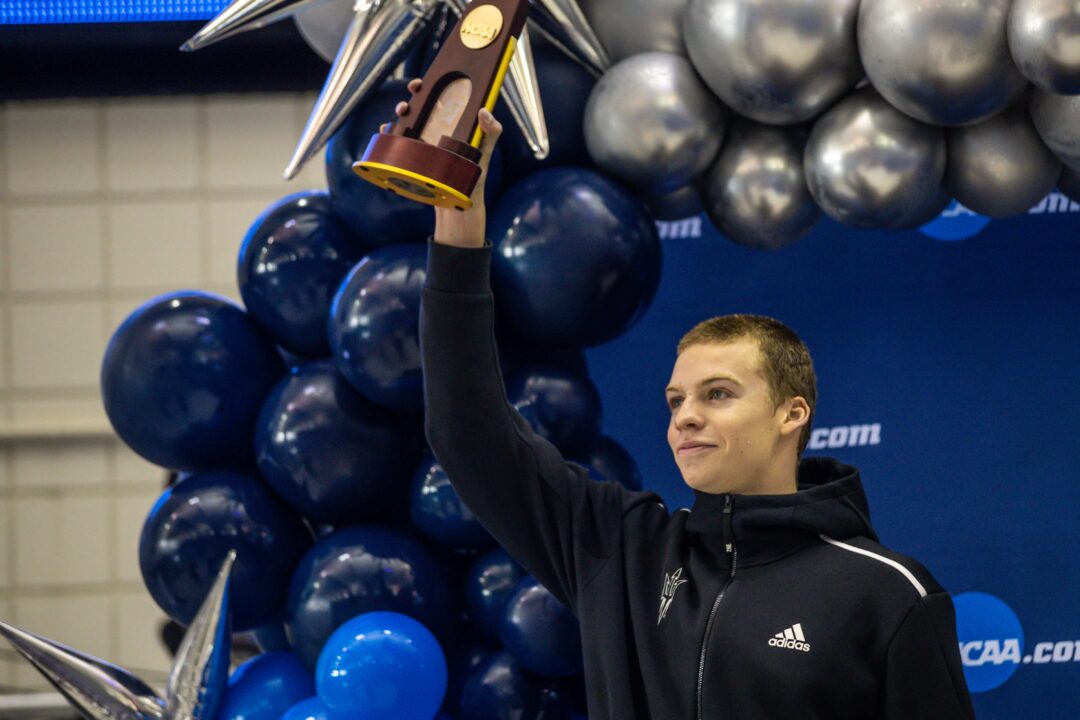 Marchand swam went a total of 3 for 3 of #1 times in the NCAA this season on Saturday. See his NCAA Record in the 400 IM here. Archive photo via Jack Spitser/Spitser Photography

In a new video on Wiffen Twins, the YouTube channel he shares with his brother Nathan, 21-year-old Daniel Wiffen broke down his record-breaking swim.

What Happened In The Men’s 50 Backstroke Final?

Chaos ensued in the men’s 50 back final due to a system error, with Ryan Murphy walking away with gold despite Isaac Cooper beating him head-to-head earlier.

Chad le Clos used his elite turns to rally past Daiya Seto, with his dad, Bert (right), erupting each time he emerged from his underwaters to close the gap.

Leon Marchand continued to shine this weekend setting a new NCAA record in the 400 IM Saturday while suited up in Arizona State’s dual meet against defending NCAA Champions Cal. Marchand can be seen in the video above in lane four suited up in blue. He gets out to a quick lead and is clearly the first to touch at the 50 mark.

Marchand broke Hugo Gonzalez‘s record of 3:32.88 which he set at NCAAs last year. Gonzalez can also be seen in this race, right below Marchand in lane three. Gonzalez was not suited up and ended up swimming a time of 3:57.92 to finish fifth.

Marchand swam a total of four of the top times in the NCAA this weekend, including going the top time in the 200 breaststroke twice.

His 400 IM here was his fourth event of the dual meet after already competing in the 200 medley relay, 100 breast, and 200 breast. Notably, it was estimated that there were about 35 minutes between his 200 breast and 400 IM.

“Video unavailable due to copyright claim by Kyle Sockwell”

talk about showing your true colors

1) exposes Buttstroke as his burner.
2) don’t normal people just stick their own ads on copyright claimed videos and let them run?

Yeah, he should have let the other swimmers finish before celebrating on the lane line.

He was caught up in the excitement which is understandable, but staying in your lane is the most basic of all the rules.

Great product. Excellent performance.
Not talented as mp, but definitely hard worker as mp and jeah.
So much ahead of the domestic and international field, that everyone will have tough time catching him up at his motherland in 2024.
This kid stays healthy next few cycles, we’ll see him break 4′ and goin sub 1.53 in the im’s. It is another solid athlete+coach match up.
No matter, how much we want to see mp and Ryan’s names next WRs, the reality is that world is swimming fast.

Unpopular opinion, but Marchand should’ve been DQ’d for entering the Cal swimmer’s lane before he finished during his celebration.

With that being said, that swim was unreal and I’m glad he wasn’t DQd, but an a-hole stroke judge easily could’ve disqualified this amazing swim, gotta be careful.

I was thinking the same thing when he got up on the lane line and his left gluteus Maximus was in the other lane. Is dscott still paying attention to this comment section? Since I think you were there and in contact with the officials, was there ANY discussion from them? Did you think that might have been a DQ? Probably home pool advantage controlled this situation . Discussion with Bob and Herbie needed for Mr Marchand !!!!

There was a short official conversation after that happened, but nothing came of it. He could have easily been DQ’d for that, but I’m sure the Cal Coach wasn’t going to complain or enforce, which says a lot about Durden.

Thanks for the details . Yes, if Durden ok’d that decision and didn’t push it, he is a very cool coach !

Since when does the opposing team’s coach get to decide if someone is DQed. Swimmers get on the lane line all the time these days and I’ve never seen anyone DQed for it. I don’t think it’s smart to do, but until someone noteworthy gets DQed, it will probably continue.

This video doesn’t show it, but in the Social Kick podcast video, they show that he falls into the lane after getting on top. It was cut out in this video.

I gotta admit right after the finish (Marchand’s finish) I was a bit … distracted by the atmosphere. I honestly didn’t even notice him on the lane line and didn’t notice any comments on deck about it, though there certainly could have been without receiving my focus. Sure hope it was a learning experience and won’t be an issue in any future, more important races.

Unreal. The guy is a master class in just about everything but how he is able to maintain his underwaters is absurd. He must have some combination of the largest lung capacity every and the world’s greatest anaerobic system. He can probably hold his breath for 4 plus minutes.

Inherited from his successful swimming parents plus an outstanding work ethic.

Don’t doubt dscott on the meet logistics of ASU and Mona Plummer . If it is who I think it is, he knows the inner workings of ASU and all meets hosted at MP. This time was legit and scary fast . If I’m Hugo , I’m wondering if I should just hang it up . If I’m Chase, am I thinking Paris and how to approach swimming against my ASU workout buddy in his HOME COUNTRY ? Big challenges for both guys.

Another thought on Paris 2024. Think about the Marchand press frenzy for him! This could be something of a distraction. We shall see

Chase trains with Marchand. I am sure it was not a complete surprise to see him go this time. He had to guess he would be close by what he is doing in practice.