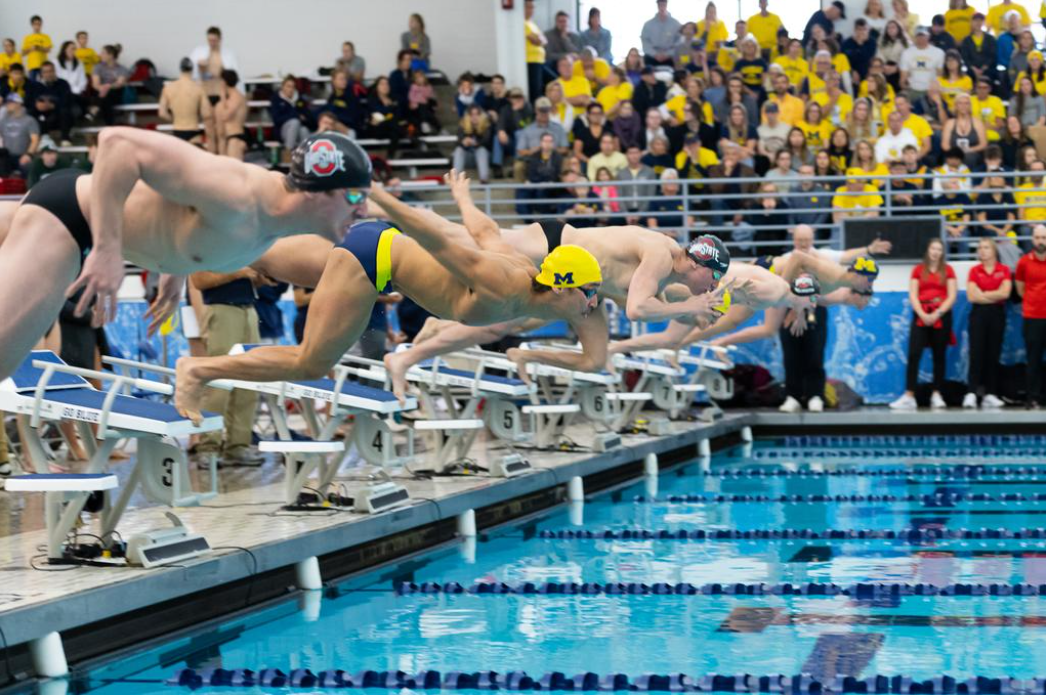 Michigan hosted Ohio State for a Big Ten dual meet on Saturday. A week after falling to Indiana in lopsided fashion on the road, the Wolverines performed much better against the Buckeyes, though they still ended up on the losing side in both the men’s and the women’s meet. For its part, the men’s meet was a thriller, coming down to the final race.

Michigan fell behind early but battled back, setting the stage for a final showdown in the 400 free relay. In order to win the meet, the Wolverines needed to win the event and take third with their ‘B’ relay. They accomplished the first task, winning the event with their ‘A’ team, but their ‘B’ squad ended up finishing fourth, about 1.5 seconds behind Ohio State’s ‘B” team.

Though Michigan lost the meet, it was a much more positive showing than they had the previous weekend against Indiana. On the the other hand, this was a huge win for the Ohio State men’s program, which has historically fallen short to the Wolverines. With this loss, Michigan’s men’s team is now 73-13-2 all-time against the Buckeyes.

Alex Quach was a force to be reckoned with for Ohio State. Not only was the Australian native excellent on the relays, Quach also won both his individual events (sort of). The caveat there is that Quach tied for first in the men’s 100 back, swimming a 47.34. Michigan’s Wyatt Davis also clocked in at 47.34, making the tie. Davis was out a hair faster than Quach, 22.79 to 22.99 on the first 50, then Quach inched back into it on the final 50.

One of the top distance swimmers in the NCAA, Ohio State’s Charlie Clark was in charge at this meet, sweeping the men’s distance events. He kicked things off with a very solid dual swim of 8:58.07 in the 1000 free, finishing 15 seconds ahead of the next-fastest swimmer. Clark also negative split the race, going 4:29.56 on the first 500, then coming home in 4:28.51. He went on to win the 500 free in 4:24.46, again winning the race in convincing fashion.

On Michigan’s senior day, fifth year Jared Daigle managed to pull out the win in the 200 IM, clocking a 1:47.09. Daigle was right in the thick of it at the halfway point, but a field-leading 30.71 breast split gave him the lead, which he maintained through the free leg.

The women’s meet was a bit more of a lopsided affair, seeing Ohio State win by a 73-point margin. The win is a huge one for the Buckeyes, as Michigan had dominated this rivalry until recent years. The Wolverines had beaten Ohio State for six straight years (2014-2020) before the Buckeyes started to gain momentum in the last few seasons. The rousing win here certainly has implications for the Big Ten Championships next month, which notably are being held at Michigan.

Ohio State’s Felicia Pasadyn, who is in her first season with the Buckeyes following a stint at Harvard, was a double event winner. She first won the 200 fly, clocking a 1:58.84. She got out to the early lead, then expanded that lead on the third 50 before dying a bit on the final 50. Michigan’s Katie Crom was coming on strong at the end, but barely ran out of pool, touching second in 1:58.96, just 0.12 seconds behind Pasadyn.

Pasadyn then went on to win the 200 back in 1:57.48, again getting out to an early lead. This time around, she actually pulled away from the field on the final 50, ending up touching the wall first by over a second.

Michigan wasn’t without its bright spots, however. In fact, the star of the women’s meet may have been Michigan sophomore Letitia Sim, who won three individual events on the day. Sim swept the breaststroke events, which is particularly notable as she was going up against Ohio State’s stellar breaststroke group, which includes Hannah Bach and Josie Panitz. In the 100 breast, Sim swam a 1:00.41, touching out Panitz, who was second in 1:00.78. The pair were separated by just 0.03 seconds at the 50 mark, but Sim was able to come home a bit faster than Panitz, earning her the win.

In the 200 breast, Sim again got the better of Panitz, clocking a 2:11.47 for the win. This time around, Sim had built an early lead on the front half of the race, then Panitz closed the gap on the third 50, and Sim was able to pull away again on the final lap. Panitz was second with a 2:12.11.

In another huge swim for the Wolverines, Lindsay Flynn got the win in the 50 free, touching in 22.46 to beat out a trio of Buckeyes. Flynn would then go on to beat Ohio State’s Amy Fulmer head-to-head in the 100 free, posting a 48.95. She beat Fulmer (49.47) handily, out-splitting her on both 50s.

Fulmer had previously won the 200 free earlier in the meet. She swam a 1:48.04, touching out Michigan’s Christey Liang (1:48.25). Fulmer built an early lead, flipping 1.02 seconds ahead of Liang at the 100 mark, and was able to hold on to her lead as Liang closed on the back half.

probably looked real nice on that brand-new scoreboard tho

Not exactly looking like the 5th best team in the country!

Big10 depth is going to be weak this year… 54.7 wins the 100 br?? Bence had a stellar summer, but hasn’t shown the goods in scy so far. Freestyle was slow.

Prediction Ohio state will win both B1G 10 champs women and men this year especially with taper coming by then, the men beat Texas and Bama last week. The women are flat out strong! will contend top 5 in nation with relays for sure.

If the swimulator was working, you would see that Indiana men project to a large lead at Big 10 this year.

I wish USA swimming would finally fix their databases so we can use the swimulator again.
﻿

Agreed!!! Women are again dominant! They are set up to 4-peat at B1Gs and have their best NCAA finish. They’ve been extremely strong in the sprints & relays, and that appears to be the same this season! Pasadyn stepping up nicely too. The men will come down to OSU and IU.

Big 10 is “weak” this year because Brendan Burns sent 3 olympians to the spirit realm (Armstrong, Callan and Burdisso)

Hunter Armstrong is way more relevant than Burns will ever be

Long course maybe, when was the last time Armstrong won an NCAA title? Oh, wait he choked over and over again. Burns for the win.

Hey, 6-Man. I bet you are a blast to be around at parties! Armstrong’s made it abundantly clear over and over again that he prefers LCM and isn’t afraid to admit publically that he sometimes struggled in SCY. Comparing SCY to LCM is like comparing apples to oranges Armstrong, Callan and Burdisso are all great athletes, as is Burns. .However, 3 of the 4 of the above mentioned athletes are Olympians.

4
0
Reply
Andrew
Reply to  The doc

I mean people on here care about the NCAA just as much as long course to be fair. But speaking strictly on long course, you are right

Burns did not make any of these guys leave

2
-1
Reply
There is always one!
Reply to  Moana soundtrack

You are exactly right.

I’ll give credit where it’s due, Mich men fought hard