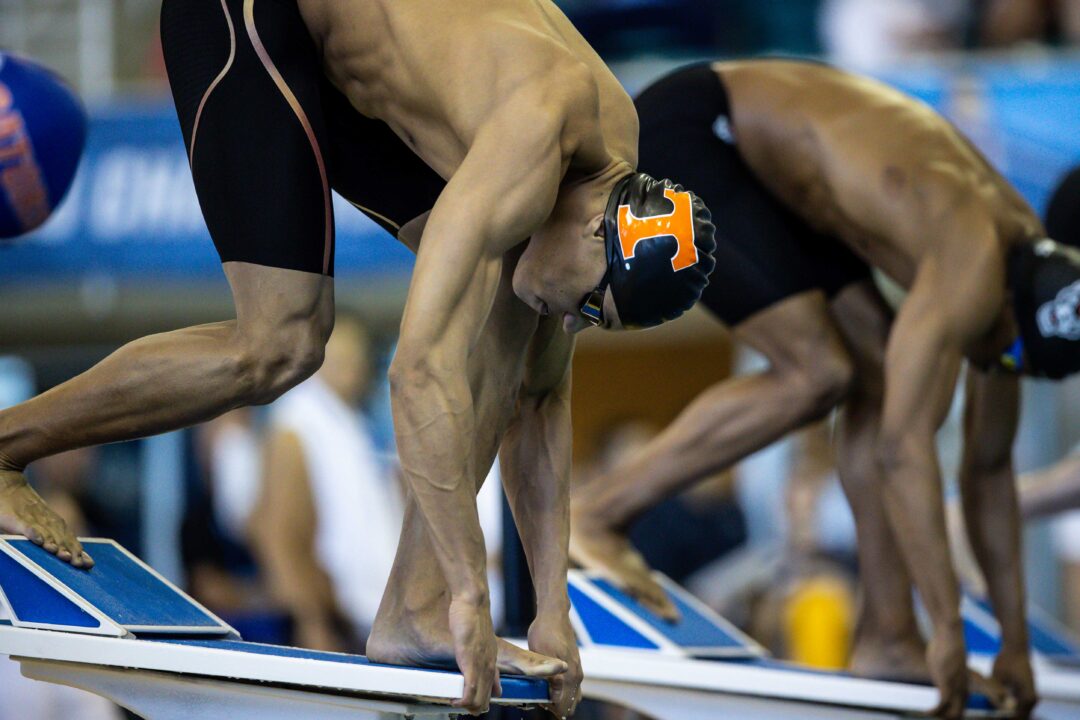 Crooks went a sub-20 split earlier this month on the fly leg of the 200 medley relay. He also picked up two individual wins against Georgia. Archive photo via Jack Spitser/Spitser Photography

Jordan Crooks won a combined seven races last week to help lead the Vols to a pair of wins over No. 11 Georgia and Carson-Newman.

Highlighting the men’s side of the meet was Jordan Crooks. Once again, Crooks swam a sub-20 butterfly split on Tennessee’s 200 medley relay. Crooks swam a 19.92 here which was only 0.05 off his 19.87 split from midseason. Sub-20 50 butterfly splits are hard to come by as only Max McCusker, Youssef Ramadan, and Alex Quach had also done them so far this season as of the beginning of the month.

The relay of Bjoern Kammann, Michael Houlie, Crooks, and Gui Caribe won in a time of 1:24.40. They won the event by over a second and a half.

Crooks also continued to show his consistency as he anchored Tennessee’s winning 400 free relay in a 41.87. The team of Caribe, Kammann, Aleksey Tarasenko, and Crooks touched in a final time of 2:52.57.

In addition to his relay contributions, Crooks also picked up two individual wins on the day. Crooks won the 100 back in a 46.32. That is around what Crooks has swam in the event this month in dual meets.

Crooks’ last win came in the 100 butterfly. Crooks won the event in commanding fashion touching in a 45.71, winning by almost a second and a half. He was 0.29 seconds off what he swam earlier this month in a dual meet against Missouri, but he is still over a second faster than he was this time a year ago in the event.

Gui Caribe also captured two individual wins on top of his two relay wins. Caribe won the 50 free in a 19.30. This was his first time swimming the event since midseason where he swam a 18.91. He also won the 100 free in a 42.80, winning the event by over a second.

Highlighting the women’s side of the meet was Abby Samansky who was the only two-event winner for the Lady Vols. Samansky won the 100 free in a season best of 49.61. That was 0.01 seconds faster than she was at midseason as she swam a 49.62 then. It also was not far off from her personal best of 49.35 which is from November 2019.

Samansky also picked up a win in the 200 free touching in a 1:47.03. That was her fastest time in the event in a dual season this year and less than a second off her time from midseason.

Like McSharry, Josephine Fuller picked up a win and two second place finishes. Fuller won the 200 back in a 1:54.62. That was her fastest time in the event in a dual meet this season and faster than she was at last year’s NCAA Championships in the event. Fuller was second in the 100 back (52.98) and 200 IM (1:59.84). Fuller finished just behind teammate Olivia Harper who won the 100 back in a season best of 52.86.

In addition to their individual wins, Fuller and McSharry were also the first two legs of Tennessee’s winning 200 medley relay. The team also consisted of Emma Carlton and Jasmine Rumley and they swam to a final time of 1:37.68.

After swimming the #1 time in the NCAA so far this season, Kristen Stege picked up a win for Tennessee in the 1000 free swimming a 9:46.49, winning the event by four and a half seconds.

Callie Dickinson also picked up a win for Georgia as she swam a 1:58.84 in the 200 fly. That was almost two seconds faster than she was in the event at this meet a year ago.

Can the swimswam team check to see if results are up on swimcloud before posting college recaps? Way easier to navigate than meet mobile results.
https://www.swimcloud.com/results/259249/

Vols do this every year on Senior Day and it should be expected. No excuses, the Vols are just faster than the few swimmers that are left from Jack.

Most swimmers were not suited

Crazy that Roland Schoeman could walk on right now and have his choice of swimming second, third, or fourth on the 200 MR and make it faster. As good as these guys are, they still have a ways to go.

Dressel would’ve gone like 18.7 but never got the chance

Swimswam, can y’all get an update on Summer Smith? National Team member for Lady Vols that hasn’t swum since the beginning of the season.

By the looks of the livestream, it seems like over 80% of the Lady Vols were suited

Not true. All the big guns weren’t suited. Looks like the SEC bubble swimmers were. Probably battling for those last couple of spots.

Gotta think Mrozinski has a spot. Plus 3-4 divers. Walshe and Smith have spots if they swim.

The majority were probably the ones that couldn’t score since it was a conference meet. Most conferences only allow a certain number of athletes to be scored when facing each other

Why y’all leaving out Dalton Lowe’s 19.9 split from the Jan 6 Mizzou vs Louisville meet

Does anyone know if Wesley Ng, Ian Grum, and Dillon Downing were swimming for the dawgs?

Yes. They all swam.

Based off of results they were all there

Yeah, they swam but all seemed off! UGA didn’t look like a team of winners… “Didn’t care attitudes” — Hopefully they can turn it up for championship season. Not looking good for the Dawgs

most delusional comment i’ve seen on this site today, even with obnoxious Cal fans trying to defend their team’s faulty ideology of swimming fast once a year and getting ran over by an inferior ASU squad in Tempe

Come on, Andrew. Inferior? That’s both a bit dated and a bit … rich. Just enjoy fast swimming without finding a way to insult it.