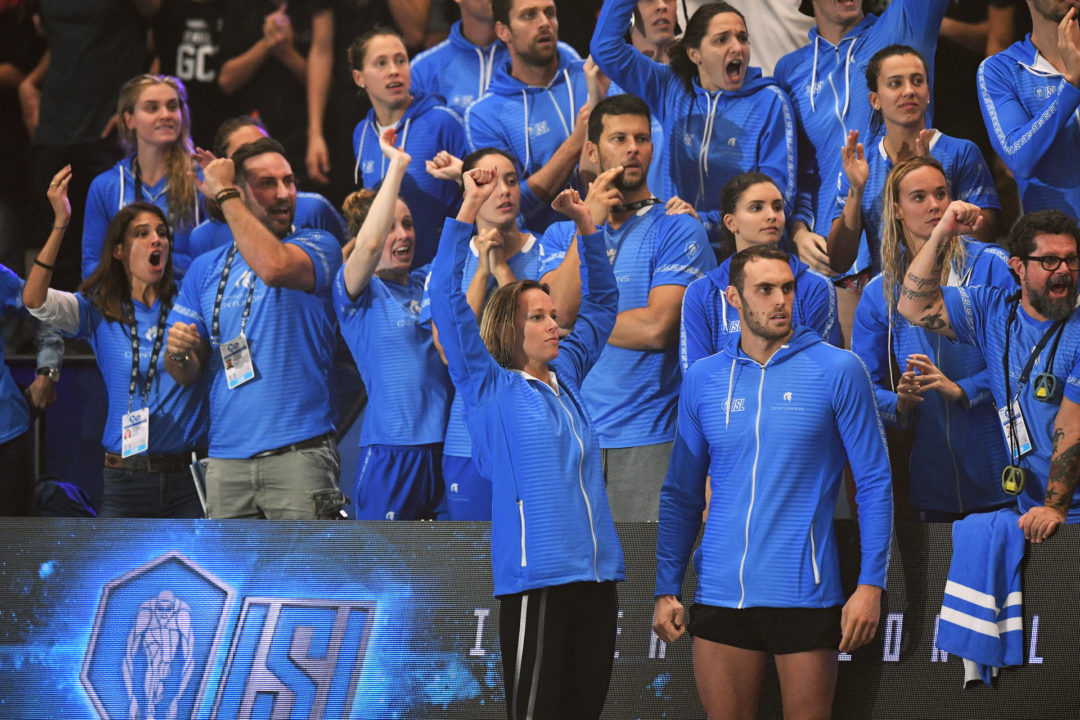 The strength of the Aqua Centurions, their men's squad, got even better this week with the addition of Vladislav Grinev to the team's roster. Stock photo via ALFREDO FALCONE/LaPresse

There is only pride and prize money on the line for the Aqua Centurions at this weekend’s International Swimming League (ISL) European Derby meet in London, and they’ve brought along a new face to help them fight for both.

23-year old Russian sprinter Vladislav Grinev has joined the team for their 2019 season finale after setting a new Russian Record in the 100 free in long course meters this summer.

A swimmer in the prime of his career, and who is very good in both long course and short course, Grinev’s primary contributions will come in the 100 and 200 meter freestyles, though in short course, especially, he can certainly range down to the 50 free, or side-step to the 100 fly.

These are areas where Aqua Centurions have done fairly well, relative to their own results, in the first 2 meets of their ISL season. Brazilian Breno Correia has won the 200 free at both of the team’s meets so far, for example, and in the opener in Indianapolis, Poul Zellmann finished 2nd.

Zellmann remains on this roster for the meet, so Aqua will have some choices to make there.

Aqua, as will many teams, will several swimmers who will be missing in London. Among the other absences are Australians Georgia Bohl and Kaylee McKeown, both Australians, continuing a trend we’ve seen at these derbies (on both sides of the Atlantic) of many Australians not competing. McKeown wound up not competing in any meets this season for Aqua.

A big opportunity for Aqua to make up ground this week is via Spanish swimmer Lidon Munoz, who is coming off a Spanish Championship performance where she set 5 Spanish Records and won 8 gold medals. She struggled for Aqua in the first 2 meets, including only 9.5 MVP points in Naples, but if her racing from last weekend carries over to this week, she could be a top 20 scorer for Aqua.

That would be crucial for team morale, if not standings, because the Aqua women especially have struggled. In Naples, for example, their men scored 195.5 points while their women scored just 110 as they lost to DC Trident by half-a-point. Indianapolis told a similar tale, with 194.5 men’s points and 80 women’s points.

“ Continuing a trend of many Australians not competing “? .???
I’m confused. Lots of swimmers from different nations have not competed at various ISL meets .
And there were lots of comments that London Roar was just too strong with its Australian contingent who won many races . Plus Australians do live 24 hours by plane from London

I am really confused with these two recent reinforcements for team iron and team aqua centurions. These two additions will not change anything in teams chances to swim final meet in Las Vegas. Do management of these teams was just left with extra money that they must spend to the end of the season? Then give it to charity. Or give it to swimmers who are already on the team and got practically nothing to appreciate their loyalty. Or management has special article in their budget called “Pride Expenses”.
I think the explanation is much simpler. The money was funded directly from Grigorishin to make European Derby meet to look less pathetic and more competitive than the one that… Read more »

I should agree. The addition of Grinev does not make a measurable impact on the final outcome team-wise, but it makes the Centurions more competitive so that their 4th place in this Derby is not (or less) granted. It also brings some excitement to the skins, which is the last event that can decide everything, (if anything at all, except prize money, remains to be decided).

I’m excited to see what Grinev will do at this meet.

But, I would disagree that it will impact their team standing. I think they’re finishing 4th regardless.