Chalmers and Belmonte Out, Scott and O’Connor In for London Roar at Euro Derby 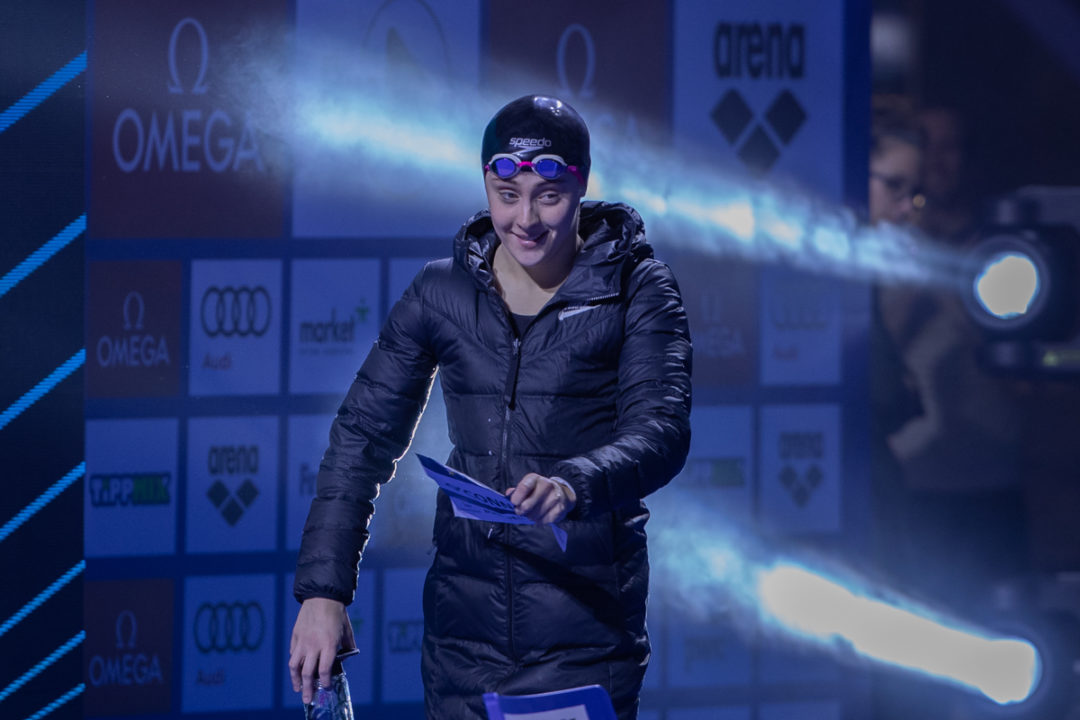 At full form, Siobhan-Marie O'Connor (above) has MVP-caliber range. She and Duncan Scott will reinforce a short-handed London Roar roster this weekend. Archive photo via “Rafael/Domeyko Photography”

The London Roar will be a little short-handed at the European Derby stop of the International Swimming League (ISL) this weekend, though they’re still the favorites to take home the title.

London will host the derby at the London Aquatics Centre that was previously used for the Olympic Games in front of a sold-out crowd. Racing will be held Saturday, November 23rd and Sunday, November 24th starting at 5:00 PM local time (noon U.S. Eastern time).

London will have just 12 men and 11 women on their team for the derby, short of the maximum 14 men and 14 women allowed (including 2 of each gender who are relay-only swimmers). While most of the team’s big stars will be in tow, fewer athletes will put more pressure and allow less flexibility in lineups, especially on the women’s side. Each team has 52 “swims” to fill per gender, meaning that on average, London’s women’s swimmers will have to race almost 5 events each.

Of the team’s 8 missing swimmers for the derby meet, 5 are Australian – which follows a pattern we saw in the U.S. Derby as well, where several Australians are missing. While no reason was given for their absence, this weekend is the Swimming Australia annual awards ceremony.

Among the missing swimmers are the defending Olympic champion in the 100 free Kyle Chalmers, Cam McEvoy, and Elijah Winnington on the men’s side. On the women’s side, the team will be without Australians Jess Hansen and Taylor McKeown. The other missing swimmers are Spanish Olympic champion Mireia Belmonte, who has only raced in one meet for London this season, in Budapest; Britain’s Holly Hibbott; and Brazil’s Bruno Fratus (though Fratus was only ever committed to 1 meet anyway).

Based on MVP scoring (which only gives a 50% multiplier for Skins races and divides relay points equally among all participants), they lose the #2 swimmer from Budapest Chalmers, who was a surprise winner of the skins race there.

There are some big names included on that list of absences, like McEvoy and Belmonte, but on an individual level none were massive contributors in Budapest. It’s the loss of depth, though, that will hurt the Roar: in total, that group combined for 98.5 points in Budapest, where Fratus and Hibbott both didn’t race.

The Roar, however, will also get some reinforcements in the form of the ISL debuts for Duncan Scott and Siobhan-Marie O’Connor. Scott, who at last summer’s World Championships was the individual bronze medalist in the 200 free, should help soften the blow from the loss of Chalmers. At last weekend’s British University & Colleges Championships (BUCS) he showed off his range with 15 races in 48 hours, including a record-setting 200 fly. Long known as a world-class freestyler, Scott has really developed into a well-rounded swimmer over the last year who should contribute mightily in the ISL format.

His butterfly skills should be a boost especially – in Budapest, the Roar had the 8th-place finisher in the 100 fly (James Guy) and 200 fly (Vini Lanza) on the men’s side.

O’Connor likewise adds versatility for the Roar. She’ll soften the blow from the loss of Belmonte, who after a lot of recent health issues really didn’t live up to the potential that she might’ve had in this format earlier in her career. O’Connor is the two-time defending Commonwealth Games champion in the 200 IM, and she was 7th in that event at the 2019 World Championships.

In full form, O’Connor is MVP caliber, though she’s unlikely to challenge for a skins title, which does make MVP an uphill climb.

Between them, the pair holds 14 British National Records, and so if nothing else, they should bring some cheers from the home crowd.

The team will also be boosted by the return of Matthew Wilson to the lineup. Another Australian, Wilson raced in the season-opener in Lewisville before missing the Budapest meet as the debut of Adam Peaty gave the Roar a glut of breaststrokers. In Lewisville, he was 6th in the 100 breast, 4th in the 200 IM, 4th in the 50 breast, and won the 200 breast – his specialty where this summer he tied the long course World Record.

It’s not clear where he fits in to the team at this meet, aside from spelling Peaty from the 200 breast (he was 3rd in that race in Budapest). But, with 3 breaststrokers, that puts even more pressure upon the Roar’s thin lineup, meaning that we’ll likely see at least one of those breaststrokers forced into an unexpected spot this weekend.

Returning for the Roar in London will be, among others, Adam Peaty, the World Record holder who won both the 50 and 100 breaststrokes in Budapest; and Emma McKeon, who has turned into one of the surprises of this series. McKeon ranked 4th in MVP scoring in Budapest and has 6 individual event wins to her credit in 3 meets.

By way of winning each of their first 2 meets, the Roar should, along with Energy Standard, have no problem advancing to the Las Vegas finale in December. All they need to do is not finish last, and they’ve secured a spot in the championship meet. Even if they did, it would have to be last place by a massive margin for them to be eliminated.

Thanks Jeff, didn’t realize the database hadn’t been update yet. Will add those now.

With your swimswam rankings, are people supposed to be on the list twice ? . The men’s short course 400 metre free top 25 list has three double ups I think .

Not sure why Emma McKeon is one of the surprises . She has been very versatile for a few years now.

Yes, she has 17 World Championship medals….not the way to fly under the radar unnoticed!

I know, but since it’s sport and there’s a “winner takes all” mentality, people pay more attention to gold medal haulers in individual events, especially those who dominate the competition. McKeon is vital for the Aussie relays and gets on individual podiums a lot too but she hasn’t gotten an individual gold yet at Worlds/Olympics level and that’s probably partly why she doesn’t get as much of the spotlight as I think she deserves.

Are they the only team who hasn’t been at full strength for a meet yet? They’ve always been missing at least one big name.

That is just an embarrassment of riches.

They also have Duncan Scott and Finlay Knox for that, who both specialize in the 200 IM, so that’s not a thin event for them. It’s nice to have Wilson back but Roar needed 50/100 free swimmers a lot more.

Scott will probably have to pick up Chalmers’ 100 free duties (including relays) and there’s only so many events he can swim.

Yep, I was thinking Wilson in the IM so Scott could do the free and fly

Finlay just hitting stride. Some great work by Todd Melton getting him to this point.

So London Roar lost a lot of sprint depth on the men’s side by losing 4 of the 8 swimmers on the men’s 4×100 free relays. It doesn’t look like they have any strong contenders in the skins either.

On the women’s side, they’re missing a second sprint breaststroker (important for the medley relay) and have a few gaps in the distance free/fly/IM events from Hibbott’s and Belmonte’s absences so it’ll be interesting to see how they fill those.

It’s a testament the strength of Roar’s roster that, despite the multiple big scorers missing, they still look stacked.

I think they’ll still manage a decent A team in the 4×100 free but the B team will be weak. It’s not like their B team at Budapest gained loads of points anyway.

Wonder if they’ll be tempted to use Scott in the skins? He went 21-mid at BUCS last week (split 20-high on a couple of relays too), and he certainly has the endurance for the three rounds.

I think they will, because I don’t see many other options on the roster, but he’ll probably need to improve on his PB if he wants to make it past the first round. It took 21.15 in Budapest to get through.

McKeon may have to swim the 200 fly.
Breaststroke should be ok with SMOC and Vasey in the 50/100 and Pickrem coming in for the 200.

I doubt they’d use McKeon because she’ll most likely be in skins which is the next event. Maybe Marie Wattel for 200 fly?

But they could use both C1 and C2 in the skins

I guess so, but McKeon has been faster than C2 in 50m at every meet so far and has better endurance than both but McKeon probably couldn’t match Kromowidjojo in R3 anyway.

McKeon did way better than C1, who was more than a second behind Kromo in round 3. After that performance, I think McKeon is at least on par with C1 as a skins contender, as long as she can get out of round 1. I doubt C2 has as much endurance as McKeon, and she hasn’t shown as much speed either in these past two meets.

Honestly, McKeon is a great 50m sprinter too, especially after improving in the event this year; she just doesn’t get many international opportunities to do it due to the Campbell sisters squeezing her out of the event.

I totally missed that. 9 seconds over her PB. 😲

Showed some good form at BUCS last week so she might be in better shape to perform in the 200 fly this weekend.

She didn’t swim any faster than the meet she did the bad 200 fly.

I still think McKeon is the better pick for the skins, but the competition at the Euro derby looks stiff, to say the least, and it’s looking like a big ask to make it through the first round, so maybe it would actually be better to put McKeon in the 200 fly. I’d be curious to see how she does in the event, since she’s so good in the 100m fly and 200m free that it makes you think that she should be great in the 200 fly too.