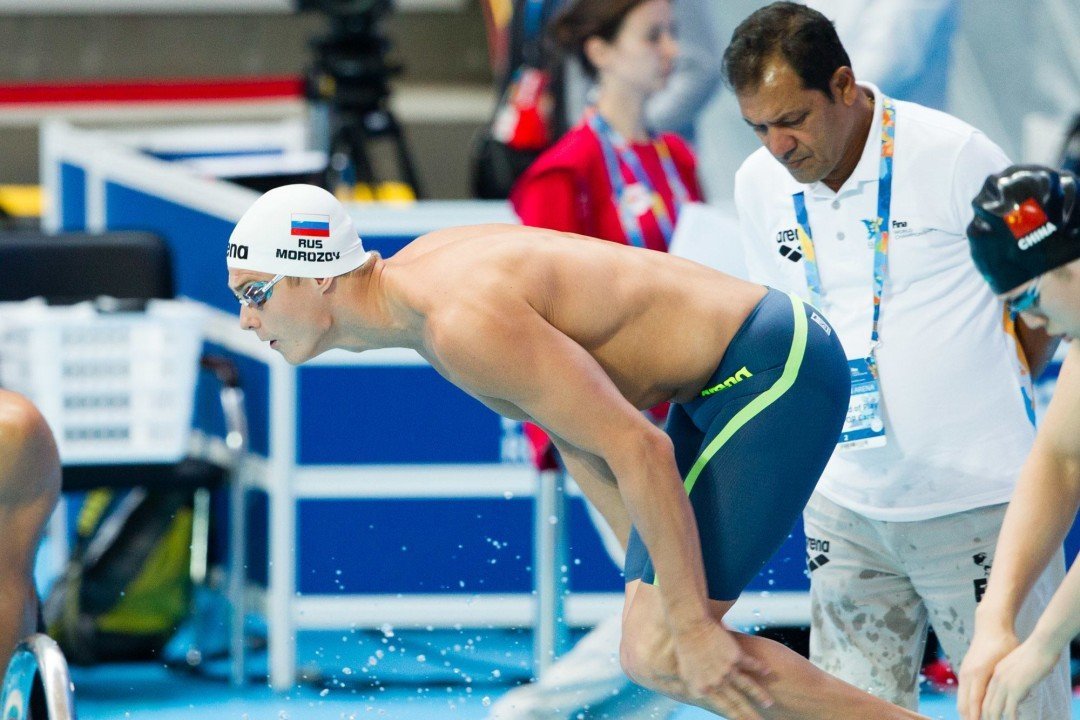 Vladimir Morozov's false start in the semifinal of the men's 100 free will keep him from contending for gold in tomorrow's final. Current photo via Tim Binning/TheSwimPictures.com

Russian swimmer Vladimir Morozov, who was tied for the fastest time in the world this year coming into this championship meet, will be unable to contend for gold in the 100 free after drawing a disqualification for a false start in the semi-finals this evening at the 2015 FINA Aquatic Championships in Kazan, Russia.

Morozov was off the blocks noticeably faster off the blocks than any other swimmer in his heat, and the Universal Sports commentators almost immediately speculated that the only way Morozov could’ve been off that much faster than anyone else was by a false start.  Morozov’s reaction time was a .47, which is almost two-tenths of a second faster than any swimmer in either semifinal.

The early start helped Morozov thunder down the first length of the pool. He touched first in 22.71, which was faster than anyone in either heat besides Nathan Adrian, and he hung on to touch first in 48.12.  That time would have given him the second seed heading into tomorrow’s final, behind Australia’s Cameron McEvoy.

Morozov came into the meet tied with Canadian Santo Condorelli for the fastest time in the world this year, both with a 47.98, and he figured to be a challenger for the gold.  In a somewhat ironic turn of events, Morozov’s disqualification allowed Condorelli to advance to the finals, as he would have been ninth had Morozov’s time stood.

This is a clear case where there was a clearly audible noise in the backgroud, where the starter should have had the athletes stand instead of sounder his own beep. It’s happened to me before at a huge meet, where almost everyone jumped at the initial beep instead of the official and no one got disqualified because it was so obvious. That’s what should have happened here. It’s a shame, being dq’d for something that he can’t really control in front of a home crowd

I can’t hear a second beep in the replay, but Vlad clearly went as if he reacted to a sound. It looks like a split second after he lunges forward, he realizes he was drawn off early and relaxes almost to a stop before he leaves the blocks. It really looks like something triggered his reaction. I don’t think he anticipated. Such a shame in his home country.

Morozov was deceived, before the big beep to start I listen another lower beep, and he jumped according to that beep.
See the images, it is a shame to do such a thing to a athlete…

Yes I noticed that, he was either deceived by something in crowd or the second louder one is just a delay in playback and the initial beep was actually buzzer. Either way he should isn’t in the wrong.

Agree, he was totally moving before the gun. Does it require dual confirmation?

In USA Swimming, it requires dual confirmation by the starter and deck ref. FINA rule book does say anything about it. But this one was so obvious, even at the angle of the broadcast camera. I am sure the starter could see it better.

let’s be hones, all those rumors about Russian swimmers being favored in Kazan were a load of crap

Ahah . And by the lack of whining everything has been going smoothly . What is more , those same laws that caused outrage in Sochi are still in place . Not a peep .

Vlad did a 47.2 later in the mx relay , so didn’t collapse & got on with his responsibilities. Says a lot for the man .

He was clearly moving forward at the horn and should have been DQ’d in this case. However, I’m with Jean’s position, if you’ve ever read his blogs on the college swimming board, that a simple twitch should not be a false start in cases where it doesn’t give an advantage. They call those DQ’s all the time and often in cases where the DQ’d swimmers reaction time ends up slower than the field. A flinch of the shoulders or backwards twitch should never be a false start.

The track rules were changed to reflect the above after Bolt’s flinch at World’s a couple years back and the swimming rules should be changed also.

>A flinch of the shoulders or backwards twitch should never be a false start.

And it is not anymore. Only forward flinch is violation.