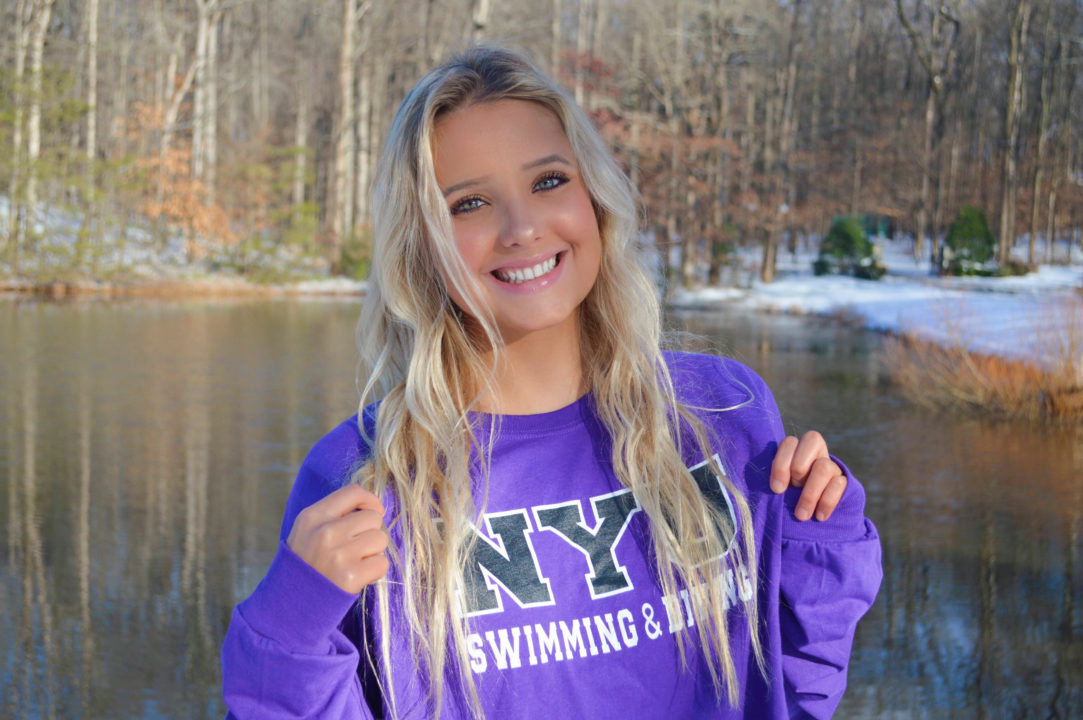 Fitter and Faster Swim Camps is the proud sponsor of SwimSwam’s College Recruiting Channel and all commitment news. For many,... Current photo via Hannah Arndt

NYU has picked up a verbal commitment from fly and IM specialist Hannah Arndt for its class of 2025. Arndt is a senior at The Madeira Scool in McLean, VA, and she swims year-round for the Nation’s Capital Swim Club under the direction of coach Bruce Gemmell.

I am so excited to announce my commitment to further my academic and athletic career at NYU!! Thank you to my coaches, friends, teammates, and family for supporting me along the way. Go Violets!

In February of 2020, the Madeira School junior swam at the Virginia High School Swimming and Diving State Championship. She posted a 100 fly time of 1:00.12, earning a spot in the B-final. She also swam the 200 IM, touching 5th in prelims in a time of 2:14.88. In finals, Arndt dropped 2.47 seconds for a time of 57.65, winning the B-final. She outswam the next competitor by 2.13 seconds. Had she been in the A-final, Arndt would have finished 5th.

She remained 5th in the 200 IM, removing 1.79 seconds from her prelims time. Finally, she swam on her school’s 200 medley and 400 free relays. She swam the butterfly leg of Madeira’s 200 medley relay. The relay which consisted of Molly Watts on back, Sofie Davis on breast, and Niki Chava on free finished 3rd. The same four women swam the 400 free relay, touching fourth in prelims.

The Violets will welcome Arndt in the fall of 2021. Last season, NYU was the 2020 University Athletic Association conference runner-up. NYU senior Honore Collins was the meet’s top point scorer, winning gold medals in the 200 fly, 200 IM, and 400 IM. Arndt’s top times would have placed her in the A-final of the 100 and 200 fly, and the B-final of the 200 and 400 IM.

Arndt’s top times would have made her NYU’s third-fastest swimmer in the both fly events and both IM events during the 2019-2020 season.