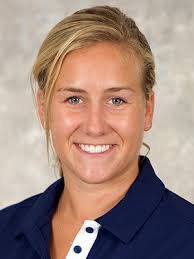 Villanova is adding Laura McGlaughlin to its coaching staff as an assistant. McGlaughlin is a Villanova alumnus who was previously coaching at Penn. Current photo via Villanova

McGlaughlin was a 2013 Villanova grad who was a team captain during her senior year. She worked as an intern for the school’s athletic department and spent two years on staff with head swim coach Rick Simpson.

Since her early Villanova years, McGlaughlin coached for three years as an assistant at Georgetown. She was there through the 2017-2018 season, coaching against Villanova in the Big East. She’s spent the past two seasons as an assistant coach at Penn in the Ivy League.

The full Villanova press release is below:

VILLANOVA, Pa.—A familiar face who has achieved a high level of success as an athlete and in the collegiate coaching ranks is returning to the Villanova swimming & diving program. Head coach Rick Simpson announced this week the hiring of Laura McGlaughlin as an assistant coach to complete the Wildcats staff for the coming year. McGlaughlin is a 2013 graduate of Villanova who previously worked on the team’s coaching staff and administratively in the Office of the Athletic Director. McGlaughlin returns to her alma mater after successful coaching stints at Georgetown and Penn.

“We are excited to welcome Laura back home,” Simpson said. “Being a Villanova graduate, she is keenly aware of our ‘Family and Team First’ philosophy and is herself a product of our program. Laura has a unique understanding of the nuances of being a Wildcats student-athlete generally and a Villanova swimmer specifically. She has a great appreciation for our emphasis on caring for our student-athletes as people first and as athletes second. I am eagerly looking forward to having her back on staff.”

McGlaughlin spent the past two seasons as an assistant coach at Penn, where she worked with swimmers who combined to break 15 school records. She worked with Catherine Buroker, who was a two-time Ivy League champion and became only the second Quakers women’s swimmer to qualify for multiple NCAA Championships. On the men’s side, McGlaughlin helped Mark Andrew earn All-America honors with an eighth place NCAA finish in the 400 IM after he won Ivy League titles in the 200 breast and the 400 IM.

Prior to returning to the Philadelphia area, the native of West Chester, Pa. spent three years as the lead assistant coach at Georgetown and mentored the team’s strokers to unprecedented success. Her final season with the Hoyas was the 2017-18 campaign in which the women’s team was the BIG EAST runner-up to Villanova and the men’s team tallied a third place finish.

Drew Carbone, a freshman on the men’s team, was named the Most Outstanding Men’s Swimmer at the meet after winning conference titles in the 200 back and the 200 IM to go along with a runner-up finish in the 100 back. Molly Fitzpatrick from the women’s team posted an NCAA “B” standard in the 200 breast and was a double winner in the 100 breast and the 200 breast to go along with a sixth place finish in the 200 IM. Georgetown was also selected as a CSCAA Scholar All-America Team each of the three years that McGlaughlin was on staff.

As a Villanova student-athlete, McGlaughlin was a stroke specialty athlete with concentrations in the 100 and 200 breast as well as the 400 IM. She was a team captain as a senior in 2012-13 and concluded her collegiate career with lifetime best performances in the 100 breast (1:02.43) and the 200 breast (2:15.07) at the BIG EAST Championships. She was an eight-time BIG EAST scorer during her collegiate career, including a top-eight finish in the 200 breast as a senior. Her career accomplishments also include being a two-year member of the Student-Athlete Advisory Committee and a four-time selection to the BIG EAST All-Academic Team.

McGlaughlin continued her success on the USA Swimming circuit, swimming in the 2012 Olympic Trials and making appearances at several US Open Championships, USA Nationals and US Pro Series events. She achieved her Olympic Trials standard in the 100 meter breast (1:11.78) during competition at the 2012 US Pro Series Meet in Columbus, Ohio.

Following her graduation from Villanova, McGlaughlin remained on campus and part of Villanova Athletics as an aquatics intern and an intern in the Office of the Athletic Director under former Wildcats athletic director and current BIG EAST Deputy Commissioner Vince Nicastro. McGlaughlin also spent two years on Simpson’s staff in 2013-14 and 2014-15, which marked the first two years in the current string of seven consecutive BIG EAST titles for the Wildcats women’s program. Her responsibilities included serving as the recruiting coordinator for the men’s team and coordinating events for alumni and
fans of Villanova swimming & diving. McGlaughlin also managed the setup and breakdown of meets and special events in addition to supervising the lifeguards at the Villanova Swim Complex.