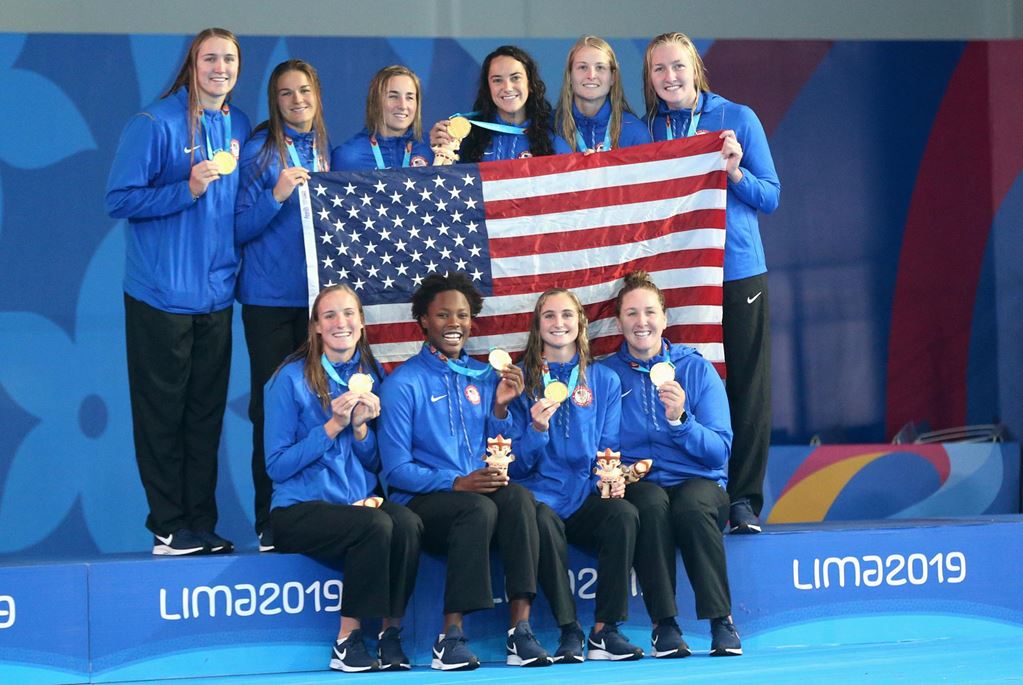 Despite losing Rachel Fattal (Seal Beach, CA/UCLA/SOCAL) and Alys Williams (Huntington Beach, CA/UCLA/Huntington Beach WPF) to illness before the match, Team USA persevered behind six goals from Makenzie Fischer (Laguna Beach, CA/Stanford/SET) alongside four goals each from Maggie Steffens (Danville, CA/Stanford/NYAC) and Stephania Haralabidis (Athens, Greece/USC/NYAC) plus 17 saves from Ashleigh Johnson (Miami, FL/Princeton/NYAC). Paige Hauschild, (Santa Barbara, CA/USC/Santa Barbara 805) who was originally named to the Pan Ams roster but then replaced due to an injury suffered in Gwangju, South Korea, was activated before the match. She replaced Fattal, scoring one goal in over 15 minutes of action.

Team USA finished play in Peru 6-0 outscoring opponents by a margin 142-24. For more on the Pan American Games including schedules and results, click here.

Steffens got things started with a goal in the opening thirty seconds and then added another two minutes later for a 2-0 lead. After Canada scored, Hauschild got her first goal in Lima moments later for 3-1 advantage with 3:52 left in the first period. Melissa Seidemann (Walnut Creek, CA/Stanford/NYAC) and Steffens followed with goals for a 5-1 lead. Haralabidis closed out the period with a score and Team USA took a commanding lead at 6-1 going to the second.

Makenzie Fischer scored on the very first possession of the second quarter and Musselman followed with two of the next three goals for a 9-2 lead with 5:22 left. Ahead 11-3, Jamie Neushul (Isla Vista, CA/Stanford/NYAC) scored her second goal of the period for a 12-3 lead with less than a minute to play. Aria Fischer (Laguna Beach, CA/Stanford/SET) followed moments later with a penalty shot score after a brutality foul on Canada’s Emma Wright. The goal put Team USA up 13-3 at halftime and they would carry a four-minute player advantage into the third quarter.

In the third the United States left no doubt who wear gold as they outscored Canada 10-1. Haralabidis, Musselman and Makenzie Fischer all scored in the first two minutes of the quarter to make it 16-4 in favor of Team USA. Makenzie Fischer scored three of the next four goals for a 20-4 lead with 2:07 to play in the period. Steffens, Haralabidis and Jamie Neushul closed out the quarter with goals for a 23-4 advantage going to the fourth.

In the final quarter the offense went quiet as the United States outscored Canada 1-0. Kiley Neushul scored the lone goal of the period with less than three minutes to play and Team USA was on their way to the top of the podium in Peru with a 24-4 victory. Team USA went 8/11 on power plays and 2/2 on penalties while Canada went 1/6 on powers plays and 1/1 on penalties.