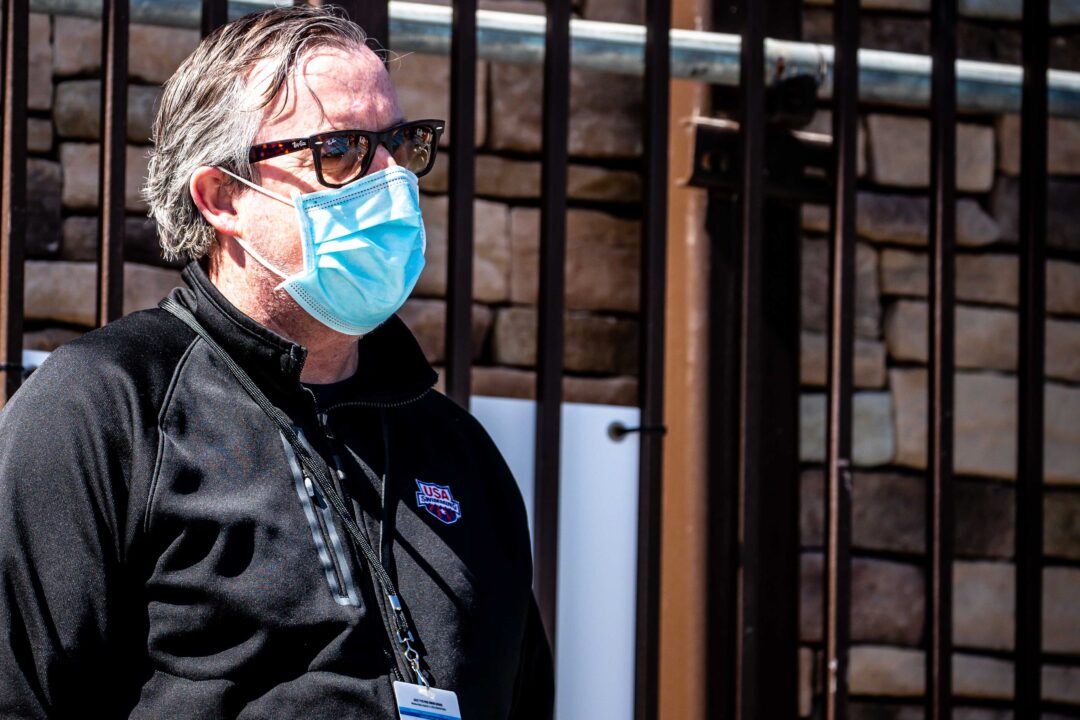 The annual address, which has evolved across time and different executives, is meant to give a sense of where USA Swimming’s leadership feels the sport exists in the United States and where it’s headed in the future.

The 2021 report is title “Pivot to the Future,” and encompasses the sense of Hinchey’s first quad as a reshaping of the way USA Swimming does business: reducing cost, shifting programmatic resources, improving the use of technology in the organization, and dealing with the challenges brought on by the pandemic.

Hinchey says that the pandemic exacerbated a “previously identified concern” about 12 & Under membership in the organization. He cites that USA Swimming is down approximately 60,000 12 & under members since 2019. Given that USA Swimming had about 327,000 year-round athlete members in 2019, that’s a pretty significant number of athletes to be missing.

As with most organizations over the last 18 months, we further recognized the importance of diversifying our revenues and ensuring the financial success of the organization is not principally based on the size of its membership. Most importantly, higher revenues will equate to increased resources
for membership. To accomplish this, our Commercial team is targeting an aggressive partnership sales strategy coupled with the further commercialization of our events and Olympic Trials, and the development of an eCommerce & retail platform. Additionally, the new Foundation fundraising board of directors is striving to bring in more gifts and donations to support the development of programs or member needs, as they did with their $3M COVID-19 Relief Program Grants to clubs during the pandemic.

USA Swimming has long been highly dependent on membership numbers for revenue, which highlights the sometimes-uncomfortable duality of the organization as both the group that oversees programming for hundreds of thousands of age groupers as well as the group striving to maximize Olympic results. In the 2020 budget, for example, membership revenue was projected at just under $24 million out of a total revenue projection of almost $45 million. That’s about 53% of the organization’s revenue coming from memberships.

By comparison, only $5.3 million of projected revenue in 2020 was allocated to come from sponsorships.

Conversely, of the organization’s projected technical/sport spending budget, about half ($11 million out of $22 million) for the same year was budgeted for the National Team Division.

Expenses for postponement of the Olympic Trials

We are not passive in our projections, but rather continue to reprioritize programmatic member resources and services to ensure we are aligned with, and supporting, our stakeholders.

A perfect example of this is the 2020 U.S. Olympic Team Trials – Swimming. Following the postponement of the Olympic Trials in 2020, we immediately pivoted to determining the best way to host the event in 2021. In doing so, we were guided by two key principles: keeping our promise to select the best Olympic team and keeping our promise to the athletes who had already worked hard to qualify throughout the Quad. The event is, and should always be, focused on the athletes.

As you know, we decided to host two separate waves, in order to prioritize the health and safety of the competitors and everyone supporting the meet. Extensive COVID-19 mitigation measures were enacted, not only to keep all attendees healthy but to
safely sendoff 53 athletes to camp and the Olympic Games. In consultation and coordination with our medical staff, spectators in the venue were limited to 50% capacity, a drastic change from years past. While Trials has traditionally always been a revenue
generator, in 2021, after all was said and done, it was a 7-figure investment and loss for the organization, but worth every dollar.

USA Swimming’s financials for 2021 aren’t out yet, but this report reveals that among the other major financial hits from the pandemic, they lost over $1 million as a result of the reimagination of the Olympic Trials.

In 2016, the organization reported $5.2 million in revenue for the Olympic Trials.

One of the largest financial increases we have seen over the last few years is the cost of insurance coverage. As you know, USA Swimming provides insurance for its members, volunteers and clubs as a benefit of membership. The breadth of coverage is more robust than most other options available to individuals or smaller organizations. Claims processed throughout the last Quad, as well as changes reflected in the youth sports landscape, have placed an ever-increasing burden on the organization.

We will continue to tackle this head on with the further development and implementation of our Safe Sport program, which celebrated its 10-year anniversary in 2020, and working more closely with our clubs on education and mitigation of operational risks to reduce the number of general liability claims.

In this passage, Hinchey acknowledges the growing financial impact of insurance on youth sports organizations amid a rising number of abuse scandals that have gone beyond “incidental” and into the realm of “institutional.” Most famously, the recent Larry Nasser case. USA Gymnastics reached a $425 million settlement agreement with his victims, while Michigan State reached a $500 million settlement agreement – meaning a total of almost a billion dollars of settlements in that case alone.

$425 million represents almost 10 years of revenue for USA Swimming, which has had its own long-running issues with abusive coaches that includes a new lawsuit filed today by a victim of former swim coach Andy King.

We may never be able to totally root abuse from youth sports, but organizations like USA Gymnastics and USA Swimming have to do a better job of rooting out, and not protecting, abusers than they have in the past. That is primarily an issue of humanity and morality, but where those concerns of humanity and morality have failed to ignite change in the past, the financial strains have added a financial imperative to the propulsion as well.

This is somewhat of an ominous report. The insurance issue really concerns me. The days of the USA Swimming Executives and board running a massive insurance fraud on the unsuspecting USA membership, not paying claims and taking “kickbacks” from their own Barbados offshore insurance company are over. Compound that with the executive’s and board’s tragic mishandling of sexual abuse claims, the countless lawsuits, attorney fees and the ongoing coverup of abusers, is it any wonder that affordable insurance coverage is now hard to find? And this is not USA Gymnastics/Larry Nasser’s fault. The USA Swimming board and executive actions are just as egregious even though it wasn’t given as much press as gymnastics. The party is over and the money… Read more »

He is sitting in his ivory tower right now. I’d like to know how many lawsuits are currently pending and what the estimated loss will be. I’d like to know exactly how much the loss on the Olympic trials event is ….it was expected to be $5m profit and now it’s a several million dollar loss. They also hide most recent financial data by showing avg annual revenue during the quad. Pretty useless data if you are trying to figure out how the organization is doing financially. He is including 2017 and 2018 data in those number while at the same time admitting they have a massive reduction in membership. Whatever the state is Hinchey has to own it now… Read more »

One more to add. I’m tired of organizations and businesses and people in general hiding behind Covid-19 and using it as an excuses as if they are somehow different then the rest of us. We ALL are having to deal with this BS every day.