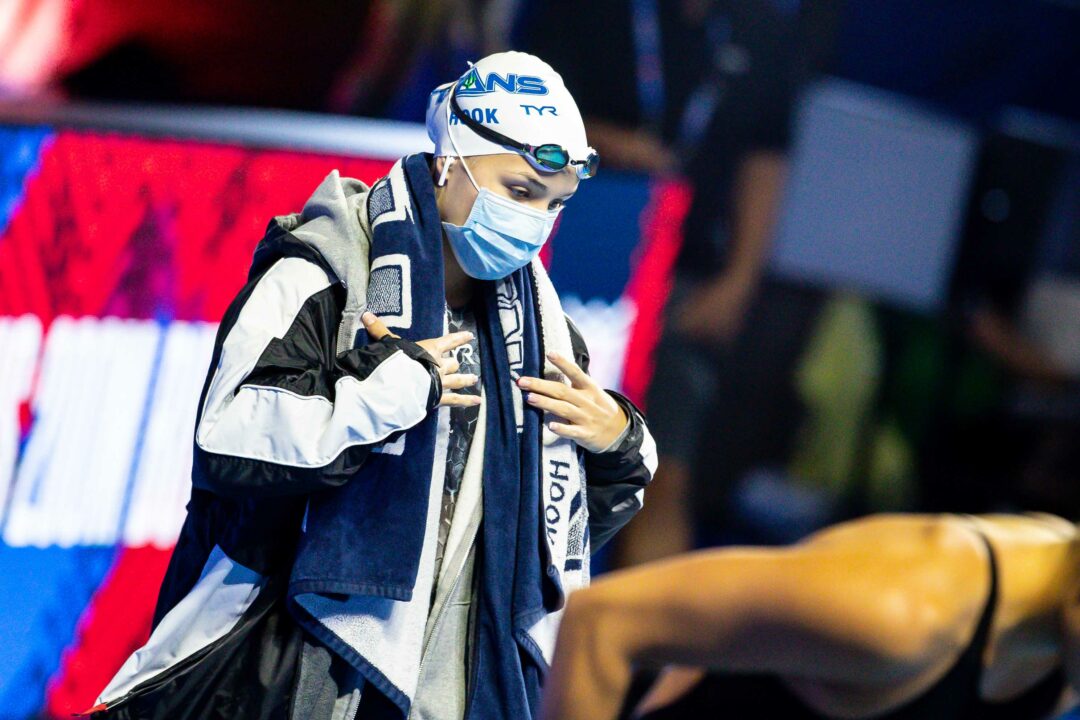 Hook was third in the event at US International Team Trials as she swam a 2:08.80. Her best stands at a 2:07.87 from summer 2019. Archive photo via Jack Spitser/Spitser Photography

Highlighting night 1 of Futures in Cary was 2022 Stanford commit Charlotte Hook of TAC Titans. Hook won the women’s 200 butterfly in a 2:09.26. Hook holds a best time of 2:07.87 in the event which she swam back at 2019 Summer Nationals. Her best time so far this year has been a 2:08.80 which she swam to finish third at US International Team Trials in April, finishing less than a second off making the US 2022 Worlds team.

Finishing behind Hook was Hannah Bellard who swam a 2:10.76. Bellard holds a best time of 2:10.40 which she swam at last summer’s Futures in Huntsville. Bellard also picked up a win of her own, winning the women’s 800 free in a 8:40.74. Bellard won the event by over 18 seconds. Bellard was just off her best time of 8:38.84, also from Huntsville last summer. Bellard completed the tough double of both the 800 free and 200 fly at night.

Winning the men’s 200 free was Michael Cotter of TAC Titans. Cotter swam a 1:47.46 which was a personal best time as his previous best stood at a 1:48.45 which he swam to finish 13th in prelims at US International Team Trials. Cotter is committed to NC State for fall 2022.

Currently swimming for Michigan earning a win was Jack Callan, younger brother of 2020 Tokyo Olympian Pat Callan. Jack won the men’s 1500 free in a 15:41.68, winning the event by over 18 seconds. That was a best time for Jack as his previous best stood at a 15:45.84 which he swam earlier this month.

In the women’s 200 free, Michaela Mattes of Sarasota Sharks captured the win in a 1:59.64 finishing just ahead of teammate Addison Sauickie who touched in a 1:59.88. They were the only swimmers under the 2:01 mark. That was Mattes’ first time under the 2:00 mark as her previous best stood at a 2:00.51 which she swam to finish 19th at US International Team Trials. Mattes is committed to Florida for 2023. Sauickie was just off her best time of 1:59.45.

In the women’s 100 breast, Jennah Fadely or Marlins of Raleigh swam a 1:10.61 finishing just ahead of Elizabeth Isakson of Chattahoochee Gold who swam a 1:10.79. Fadely is a rising sophomore at Divison III powerhouse Kenyon College. At the 2022 NCAA Division III Championships, Fadely swam a 1:00.75 to finish third. Isakson is committed to Georgia to fall 2022.

Charlotte is a trooper. She has been through so much after getting 3rd at both trials. She has preserved through the hardest part of this sport. I see good things coming for her.

These times could end up winning juniors. Fast kids at futures!

How it should be.. same with sectional meets

Limiting sectionals would be bad cuz it limits racing options.

Not lifting just making it to where if you have national times you can’t attend sectionals..

So you have to spend $3000 to go to Nationals and get a prelim only swim? No thank you.

Not everyone has the resources or time to fly across the country and stay in a hotel for a week. It is not free and USA Swimming doesn’t pay for everyone. I understand what you’re saying but your proposal is limiting and would result in excluding many people from meet opportunities.

Charlotte is on the National team.

I don’t understand why Futures isn’t 18 and under. Sectionals are available for all ages. I thought of Futures as a step up for developing swimmers before Juniors.
I agree that not allowing faster kids to swim at Futures and Juniors limits those swimmers who can’t afford to travel. Additionally, for some clubs, if you have two swimmers who have only qualified for Juniors and one swimmer qualified for Seniors, it makes sense to have all of them swim at Juniors (as long as the swimmers are ok with it), so you don’t have a coach traveling and away from the team for 2 weeks.