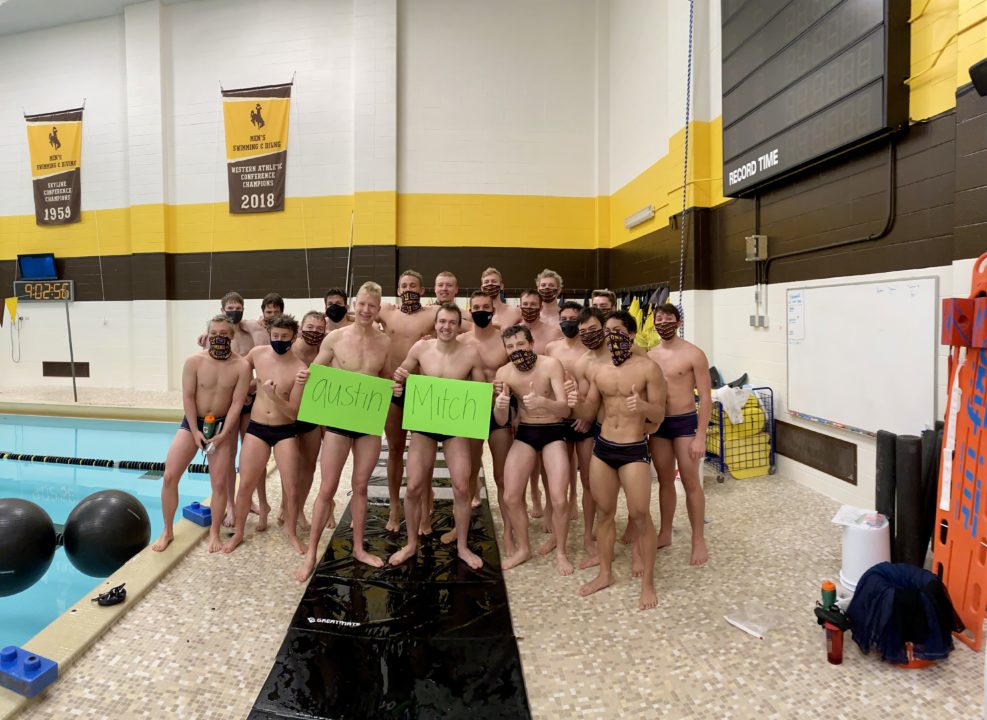 Honoring the school's graduating class, the University of Wyoming held a practice dedicated to the seniors, ending with a homemade slip and slide.

The University of Wyoming, with no home meets at which to hold a more traditional senior night, decided to honor the program’s graduating seniors with a practice dedicated to them.

The practice began with the senior members of the team taking the role of their coaches, writing the practice for the rest of their team. The practice featured a warmup swim snaking back and forth down the lanes, the color game, and Bob Ross relays. The team then finished its practice by creating a slip and slide tunnel for the seniors, as well as giving them cards signed by their entire team.

The current Wyoming seniors have been a key part of the team’s success during their first three years as members of the team. As freshmen, the men helped the team to it’s first conference title since 1959, claiming the top spot at the Western Athletic Conference Swimming and Diving Championships.

Last season Hannah Mclean-Leonard broke the school record in the 100 fly, finishing in 52.70. Also setting a school record was Katelyn Blattner in the 500 free. Blattner was a conference champion in both the 200 and 500 freestyles at the 2020 Mountain West Championships. On the men’s side, Mitchel Hovis qualified for the Olympic Trials in both the 100 and 200 breaststrokes.

While the school isn’t holding any meets at home this season, they are still traveling to compete. The team competed in four meets in early December and has another six dual meets slated for January. The Mountain West Championships are scheduled to begin on February 18th.

Conference champion and school record holder, Katelyn Blattner, is also a senior captain that should have been mentioned.

This is great and looks like a lot of fun! Best wishes to all the Wyoming Cowboys swimmers and divers, especially the seniors.