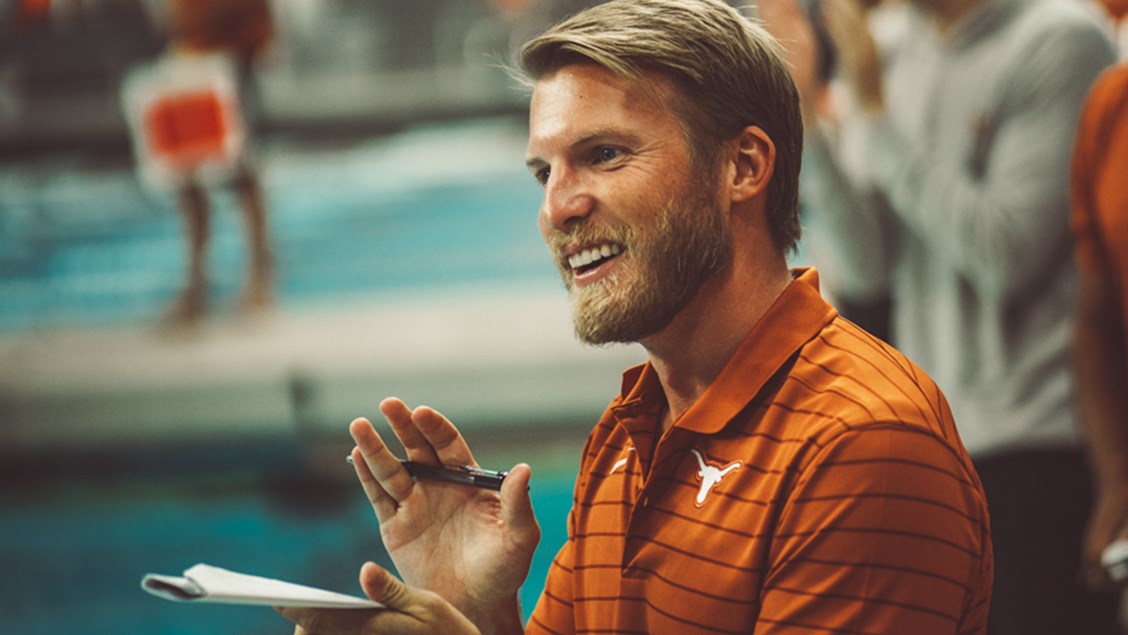 Collins has been a part of the Texas coaching staff for 8 seasons and 5 NCAA titles, and now will carry an associate head coach title for the.... Archive photo via Texas Athletics

The University of Texas has promoted assistant coach Wyatt Collins to associate head coach of the men’s swimming & diving team.

While these frequent announcements of promotions to assistant or associate head coach are usually administrative changes to recognize an extra layer of responsibility from a normal assistant or to justify a pay raise, Collins’ promotion fits into a larger narrative of the succession plan for the Texas Longhorns.

Texas head swim coach Eddie Reese turned 80 in July. Earlier in the year, he announced his retirement as the most decorated Division I collegiate swimming coach in history. His teams have won 15 national championships at Texas in his 43 seasons, and 42 consecutive conference titles as well. The Longhorns seem well on their way to adding another to each of those columns.

Not long after, though, and just a few weeks before his 80th birthday, Reese un-retired, announcing that he would come back for another season leading the Longhorns.

Regardless of the reasons for why that happened, which will probably never be discussed publicly with full transparency, the hottest topic in college swimming is who will succeed Reese at the helm of the nation’s pre-eminent swimming powerhouse.

Will the Longhorns bring in a head coach from another top program, for whom this might be the only rung left to climb on the proverbial ladder?

Or will the Longhorns promote their young assistant Wyatt Collins, who has been with the team since 2014 in his only collegiate coaching experience?

“Wyatt is an exceptional person and that makes him an exceptional coach,” Reese said. “His knowledge of the sport is, for somebody his age, amazing. He loves it. He has great connection with the student-athletes and is really good at reading body language. Wyatt gets along great with the recruits and knows how to connect with them, so we get a lot of great talent that way.”

Collins swam for 2 seasons at Boston University before transferring and competing for Texas for one season in 2011-2012. He graduated from Texas in 2013, and after starting his career as an age group coach at the USA Swimming club Nitro Swimming, he joined Texas as a volunteer assistant for the 2013-2014 season.

After long-time Eddie Reese assistant Kris Kubik retired in 2016 (the two had spent 34 years together), Collins was promoted to full-time assistant, and has been with the Longhorns ever since. He has been a part of the last 5 NCAA Championship teams for Texas, as well as two runner-up finishes.

Collins is young, though by all accounts in and around the Texas program capable, and his age alone would be a dramatic shift for the Longhorns from Reese. Can we read between the lines of this promotion that it is a sign of confidence that he’s ready to take over the program? If not, it will certainly impress any outside athletic directors who might want to hire him away at the end of the season to lead a program of his own.

Because Reese and Kubik worked together for so long, the one thing that Reese really doesn’t have on his resume is a long coaching tree like some of the other great college coaches do, ala David Marsh or Frank Busch. If Collins were to take over the program and have success, that would serve to check one final box on the list of accomplishments by Reese that really are unparalleled in modern American swimming.

Texas knows what they are doing here & in Eddie we trust.

We all know Texas is basically a swimming school (with a football team) now.

Good on you Wyatt Collins, Horns Up.

My theory is, he grew that bad boy out to look a little older and established to trick the AD’s

Wyatt is deserving of everything that comes his way. His professionalism and pursuit of excellence is second to none. Way to go!

Congrats Wyatt! Well deserved and the right move by all of the powers that be.

Basically just another way to get their assistant coaches a higher salary.

I’ve never understood why people think Wyatt is in any way deserving to take over as head coach after Eddie. He has not proven anything yet other than riding off Eddie’s coat tail. He may very well be a nice guy with good rapport with the swimmers, and obviously has a great mentor, but there are other proven coaches with more experience out there. TX should not be a job for a first time HC in my opinion. Just because Wyatt worked for Eddie does not mean he has the skills to take over this program. Despite the promotion, the AD had realized Wyatt is not ready (or not the right person) for the job. Can’t imagine another year with… Read more »

I think a lot of people would agree with you resume wise that Collins appears a little green to take over Texas. However, what Collins has over anyone else is the Eddie Reese stamp of approval, which certainly carries significant weight in the Texas athletic department. Beyond Eddie’s approval, Wyatt becoming head coach also offers some stability and consistency to an incredibly successful program, which may be preferred to rocking out the boat with an outside coach. My own internal hypothesis is that Eddie unretired because the AD didn’t feel like they could hire Wyatt without a bit more experience.

I think the at you are correct

Yep. All of this. Again, based on Eddie’s public comments on the Brett Hawke podcast — it sounds like he’s gotten his health/mobility issues under much better control now — and my guess is he’ll stick around 1-2 more seasons beyond this, but it will be Wyatt running the day-to-day operations more and more. And even after he officially retires, I have to expect Eddie will be making frequent visits until the day he passes away. **And that’s another reason why bringing in an outside HC would be awkward. For anyone else, they would want to create their own team identity and not have Eddie looking over their shoulder – but they also wouldn’t want to be rude to the… Read more »

Dave Durden had slightly more experience than Wyatt when he took over Berkeley. People howled, yowled and soiled their towels mostly about things you speak of. Seems like things worked out just fine. Swimming has a major issue hiring dinosaurs (one of the many reasons that we lack so many female HC’s in our sport). Let’s get some new blood in the game. I can assure you that previous HC experience in the NCAA doesn’t mean much of anything, and may be more of a liability.

The difference is that Dave D had head coaching experience and had more coaching experience (w other teams and in terms of total years) than Wyatt. Dave was also solely responsible for many of Auburn’s sprinters while under Marsh and had proven success. Having Head Coaching experience (or some time of managerial/supervisory experience) is vital for these positions. Wyatt was a volunteer for a few years and an asst for 3? Hardly enough to sustain the legacy of Eddie.
If the AD was so interested in Eddie’s opinion, Wyatt would already have the job.

Not to be ugly, but a HC job for a team that didn’t win a conference meet in the two years he was there and was canned 3 years after he left doesn’t really count for much. Don’t get me wrong, I have the highest respect for DD, but don’t sell me that he has more experience. He coached at Auburn for 3-4 years before Maryland. So that’s 6 years at best before landing one of the premier positions in NCAA swimming. Wyatt has been with the GOAT for 8 years. I don’t know him…is he a good fit? Not for me to say, but experience is not his problem.

By all means, would sure seem like the Texas AD has a strong hiring background. Things seem to be going so well in football with Sark.

I don’t think you totally understand the importance of maintaining a swimming culture. Wyatt understands how the program works at Texas and if you brought in a different head coach from another university it would be a whole different program top to bottom.

SwimSwamSwum has it right. Wyatt has the full support of Eddie Reese and that is huge to the athletic director. Wyatt is well liked by the swimmers and is an integral part of the management/recruiting for the team. Hiring Wyatt, with Eddie continuing in some capacity, is an ideal transition from the athletic director’s perspective. Maintaining the culture that Eddie has created at Texas is a major key to Texas’ future success and no one understands the culture like Wyatt does. I think when Eddie “retires” he’ll want to keep coaching workouts and that only works if Wyatt is the HC.

Eddie has a track record of being kind of good at recognizing talent, even when others don’t. I’m not certain, but I’d imagine Eddie is more well-equipped to recognize if Wyatt is ready than the swimswam comment section