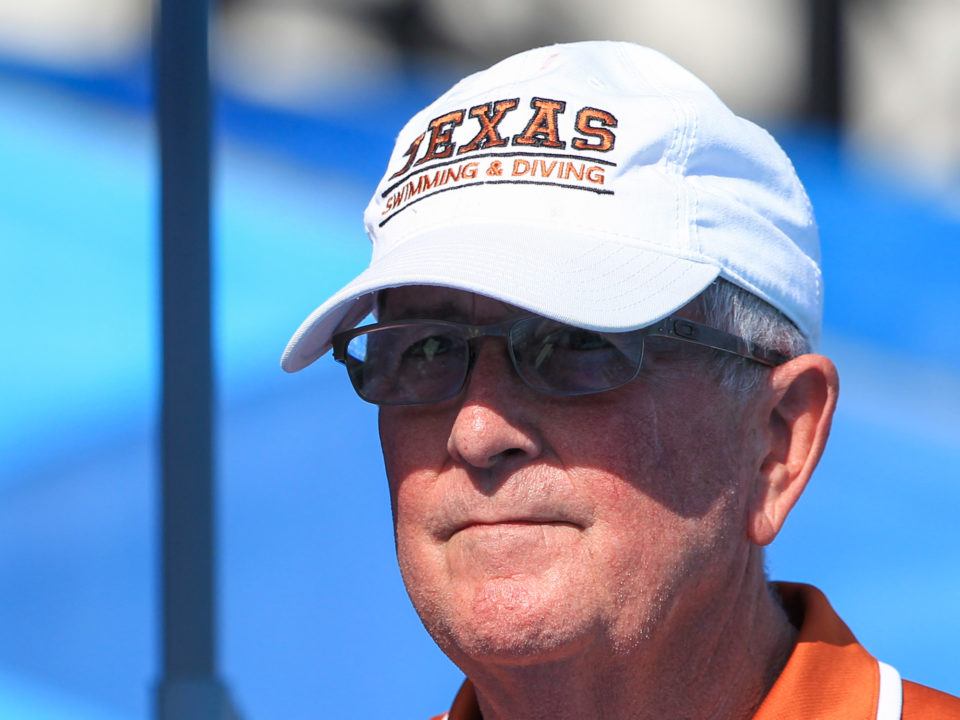 Swim coaching legend Eddie Reese announced his retirement this spring. But University of Texas officials are suggesting things might not be so final. Archive photo via Tim Binning/TheSwimPictures.com

College swim coaching legend Eddie Reese announced his retirement this spring. But University of Texas officials are suggesting things might not be as final as originally announced.

Update: Reese himself has confirmed that he will not be retiring in a statement: “There’s more that I want to do for this current team,” Reese said. “We have a great group of guys in our program. They have a great future in the sport, and I want to help them see how good they can be.”

University of Texas President Jay Hartzell and Vice President/Athletics Director Chris del Conte went back and forth on Twitter this morning, suggesting that Reese had rescinded his retirement paperwork and would be returning to coach the college team again in 2021-2022.

The full exchange is below. Del Conte first announces that he’d received Reese’s retirement paperwork, tagging Hartzell. The school president responds, seemingly joking that he’ll be rejecting Reese’s retirement application. But the two continue the back-and-forth and seem to confirm that Reese is indeed reversing course and remaining in the college coaching ranks into next season.

I'm rejecting this application for retirement.

I think Coach Reese has a 16th national title left in the tank – at the very least!

Just to confirm, then, @_delconte: We all agree that Coach Reese is coming back to go for #16?

Yes sir! At your request Eddie has rescinded is paper work and is on deck with @TexasMSD as we speak.. Good work my friend 🌍🤘🏽 https://t.co/AGY5jMrCsK

We’ve reached out to the school for confirmation. A representative of the athletic department said they hadn’t heard anything about Reese’s status beyond the tweets from the school officials. A representative of the Longhorn swim & dive program deferred to the athletic department. The most clarifying response we’ve gotten was a two-word tweet reply from Del Conte suggesting that nothing would change with the current structure of the swim/dive coaching staff, with Reese as head coach, Wyatt Collins as assistant coach, and Matt Scoggin as diving coach:

Reese’s original plans were to retire after this summer’s Tokyo Olympics, but remain connected to the program as a coach emeritus. Reese is one of the most successful college coaches in history, winning 15 NCAA team titles over his 43-year coaching career in Austin. He led national title-winning teams in five different decades: the 1980s, 1990s, 2000s, 2010s, and as of this spring, the 2020s. His Longhorns won the 2021 NCAA title, Reese’s 15th.

Most recently Reese helped three swimmers to the U.S. Olympic team. Townley Haas is a Texas alum still training with Reese, and made his second Olympics as a 200 freestyler. Drew Kibler is a rising senior for the Longhorns and also made the 4×200 free relay. And Gunnar Bentz is a Georgia grad and returning Olympian who now trains with Reese out of Austin.

What madness is this? That conversation sounds completely canned. Why do this in public?

Agreed. I cant tell if the discussion is a joke?

Lol… I mean on one hand, I was pretty excited for a new chapter in Texas history, but can you really be upset with Eddie coming back!?

Yes. It’s time to get someone new integrated into the head coaching role. Eddie is too old at this point I’m sorry. If he wants to be involved give him an honorary role.

You clearly don’t know how great he is as a person and with his swimmers.

Yup. He just won yet another national title while making his guys swim faster than they ever have before. Sounds washed up and too old to me.

You so boldly state that he “is too old at this point”. Well, you don’t give enough due credit to his fantastic creative coaching abilities, people skills, relationships – to build future Longhorn teams through recruiting, and confidence he brings to those Texas athletes during tight competitive moments… As a great coach friend of mine has said repeatedly, “CONFIDENCE IS A SWIMMER’S SINGLE GREATEST WEAPON IN COMPETITION”. 16 for Eddie!
Sooooooo many amazing accomplishments have been realized by both teams & individuals which were led by “old” coaches / managers. This spans the full world of sports.

Too old? too old for what? winning. wait he did that. again.

A lot of people Eddie’s age only know one thing – how to work….I’m sure the ‘thought’ of having all the free time in the world is great, but it doesn’t take long for people like that to ‘get bored’. There’s only so much fishing you can do, golf you can play, sleeping in you can sleep before you realize that you’d rather be back on the pool deck. If the wife says, “Give em one more year!”, you listen and go back!

He was never going to fully retire. He was going be at practice everyday but just didn’t want to do the swim meets and travel anymore so Wyatt was supposed to transition into the official Head Coach position

I’m all for Eddie staying on and for people who really love their work. My comment is not directed to him, but to people who have this idea that work is the only thing that can provide them meaning and that they’ll get bored without it. I cannot fathom boredom and have zero patience for people who say they are bored; those folks suffer from a lack of imagination, a lack of simply opening their eyes to the myriad ways they can spend their time.

I’d like to think the swim community is better than that. “Dragging” people should be left for the cesspool that is Twitter.

Cmon man some slander ain’t hurt no one

Bet you were really fun in highschool and college 🥴🥴

6
-19
Reply
dresselgoat
Reply to  That guy

You spent your time in school trying to ruin people on the internet? Actually that sounds right

*queue the black panther meme* “we don’t do that here”

Coach Eddie Reese is sterling. And his brother Randy is no slouch, either…

Whatever Eddie does, it’s a-f***in’ okay with me. Cheers, Eddie. I talked with you two times; once in Daytona Beach after you finished a handball game and came over to Welch Pool to talk with John Hossfield, and then once more at the 1973 SEC Championships, when I was swimming for LSU. You were, and still are, one of my swimming idols. I hope that you’re a multi-millionaire and happy. You deserve it all, you glorious b***ard….

UT will make it work for Eddie to remain on deck & hands on to the extent he would like to be. It can go well. It did with Nort at Cal, it did with Urbs at Michigan. I think the salient point is there comes a time when you just need to separate from the administrative burdens…recruiting, travel budgets, dealing with ADs & other administrators. That’s a lot of bandwidth. If Eddie wants to be on deck for practices & at meets, everyone wins.

True, but in both of those examples, another head coach was brought in and given that title and control. Nort and Urbanchek were given “emeritus” titles, but it wasn’t truly their program anymore.

In this case…Eddie is maintaining the full title, control, responsibilities that go with that. They’re not bringing in another head coach. Per the AD’s response Tweet, it’s business as usual.

This is great! I hope Eddie returns. After all, the Lord God, himself, could replace Eddie as head coach and there would still be a big drop off in performance.

Their only hope would have been Coach Ray Looze! (Did I do that right?)

Haha! Am I that predictable?

curious how this went down…

#1: Eddie changed his mind? He has certainly earned the right to finish on his own terms, and hats off to the administration… wonder if there is a “succession plan” that was proposed place as part of the return.

#2: Admin asked him to come back? Hats off to admin knowing what they had, and begged him to return, and to Eddie for agreeing… (coaching search didn’t go as planned?)

either way, the swimming community is still a better place to be with Eddie still on the deck.

There are lots of rumors about how it went down. All sort of align, but none perfectly align. Most are more like #1. The differing stories are what motivated Eddie to change his mind…

Feels like #1 with a side of the AD not fully signing off on the desired succession plan?

I think we can assume it was amicable and that no “threats” were made in either direction. Probably not really much of a story here. Olympic obligations and COVID restrictions maybe just made things too complicated to have a seamless change-over…

@Braden Keith spill the tea, what are the rumors about what caused him to change his mind?

I would lean more towards #2 than #1. I’m sure Eddie got something he wanted from the deal.

Now it’s been clearly communicated and resolved that UT has a year to find a new coach.