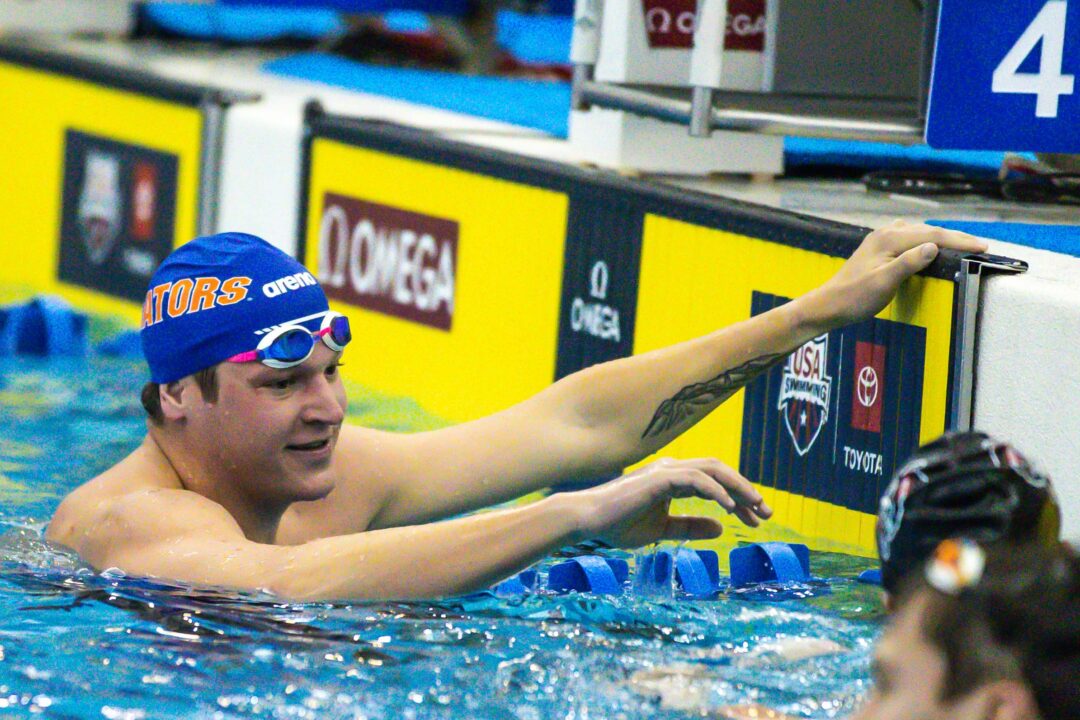 Trey Freeman (pictured) won the men's 1650 free at the SEC Championships, in a race where the Florida men took 7 out of the top 9 spots. Archive photo via Jack Spitser/Spitser Photography

The University of Florida men took seven out of the nine top spots in the 1650 free at SEC Championships on Saturday, showing just how deep their distance squad is even without their biggest stars.

Despite not having defending NCAA champion and US Open record holder Bobby Finke, who is out under COVID-19 protocols, the Florida men still scored 173 out of 362 available points in the event–more than all of the other times combined. The only non-Florida swimmers mixed within the Gators as the top placers were Georgia’s Jake Magahey and Auburn’s Michael Bonson, who finished second and fourth respectively.

In addition to being dominant in distance, the Gator men also share a common trait of closing ridiculously fast. We all know that Finke is notorious for blowing everyone away in his final 50, but he doesn’t seem to be the only Florida man doing so. In this 1650 in particular, Florida’s Trey Freeman closed the race in a 23.9 on his final 50, running down Magahey and teammate Tyler Watson after being in third behind them at the 1600-yard mark.

Freeman edged out Magahey by fourth-tenths to win the race, after being a whole second behind him before the final 50.

In fact, Freeman’s closing split was faster than any man in the 1650 at NCAAs last year, including the champion Finke himself who closed in a 24.79. Finke, the man who made the Florida closing speed famous, was the only man at 2021 NCAAs that came even close to Freeman’s closing split from SECs, as nobody else was within a second of it. The next-fastest closer at NCAAs was third-place finisher Ross Dant, who closed in a 24.95.

The mile gave Florida men have a massive lead with 1149 points, with Tennessee trailing a whole 391 points behind. Before the event, the gap between Florida and Tennessee was only 237 points, which goes just to show how much damage the Gators did with their distance swimming.

Anyone have the video to this race?

I found it …thanks!

imagine going 14:58 and STILL being 8th on the team

So they just took a 200 point lead and made it a 400 point lead after one event, even though their top swimmer (Finke) was absent from the event. That is dominance. WOW

And Hillis had to leave after first day

So far off of finke it’s not even funny