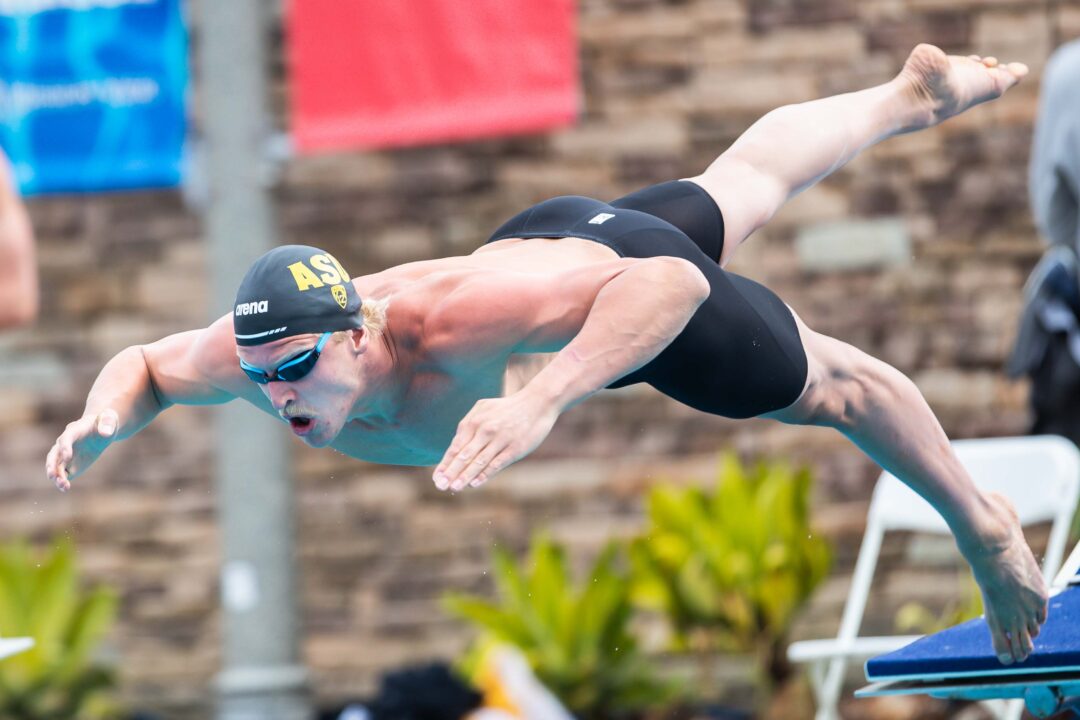 After an impressive summer, House has hit the ground running in his fifth and final season of NCAA eligibility. Archive photo via Jack Spitser/Spitser Photography

Gemmell had a monstrous showing at the Junior Pan Pacific Championships in late August, piling up six gold and seven total medals in Honolulu.

There’s a multitude of reasons why there’s been so much hype surrounding the swimming program at Arizona State University in recent months. Newly-minted world champion Leon Marchand, a growing pro group full of some of the best swimmers in the country, and of course, a strong coaching staff led by one of the greats, Bob Bowman.

As a result of all the attention being diverted elsewhere, Grant House is a swimmer that’s flown under the radar and had a low-key phenomenal last couple of months.

The fifth-year senior was sensational at ASU’s early-season intrasquad pentathlon, though his performances were overshadowed by Marchand.

His combined time for the pentathlon was 3:55.52, just over two seconds shy of Marchand (3:53.31), who is the greatest medley swimmer on earth at the moment.

This past weekend, House played a key role in leading the Sun Devil men to victory over Georgia and Mizzou, sweeping the 100 free (43.91) and 200 free (1:34.54) while also anchoring the victorious 200 medley relay with a scintillating 18.98 split.

To top it off, he led off ASU’s winning 400 free relay in 43.41. The day prior, he also swam on three winning relays in a smaller head-to-head dual with UGA.

A great summer has been followed up by an exceptional start to the 2022-23 season for House, and if he keeps this momentum rolling, he’ll be one of the favorites to vie for at least one national title in March.

I’m convinced that Grant is not actually real. There’s no way he’s a real person.

He is very real and now is working on a graduate degree at the ASU Sandra Day O’Connor School of Law, as well as swimming!

Grant has been a great mentor and “big brother” for Leon during his first year in the United States.