Ukraine – We Stand For You! Sport Builds Bridges Worldwide! 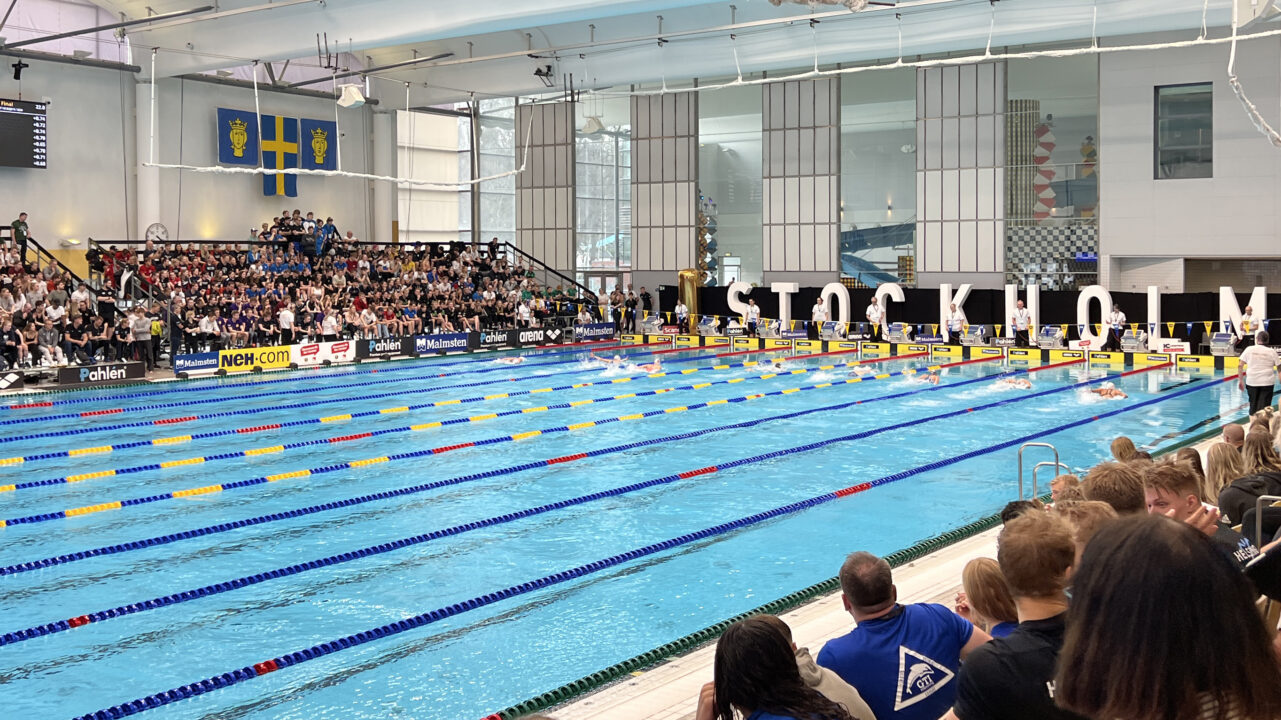 Swim Open by Malmsten, in Stockholm 9-12th of April, a world class event attracting many of the greatest swimmers in the world. Current photo via Malmsten

This time, check out, not only the athletes, but also the Gold PRO lane lines and back stroke flags in the Ukrainian colors produced for this event, as we are all so saddened by the conflict raging in this beautiful European country. No one could ever have imagined this to happen in 2022!

Malmsten has always had a very strong connection with swimming and aquatics. With our roots as active swimmers and swim coaches we follow our commitment to design and produce high-end aquatics sports equipment. You might know our Gold PRO racing lane lines, our Swedish Goggles and many more smart solutions. We have supplied equipment to ten Olympic Games, starting in 1976 and the last one in Tokyo 2021. Now we have an even stronger crew with Simon Percy and Mikael Orn on board, two excellent ex-elite swimmers, one NCAA-champion, heading our Malmsten USA.

Sports have always been a way to connect people worldwide; sports build bridges of understanding across cultures, languages, countries and people. Let us continue this great way forward!

Apart from sending our racing lane lines to Swim Open in the Ukrainian colors, Malmsten has also supported the Swedish Swimming Fede- rations actions 2-3rd of April – Swim for Ukraine – where a significant amount of money was donated (i.e., many many yards was swam) – to support the Red Cross’ important work along the Ukraine borders to assist refugees.

The teaming with S&R Sports is a great partnership. With a similar closeness to aquatic sports, we understand each other. S&R Sports, with over 30 years of supplying the world with water polo and swimming equipment, and founded and run by athletes from the sports, you will get a great service for all types of aquatics equipment. www.srsport.com

Malmsten is proud to partner with DB Perks and Commercial Aquatics Supplies in Canada, one of Canada ́s best pool distributors with a history of having a strong connection with swimming and aquatics. They have a strong team inclu- ding Bill Sawchuk, a two-time Olympian, with a swimming and coaching background. Jim Todhunter, Steven Zamis and Amanda Moffat, all very experienced in what aquatic equipment is all about.. www.commercialaquaticsupplies.com

From Swimmers for Swimmers – with a passion for aquatics
Malmsten established in Phoenix Arizona, in 2020, by former swimmers Mikael Orn and Simon Percy. Mikael and Simon both swam for Arizona State under Ron Johnson. Two different career paths and now teaming up in Malmsten Inc. Mikael was one of Tommy Malmsten ́s most successful swimmers and swam for Arizona State under Ron Johnson 1980 – 1984. He was the NCAA Champion 1983 in 200 yards freestyle and bronze medalist in the 1984 Olympic Games. In assuming leadership of Malmsten Inc., Mikael brings to bear his extensive experience as an IBM executive. He is a hands-on business le- ader with a track record of innovation, leading to market expansion and patents. Simon swam for the New Zealand National Team from 1990 to 1994 including the 1990 Commonwealth Games, 1991 World Championships and 1992 Barcelona Olympics. Simon swam for ASU from 1991 to 1994, representing the university at the NCAA and becoming an All Ameri- can and Academic All American. Graduating in 1994 with a Bachelor of Science. Since 1994, aside from his business career, Simon has coached swimming, including a return to Arizona State as an Assistant coach from 2006 to 2011. During the 2008 financial crisis, which forced ASU to cut the men’s swimming program, Simon teamed up with Mikael Orn, and other Alumni, securing funds to assure the future of Men’s Swimming at ASU, which thrives today under head coach Bob Bowman. A unique achievement in the Swimming community. Malmsten USA is a subsidiary of Malmsten AB – the Global Leader in Racing Lane Lines. Malmsten USA will be producing Classic PRO and Gold PRO Racing Lane Lines for the North American market in accordance with Original Malmsten specifications.

Our mission: “With a longstanding passion for aquatics, we design, produce and distribute high-end pool equipment with functionality, dura- bility and the environment in focus” – Mikael Orn, CEO Malmsten Inc.

With a passion for aquatics!

Courtesy of Malmsten, a SwimSwam partner.