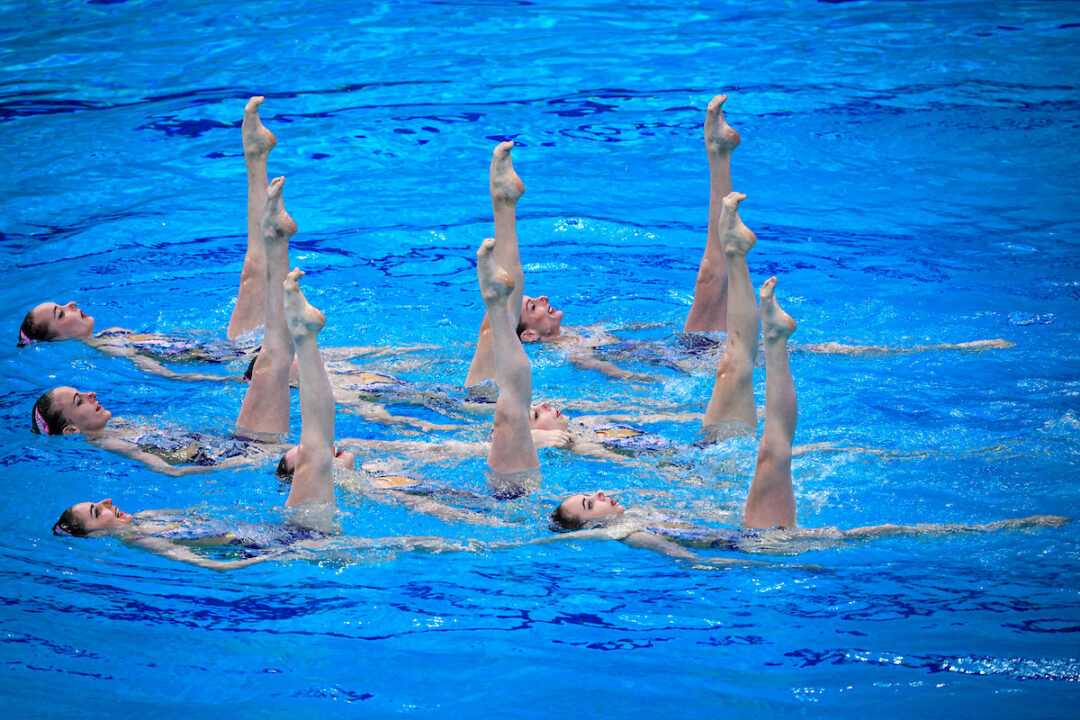 The Ukrainians were dominant at the European Championships in artistic swimming, winning eight out of a possible 12 gold medals. Archive photo via Pasquale Francesco Mesiano / Deepbluemedia / Insidefoto

The Ukrainian team wrapped up an ultra-successful performance in the artistic swimming competition at the 2022 European Aquatics Championships on Monday, finishing with eight gold medals to top the overall medal table by a wide margin.

Team Ukraine have dominated in the Artistic Swimming category at #LENRoma2022, picking up 8️⃣ gold medals 👏

Watch the Swimming finals LIVE from 18:00 CEST on https://t.co/o9O77EauXC pic.twitter.com/3cnGNwO1Un

The only other nation to stand atop the podium in the competition were the host Italians, who came away with four gold, six silver and two bronze medals to lead the total tally with 12 medals.

At the 2022 World Championships, Fiedina placed second in both events, with Japan’s Yukiko Inui claiming gold.

Italy’s Giorgio Minisini swept the men’s solo routines in what was the first time the events were contested at Euros.

It was a sweep for the Ukrainians in the duet routines, as twin sisters Maryna Aleksiiva and Vladyslava Aleksiiva came out on top in both the free routine (94.7333) and technical routine (92.8538). The duo, both 21, won silver in both events at this year’s World Championships behind China.

Austria placed second in both duet routines with another pair of sisters (who are two of three triplets), Anna-Maria Alexandri and Eirini-Marina Alexandri, while the Italian pair of Linda Cerruti and Costanza Ferro won bronze in both.

The Alexandri sisters are triplets with double bronze medalist from the solo routines, Vasiliki Alexandri.

Italy swept the mixed routines, with the pair of Giorgio Minisini and Lucrezia Ruggiero winning the free routine with a score of 89.7333 and posting a 89.3679 in the technical event.

With a score of 89.7333, the Italians capture the European title in the Mixed Duet Free. #LENRoma2022 pic.twitter.com/4MOYvrgQ18

Spaniards Emma Garcia and Pau Ribes combined to win silver in both, while Slovakia got on the board with a pair of bronze medals from Jozef Solymosy and Silvia Solymosyova.

The same Ukrainian squad won the world title in the highlight routine and the combination routine in June.

The Italians won silver in all four, while France claimed three bronze medals and Greece added one.

Without the REAL QUEENS, ITS NOT HARD.

that’s fantastic, it feels like a victory for a lot of causes not just the sport