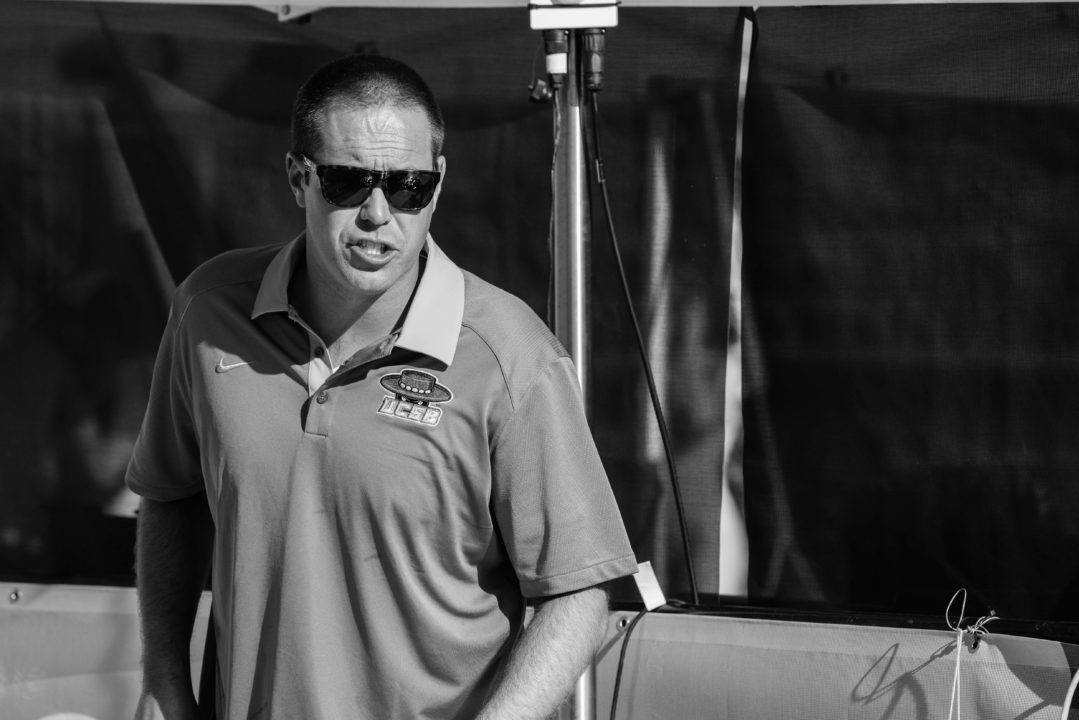 The Hawaii men’s and women’s swimming and diving teams rounded out their long weekend in California by splitting a tightly-contested dual meet with the University of California Santa Barbara.  The Rainbow Wahine built an early lead against the UCSB women, but it took a narrow win in the 400 freestyle relay to preserve the dual meet victory.

Franziska Weidner was the star for Hawaii, winning three individual events, including a key win in the 200 IM (2:01.98) to stifle UCSB’s momentum coming off a 1-2-3 finish in the 100 butterfly, and keep Hawaii in the drivers seat heading into the final relay.  The senior’s versatility was on display throughout the meet, with convincing wins in the 100 backstroke (55.81) and 100 freestyle (50.36).  Brooke Kniffin, Kasey Schmidt, Taylor Thorsen, and Anna Kotonen held off UCSB to win the 400 free relay, 3:27.08 to 3:27.76.  Had UCSB won, the meet could have ended in a tie.

The Hawaii swim and dive teams split up to close out the weekend with a swim meet at UC Santa Barbara and a dive competition at UCLA on Sunday.

“It was a good meet,” head coach Dan Schemmel said of the women’s victory. “We had a lot of people step up, which was exciting. The senior class had a great weekend. It was a total team effort and they did really well.”

“The men’s meet was against the defending MPSF champion, so we knew they were going to be tough,” Schemmel said. “It was solid. I don’t think that was a true representation of us. If we had swam the times we had swum earlier this year, it would have been closer, but it didn’t work out that way.”

The UH divers had a successful day at UCLA, highlighted by Madison Sthamann‘s second-place finish and personal-best score of 314.83 on the 3-meter board. Sthamann was just four points shy of UCLA’s Ciara Monahan, who won with a 318.83. UH freshman Ivy Houser finished 3rd with a 309.83. Jami Stone finished sixth in the event (251.85) and Mariah Renteria finished 8th (228.90).

The UH swim and dive teams will both return to action in the Texas A&M Invitational, Nov. 16-18 in College Station, Texas.

Today was the rivalry meet of the year for the Gaucho women. They were pumped up to take on last year’s MPSF Champion, Hawaii. The meet came down to the very last race of the day, the 400 freestyle relay but unfortunately Hawaii pulled ahead, won the race and the meet. Gauchos are very proud of this close meet and are fully focused on beating Hawaii in the MPSF Championships coming up in February. The final score of today was 129-138.

Head Coach Matt Macedo stated, “I thought our team performed well this weekend. We beat a tough Cal Poly team on the road and split with Hawaii at home. We had a good amount of in-season bests the last two days and look forward to our final fall dual meet against UCSD on Saturday. Heaven Quintana lead the way for the women with victories in the 100 breast and 100 fly and a second place finish in the 200 IM. Other big swims came from Rachel Forbes (2nd in 200 free), Elena England (1st in 200 back), Maddie Johnson(1st in 200 fly) and Rachel Kulik (1st in 50 free and 2nd in 100 fly).”

Heaven Quintana had an extremely outstanding day with fast swims in three individual events and one relay. Heaven blew people out of the water by beating the next woman by one second in the 100 breaststroke (1:03.54) and beating the next woman by two seconds in the 100 butterfly (54.07). Once the 100 butterfly was over she didn’t even have time to warm down because she raced in the 200 individual medley immediately after. She fell short to Hawaii but still took second place (2:03.80), earning her team a total of 22 points total in individual events.

Rachel Forbes had a fantastic race in the 200 freestyle. She started off the race with a huge lead in front after the first 50, kept onto the lead after the 100, and on the final lap was barely out-touched by Hawaii. This was an incredible race from Rachel, earning herself second place with a time of 1:52.54; less than 0.1 seconds behind first place.

Elena England had a highlight race today in the 200 backstroke, winning by an amazing 3 seconds (2:01.56). She also placed second in the 100 backstroke (56.89) falling to Hawaii by only one second.

Maddie Johnson and Rachel Forbes were neck and neck with Hawaii throughout the 200 butterfly race. Maddie had a highlight race because she pulled in front after the first 100 and snatched first place (2:06.67). Followed by Rachel who secured third (2:10.31) and proved another great race from her.

Rachel Kulik was extremely successful in today’s meet. Earning first place in the 50 freestyle and second 100 butterfly. The 50 freestyle was a sweep from UCSB placing first, second, and third places. Rachel finished with a time of 24.16 followed by teammates Jacquelyn Harris (24.18) and Leanne Sun (24.22). Rachel then went on to be apart of ANOTHER sweep from UCSB in the 100 butterfly. She followed Heaven Quintana and scored second (56.55), then followed by Jacquelyn Harris (57.04) who finished third.

The UCSB “A” relay started off the meet with a win against Hawaii in the 200 medley relay. Heaven Quintana pulled ahead in the butterfly, followed by teammates Rachel Kulik and Leanne Sun holding the lead to acieve frist (1:44.38).

Emily Ward (1:54.01) and Haley Herzberg (1:54.23) followed after Rachel Forbes in a highlight race of today, the 200 freestyle. These women placed fourth and fifth after battling each other throuhgout the event.

Jacquelyn Harris (52.11), Emily Ward (52.19), and Leanne Sun (53.10) were in a friendly competition towards the end of the 100 freestyle finishing within one second of each other. They placed third, fourth, and fifth being rewarded with 6 points from their race.

Catherine Boles (2:06.96) and Micah Toetter (2:07.14) helped the team by earning 3 points in the 200 backstroke. They were behind Elena England who had a highlight race in this event.

Brittney Straw had a great battle with Hawaii in the 200 breaststroke but unfortunately couldn’t steal the lead in the last lap and placed third with a time of 2:21.03; one second from first place.

At the end of the meet, UCSB was only five points behind Hawaii. It all came down to the final race of the day, the 400 freestyle relay. The Gaucho “A” relay consisted of Emily Ward, Leanne Sun, Emily Boggess, and Jacquelyn Harris. This was the most exciting race of the meet because UCSB was tied with Hawaii throuhgout the entire race. All the fans in the crowd were standing, both men’s and women’s teams were cheering at the side of the pool, the coaches were yelling at the top of their lungs. Unfortuneately UCSB was out-touched at the final reach of the race. Finishing with a time of 3:27.76 only 0.7 seconds behind Hawaii.

UCSB looks forward to meeting the Hawaii team again at MPSF Championships where they plan to strip Hawaii of their last year’s title.

Join the Gaucho women at Campus Pool next Saturday as they take on UC San Diego at 11am.

SANTA BARBARA, Calif. – The UCSB men’s swimming team displayed early that it was ready for its meet against Hawaii on Sunday, and with a pair of sweeps and other personal bests, the Gauchos routed the Rainbow Warriors, 141-112 points.

Head Coach Matt Macedo stated, “I thought our team performed well this weekend. We beat a tough Cal Poly team on the road and split with Hawaii at home. We had a good amount of in-season bests the last two days and look forward to our final fall dual meet against UCSD on Saturday. On the men’s side, Mason Tittle continued to excel winning both sprint freestyles and coming from behind to win the medley relay by a few hundredths of a second. Billy Mullis won both backstrokes and was second in the 200 IM. Yoessef Tibazi put up a very impressive 47.92 in his 100 fly victory and was second in the 50 freestyle. Junior Eric VanBrocklin stepped up and swam and incredible lineup today. Eric was 3rd in the 1000, 3rd in the 200 fly and won the 500 freestyle. Those are three of the toughest events in a dual meet and he swam them all very well.”

Mason Tittle swam an incredible race today in the 200 medley relay. He was behind by half a body length as he dove in to anchor the “A” relay. Over the two laps, he advanced towards the Hawaii swimmer and passed him at the final flags, securing the first win of the day for the Gaucho men. His time was an impressive 20.00 for the 50 freestyle.

Eric VanBrocklin pulled out ahead after the first 150 yards in the 500 freestyle. Then continued to charge ahead, earning a full body lengths lead by the halfway mark. Determined to win, he kept the lead and finished in first place with a time of 4:33.67. Eric had another great swim in the 400 freestyle relay. He went a 45.4 in the final leg of the race and secured the win for the Gaucho men.

Billy Mullis won a tough battle today against Hawaii’s Metin Aydin in both the 100 and 200 backstrokes. Billy was not willing to be defeated in either race. First in the 100 backstroke, Billy had a lead after the first 50 and continue to hold onto the lead to win it with a final time of 48.71. Then in the 200 backstroke, it was Billy winning after every wall with great under water swims, and Metin catching up with the swims. Billy kicked it into gear the final lap and pulled ahead with his second first place of the day with a time of 1:46.00.

In the 100 breaststroke, Marcello Quarante (58.14) and Joe Kmak (59.59) were the only Gauchos taking on Hawaii. But they pulled a fantastic second and fifth places.

Mason Tittle took his second win of the day in the 50 freestyle with a time of 20.44, just 0.44 seconds away from his amazing 200 medley relay performance. Right after came teammate Yoessef Tibazi (21.39) who was followed by four other men all with a 21 time. One of these men was Michael Forbes who finished with a 21.77, earning himself fifth place.

Teammates Ethan Archer (1:53.49) and Douglas Nogueira (1:55.58) followed after Billy Mullis in one of the highlight races of the day, the 200 backstroke. Ethan and Douglas took fourth and fifth places.

In a highlighted race of the day, Joe Lastelic (4:38.71) and Logan Hotchkiss (4:42.26) finished in third and fourth after teammate Eric VanBrocklin had a fantastic win.

Senior Yoessef Tibazi finished with an outstanding 47.92 in the 100 butterfly. Followed by teammates Kevin Mendoza (49.57) and Kian Brouwer (50.15) snathcing third and fourth.

Join the UCSB men as they take on UC San Diego next Saturday at Campus Pool starting at 11am. Go Gauchos!