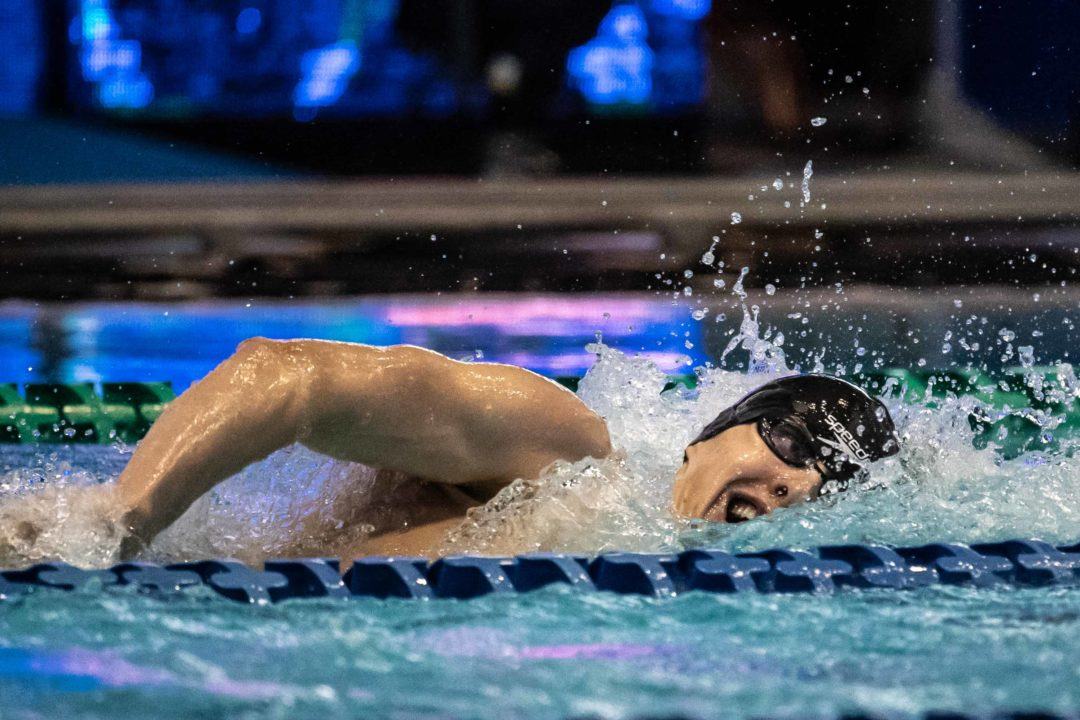 Alexander Pratt will be one of the keys for the UBC men if they want to hold off Calgary and win a fourth straight U SPORTS championship. Archive photo via Mike Lewis/Ola Vista Photography

The University of British Columbia men’s and women’s teams will be looking to win their fourth consecutive titles at the upcoming U SPORTS Swimming Championships in Victoria, where the best university swimmers in Canada will battle head-to-head.

The Thunderbird women won decisively over the competition in 2017 and 2018, but only narrowly escaped by a 25-point margin over Toronto last season. This year it projects to be relatively close once again, but UBC maintains the advantage.

While those two teams have the best overall scoring, the top individual performer so far this season has been the University of Manitoba’s Kelsey Wog, a 2016 Short Course World Championship silver medalist in the 200 breaststroke. While she’ll be limited to four individual events in Victoria, Wog is the fastest swimmer in the country in six races this season. The 21-year-old should easily sweep the breast events, like she did last season, and will likely be the favorite in whatever fourth event she picks. In 2019 it was the 200 IM, which she won.

The other standouts on paper coming in are Calgary’s Danica Ludlow, Victoria’s Danielle Hanus and Toronto’s Hannah Genich.

Hanus won silver last year in both the 50 and 100 back (behind world champion Kylie Masse) and comes in ranked first this year, and also leads the field in the 200 IM and is second in the 200 fly (which she has won the last two seasons).

Genich got on the podium in all three fly events in 2019, earning two silvers and a bronze, and comes in this year seeded first in all three. She was also the 2017 champion in the 200 fly.

Since Toronto won in 2016, the UBC men have been dominant over the last three years, winning by an average of 180 points. However, this time things project to be much closer.

The University of Calgary Dinos have emerged as the runners-up each of the last two seasons after a distant third in 2017 and gave the Thunderbirds all they could handle at the Canada West Championships in November, falling by just five points.

In addition to those two, the Toronto men are coming off their 17th straight Ontario title, and McGill is fresh off winning the Quebec crown.

Among the key names to watch for the men include Calgary’s Robert Hill, McGill’s Clement Secchi and UBC’s Brodie Young.

Hill ranks first this season in the 50 and 100 back and is also top-4 in the 200 back, 100 fly and 200 IM. Secchi is coming off a six-gold-medal performance at the RSEQ Championships and is the top-ranked swimmer nationally in the 100 free, 50 fly and 100 fly, and also second in all three backstrokes. Young, meanwhile, ranks first in both individual medley events.

It’s worth noting that their respective rankings this season are all based on short course meters times, and the finals here will be raced long course. But, all three have had success in the big pool.

Another thing to keep an eye on is the battle in the mid-distance freestyle events, where Ottawa’s Davide Casarin and UBC’s Alexander Pratt will go to battle. Last year they went 1-2, respectively, in the 400 free, and finished 2-3 in the 200 behind Olympian Markus Thormeyer.

All sessions will be live-streamed on CBC.ca, with prelims beginning at 10 am and finals at 6 pm Pacific time.

Upon release of the psych sheets, both Thormeyer and 2016 Olympic gold medalist Emily Overholt are entered for UBC as well despite not competing in varsity meets throughout the season. This swings things even more in UBC’s favor to repeat.