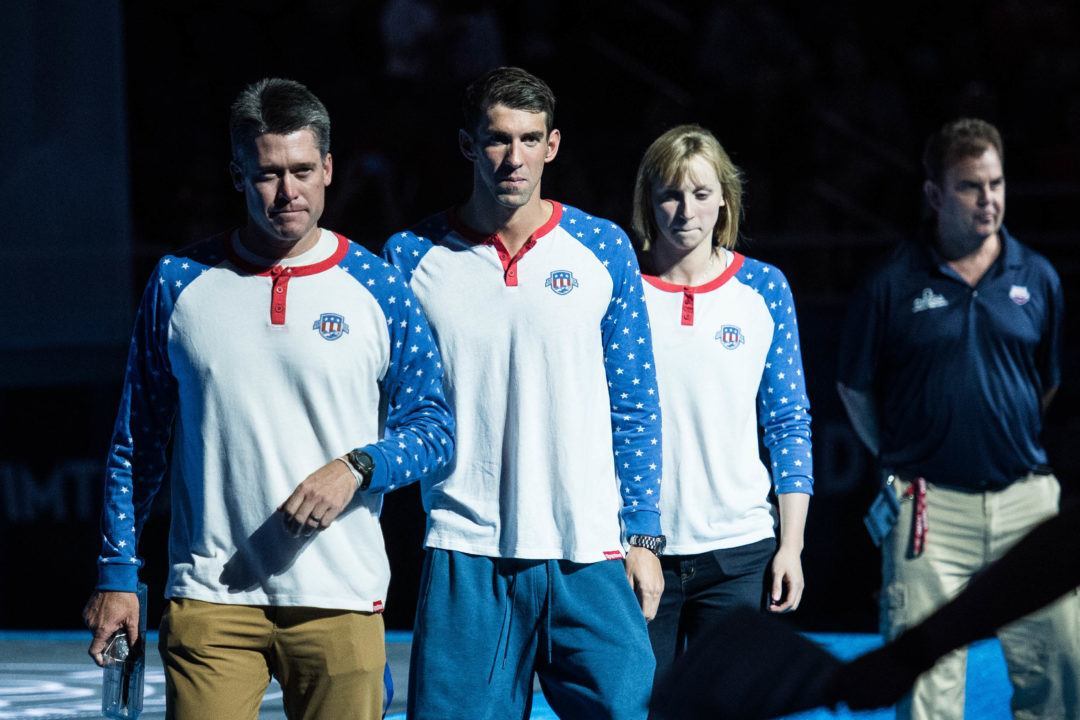 Michael Phelps and Katie Ledecky were named the swimmers of the meet tonight in the closing ceremonies of the 2016 U.S. Olympic Trials.

Katie Ledecky of Nation’s Capital and Michael Phelps of the North Baltimore Aquatic Club were named the top female and male swimmers of the meet in the closing ceremonies of this week’s U.S. Olympic Team Swimming Trials.

This week, the duo were two of three swimmers to pick up a three individual victories apiece (the third was Maya DiRado).

That looks like a pajama top they are wearing

Where are the matching binkys?

Cute on the ladies, awkward on the men!

That’s exactly what I said when they came out!

Phelps didn’t swim in the 100 free? (Lochte did, though I think just prelims.)

Dirado and Adrian would have been more deserving (if you are talking about performance in this meet alone).

I’m talking about what the accomplished at this meet. Ledecky came in an performed as expected (which as always is phenomenal), and will certainly be the biggest performer in Rio. But for Dirado I thought it was both unexpected and exceptional that she was able to land her spots on the Olympic team.

And as for men I would argue between relays and individual events, Adrian is the most valuable swimmer on the male side we currently have.

Surely someone had a breakthrough performance or is an inspirational character going to their first Olympics. I don’t think Ledecky or Phelps need anymore validation of their ability.

The man of the match doesn’t always have to be the one who scores the goals.

there’s generally a pretty easy “formula” for these awards, at any meet. It’s almost always “who had the most wins.” If there is a tie for most wins, then they will look to other factors, such as quality of time, or whether one of the candidates also has a 2nd or 3rd, etc.

Ledecky and Dirado both had three wins, but ledecky’s times were better. Pretty clear cut.

On the men’s side, phelps had the most wins. Even easier decision.

It’s not about validation. It’s about being the swimmer of the meet. They deserve it. Our young people need to stop getting awards because somebody else always earns it.

Sounds like the same argument that cost MJ some MVP awards in the NBA. The award goes to the best not to the freshest face or cool new member of the stud club. As everyone pointed out KL swims are way better than Dirado and Phelps was the only mail with three wins.
I an hopping that Dirado is the one this year who swims out of her mind for gold. Seems we have one out more total surprise every Olympics. I still watch Mysty Hyman’s 2Fl a couple of times a year!

It’s not about validation of ones ability, it’s about acknowledging the most outstanding performance based off of the statistics of the finals of the meet. Doesn’t always have to be who scores the goal…I bet you’re the type of person that wants every child to get an award for graduating third grade so nobody’s feelings get hurt.

No I’m not at all. I’m not one for a culture of pansies. Kids should learn through sport that there are winners and losers in life, people arent rewarded if they don’t perform in the real world. But there really isn’t much point having this award if it just defaults to who wins the most. They’ve already won, they know that by the medals round their neck. Worthless, pointless and lazy. Its just idolisation. I think it should be more like in cycling where they have the combativity award to the cyclist who, on the day, was aggressive and performed well beyond their normal capability. Maybe they should have swim of the day and scrap the best of the meet… Read more »

Don’t really understand the importance of having ” swimmer of the meet” at Olympic Trials. The goal was to make the TEAM and TEAM is what it is all about. They are all “swimmers of the meet”!

Overall, I think the awards went to the two best performers: 3 wins each for MP and KL, with high degree of difficulty rating too: great times for KL and the age factor for MP.

These 3 events were just walk in the park for Phelps as compared to his heavy schedule in previous 3 trials !
I wonder what level of diff was betn Phelps n rest back then when I didnt follow us trials.