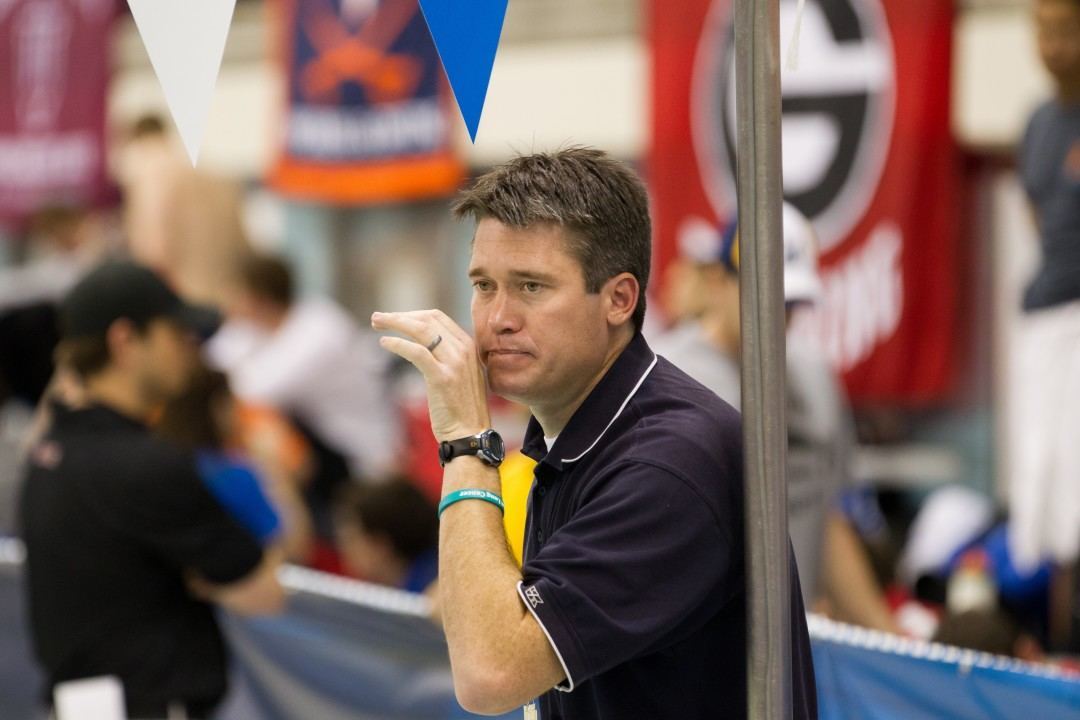 Tonight, Dave Durden was named the Coach of the Meet in the closing ceremonies of the 2016 U.S. Olympic Team Trials. Current photo via Tim Binning/TheSwimPictures.com

The University of California- Berkeley’s head coach Dave Durden was named the “Coach of the Meet” in tonight’s closing ceremonies after placing six swimmers on the 2016 U.S. Olympic team. His athletes are listed below:

Today, Durden was also named one of the three assistant coaches on the Olympic men’s team. Bob Bowman of North Baltimore and Arizona State will be the men’s head coach, and Durden will join Mike Bottom of Michigan and Jack Bauerle of Georgia as the assistant coaches.

And their assistants should all be acknowledged for great work too! Not enough recognition for the work of Yuri and all the work by each one of the assistants of these coaches. They would not have the success without the work of the people ‘behind the scenes.”

So true. Prenot mentioned Yuri immediately after his big win

I have no idea if this will work. There’s a really good video on Cal Men’s Swimming facebook page that I wanted to share that’s very relevant to this post.

Yup, I tried embedding a facebook video but it didn’t work. But yes, a lot of hard work from all the staff should be celebrated 😀

Those of us who follow the program closely know that Dave talks about the entire staff a lot. Here is his interview from two days ago…around the 4:15 mark he talks about how many people make this thing work. https://www.youtube.com/watch?v=spG0HheuYDk

Yuri deserves the head UNC job. Have to think that will be sooner than later

Also props to Seth Stubblefield, he showed up big time! A heartbreak to miss the team by 0.04 but a fantastic performance.

The Cal medley relay could win a gold medal at Rio.

3:30.94 would’ve beaten every other country at the last olympics.

Their B relay is incredible too!!!!
what would that be?? they just need a breaststroker..

And this is flat start! relay start and they break the world record.

And don’t forget Durden’s “Coaching Tree”: Stanford coach Greg Meehan who was Durden’s assistant until after the 2012 Olympics was also named a US asst Oly coach this weekend!

Very well deserved!
It’s not often that one coach is clearly the most successful at an Olympics trials level, but this is one of those.

Incredible Cal Team on this Usa team – very impressive . Well done for this overall Team of coaches .They will all do great things within one month .