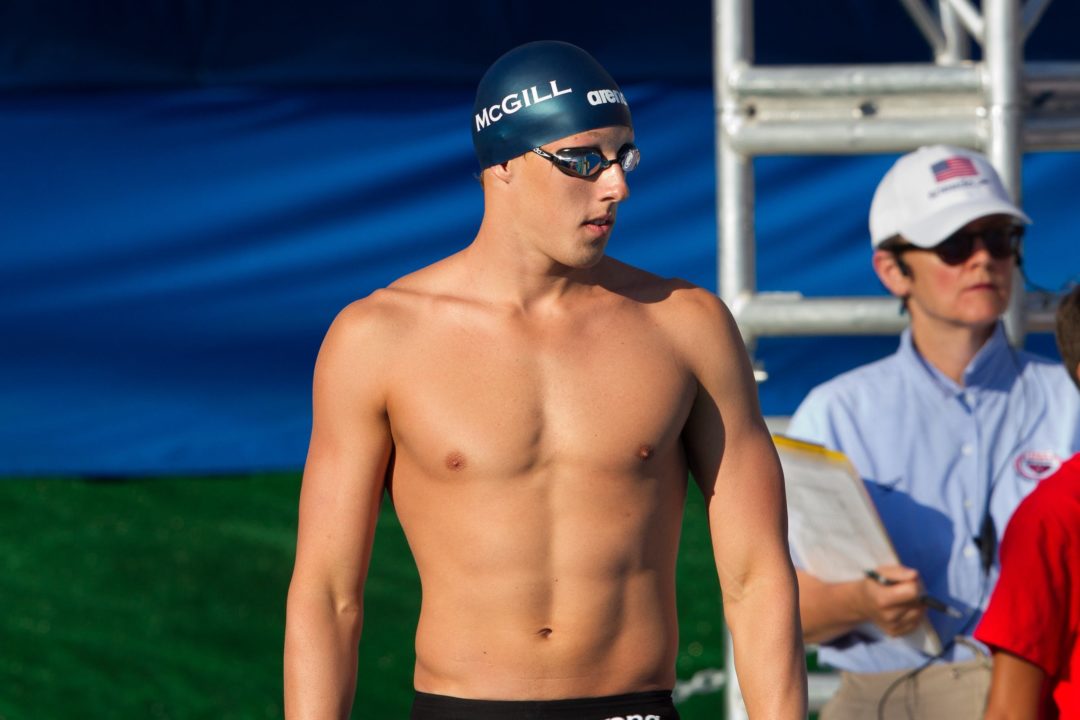 Tyler McGill talks training, the Olympics, and who he's keeping an eye on for Thursday's 100 fly. (Photo: Tim Binning/TheSwimPictures.com)

With the 100 fly final at the world championship trials coming up on Thursday night there’s definitely a vacant spot opened up with the absence of none other than Michael Phelps. The field is loaded with talent, all of them itching to get a chance to jump into the spot light and make their debut on the world scene. The top two seeds in the event (Ryan Lochte and Tyler McGill) are the only two swimmers who have experience on the world stage in a long course pool. Great college swimmers such as Tom Shields and Tim Phillips are looking to challenge the two for a spot on the team. If there is a favorite heading into this race, it has to be Tyler McGill.

McGill made his debut on the national team in 2009 when he placed second to Phelps at the World Championship trials earning him a spot on the team in Rome. Since then McGill has been on every international team including the 2011 World Championships in Shanghai and last years Olympic Games. McGill’s top finish was in 2011 where he received the bronze in the 100 fly. Last summer McGill finished 7th in one of the tightest 100 fly finals that the world has ever seen.

After the games McGill took some time off. “I needed a mental break after the games,” McGill said. “I took a couple months off and that was exactly what I needed to get in the right mindset for training. I really think it was the best thing for my swimming.” Since then McGill has done nothing but work towards the trials. McGill’s looking at 2013 as a new year, “Olympics were last year. What you did last year doesn’t matter to the same extent. You need to make sure you’re working hard every year. You need to stay hungry.”

Stay hungry. If there were ever two words to live by, it would be those. With Phelps gone however, McGill has taken the spot as the top sprint flyer in the States. Being the top flyer comes with one big responsibility: the 4x100m Medley Relay. Assuming McGill takes the top spot in the sprint fly on the team, he’s going to have the responsibility of swimming the fly leg that Phelps has dominated over the years. With the absence of star swimmers Phelps and Hansen on the relay this summer, the US men look like they might have their hands full with international competition. McGill thinks that they’ve got just as good of a chance to top the podium as ever, “I think that we’ll be equally successful. I’ve swum on the prelim team over the years and people don’t realize it but it’s the same pressure as in the final. The four guys in the prelim put together a fast swim. Our prelim teams have been fast enough to place third or fourth in the finals, so we definitely have a shot this year. We’ve got some fast guys and I think we’ll put together a fast swim.”

Again assuming that McGill makes the team, he’s going to have his hands full internationally. Last year’s top place finish and eighth place finish in the final were separated by only 0.84 seconds. Phelps took the gold with a time of 51.21 followed by a tie for silver in 51.44. McGill finished seventh in 51.88, amazingly only 0.44 seconds away from a silver medal. “It’s going to be a tight race. The two guys who tied for silver last year are swimming well. Deibler has been fast this season. There’s a huge depth in the field this year. The winner at the championships is going to be the guy who has the speed the last 15-20 meters and gets his hand on the wall first. It’s going to come down to shutting your brain off, going with your killer instinct, and just racing.”

The World Championship final should be a tight one, but the trials final might be just as exciting of a race. Ryan Lochte is the second favorite to make the team but one factor might give a couple of the other swimmers an advantage heading into the final: Lochte’s schedule. Lochte has the 400 IM final almost immediately before the 100 fly final. With Lochte’s lack of training this year it could definitely effect his ability to make the team in the 100 fly. McGill isn’t counting him out though, “You can’t count a guy like Phelps or Lochte out. You’ve got to assume that any time they get on the blocks their going to be at their best and swim a good race.”

The other swimmers however are all drooling thinking about a spot on the team. “There’s a handful of guys that could make the team,” McGill said. “Tom Shields has had a great college career, Tim Phillips has a lot of speed. You’ve got to assume that Eugene Godsoe and Giles Smith will be in the mix as well. Whoever is going to make this team needs to bring their A game.”

The finals take place Thursday night and they should be one of the most anticipated finals at the trials. Tons of young talent as well as some experienced members of the national team will all be in the mix for a position on the team. It’s going to come down to which to swimmers can get their hands on the wall first.