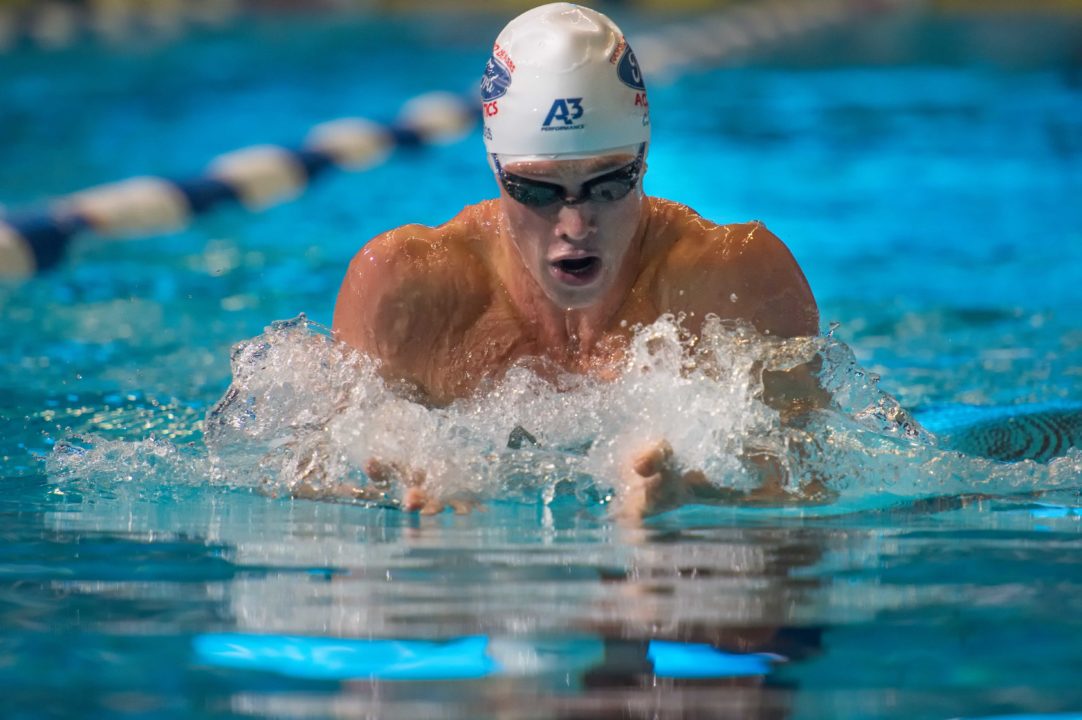 Kevin Cordes will look to put up something special tonight in the men's 200 breast (photo credit: Mike Lewis, OlaVistaPhotography.com)

Night one of the 2013 World Championship Trials brought us a nice mix of fresh faces and good stories to go with the usual suspects.  Maya Dirado, Tom Luchsinger, Simone Manuel, and Michael McBroom all qualified for their first top-tier National Team., while Missy Franklin, Nathan Adrian, Katie Ledecky, and Connor Jaeger proved they are all be threats to do some damage in Barcelona.

What’s in store for night two?  Franklin and Ryan Lochte both have monster doubles tonight (200 free & 200 back), some potential history in the breaststroke events, and a wicked battle in the men’s 200 free and women’s 200 back.

Before we make some last-minute picks for tonight, here are the biggest stories from the morning…

A bunch of big-name American women won’t have a shot to make the team in the 200 freestyle tonight.  Allison Schmitt, the top seed and defending Olympic champion, finished 10th in 1:59.78.  Her training partner, Megan Romano, a Trials finalist and short course American Record holder, was more than three seconds off her seed after swimming a lifetime best in the 100 last night.  Elizabeth Pelton, who finished second at NCAA’s this spring and was seeded in the top eight coming into this morning, barely snuck into the B-final.

After taking a year away from school to focus strictly on the Olympic journey, Schmitt returned to Athens this year for what turned out to be a storybook ending from a team perspective: team titles at SEC’s and NCAA’s, an individual 200 free title, and an American/U.S. Open record in the 800 free relay to top it off.  I doubt anybody expected Schmitt to duplicate her success from last summer; it’s tough to raise the bar from setting American records, winning multiple gold medals, and establishing yourself as one of the best mid-distance swimmers in the last decade.  But she was a whopping six seconds off her personal best this morning.  She’s been faster than 1:59.78 47 times in her career.  That’s the shocking part.

Expect Schmitt to be back.  We’ve seen things like this happen before; after winning three golds at the Beijing Olympics and two more the following summer at the 2009 World Championships, Matt Grevers had a poor 2010 summer season, and failed to qualify for the Pan Pacs and 2011 World Championships squads.  Grevers adjusted his training, refocused, and ultimately things have turned out pretty well.  If Schmitt plans to continue swimming for the next few years (and all indications are that she does), chances are high that she’ll rebound, too.

Note: The word on deck is that she is under the weather, but this hasn’t been officially confirmed or denied.

All three of the top seeds are capable of medalling in this event in Barcelona, but only two will go.  Even though it looks like Missy Franklin has set herself apart from the field (and the rest of the world, too), tonight’s likely race for second (the “Battle of the Elizabeths”?) between Elizabeth Pelton and Elizabeth Beisel should be a good one.  Beisel has typically had the upper hand in the long course pool, and her lifetime best is almost two seconds faster than Pelton’s.  However, Pelton improved dramatically in her first year at Cal, smashing the American and U.S. Open record in the SCY 200 backstroke.

3) Something special in the breaststrokes?

Corny/cliché alert: somebody call the fire department, because Breeja Larson and Kevin Cordes might set the natatorium on fire tonight.  Larson and Cordes (who are both SCY American/U.S. Open record holders in this event) looked like they were in cruise control this morning coming home.  Although Larson could see a challenged from her in-state rival Laura Sogar or fellow Olympian Micah Lawrence, the path looks pretty clear for Cordes to do some serious damage.

4) How much do Lochte and Franklin have in the tank?

The two biggest names for Team USA have proven they can take on a heavy event load at international meets, but there are always lingering effects towards the end of the meet when fatigue really starts to set in.  Both have a nasty 200 free/200 back double tonight, and it’s entirely possible they could each attempt four more individual events before the meet is over (400 IM, 100 fly, 100 back, 200 IM for Lochte… 50 back, 100 back, 200 IM, 50 free for Franklin).  It’s likely they will both scrap one of those, but it will be interesting to see how the faces of USA Swimming handle the increased workload in Barcelona.

Can’t wait. Some things I’m looking for: -What will Ledecky put up in the 200 free? She’s a dominant long course swimmer, but does she have the speed to keep pace with the likes of Franklin? I think for sure she will get a spot on the 800 free relay. -How fit is Lochte? Tonight he has the 200 free and back, and he’s facing some stiff competition, especially in the 200 back. Will his out-of-the-pool endeavors catch up with him? -Cordes. He’s been hyped since the NCAA championships and so far, he has lived up to expectations. How fast will he go? -The men’s 200 back. By far, the race of the night for me. Can’t wait to see… Read more »

very good resume Philip !!! 200 fee for men is really stacked with talent as well as the 200 back . Great races coming up tonight .

Should be fun to watch. vreeland or Ledecky for 2nd spot in 200 fr. I think jaeger can possibly make it into that 800 free relay. The 200 back will be interesting to see if pelton can finally beat her LCM times but Beisel had a solid prelim. That’ll be a good race. All 3 of the teenage 200 backstroker were 1:57 this morning so we’ll see which one of them gets to the wall first.

maybe she’s been working on her endurance? haha