Kendyl Stewart Scratches 200 Back for Day 2 of Finals 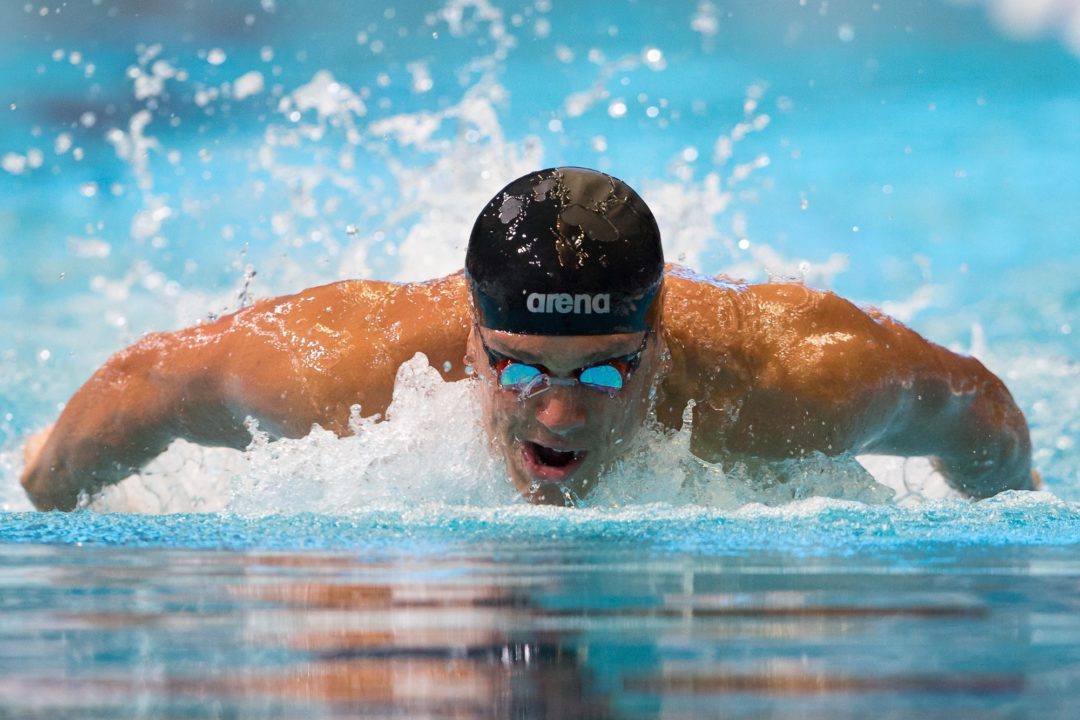 Tom Shields is amongst the list of names not returning tonight for finals. (Photo: Tim Binning/TheSwimPictures.com

The second day of preliminary swims at the 2013 World Championship Trials and US National Championships didn’t fail to keep us on our toes with some exciting races this morning. Tonight, we won’t be seeing nearly as many scratches, but some do come as more of a “surprise” than others.

Some big names dominated the women’s 200 backstroke today (Franklin, Pelton, Beisel, just to name a few), and it never ceased to be an exciting swim to watch. What may come as a shock to some, though, is that 4th place finisher (going in to finals) Kendyl Stewart has decided to scratch. Stewart had a minor time drop from her seed time (only about .55-seconds). It seems as though she’s decided to scratch in order to save her energy for her later swim of the 50 butterfly (A smart move?). Stewart  is seeded first going in to finals this evening between Claire Donahue and Christine Magnuson. Neither Donahue nor Magnuson will have swam earlier, going into the 50 butterfly fresh, focused, and energized. Seeing as Stewart is only .05 ahead on Donahue, the 50 butterfly will be one to watch.

Sarah Denninghoff will take her place in the A-final of the 200 backstroke, bumping up from 9th place with a time of 2:12.54.

With Kevin Cordes dominating, the 200 Breaststroke kept us on our toes.

B-Finalist Chase Kalisz has scratched, and will not be returning for tonight’s final swim. Kalisz was seeded 9th coming out of prelims with a time of 2:14.06 (less than a second time drop from his seed time). Kalisz may be saving his energy for his IM events, where he is seeded 3rd in both the 200 and 400. He will swim his 400 IM tomorrow.

B-Finalist Michael McBroom has decided to scratch this event, after finishing 13th in his preliminary swim. McBroom had a time drop and seed-jump from his psych-sheet placement of 28th, with a time of 1:50.91. In prelims, he dropped to a 1:49.66. Later this week, he will be swimming the 400 and 800 freestyle, where he’s seeded 6th and 4th, respectively. Yesterday, McBroom placed 2nd in the final heat of the 1500 freestyle (14:59.12) behind Connor Jaeger.

Elizabeth Pelton will be scratching from her 16th spot in tonight’s 200 freestyle. After an upsetting swim –she was seeded 8th with a 1:58.52– she has decided to focus mainly on her 200 backstroke final (she’s seeded 3rd). With all of her energy focused on one event, she could be giving second-place seed Elizabeth Beisel a run for the spot.

After a rough swim this morning, going from the 4th seed (1:57.54) to the 17th seed (2:00.73), Megan Romano will have the opportunity to “redeem” herself (so to speak). Tonight, she will be taking Pelton’s spot in the B-Final. With this “set-back” in mind, could we be seeing a time-drop from Romano?

It seems as if NCAA Champion Tom Shields will not be swimming in tonight’s finals. Shields placed 10th in his preliminary swim, with a time of 24.33. On paper, he was seeded 3rd in this event behind Tyler McGill and Ryan Lochte (though Lochte didn’t swim in the prelims today).

Because Scott Stubblefield also decided to not swim, Roger Miesfeld, from Wolfpack Elite, will be taking Shields’s spot in tonight’s B-Final. Miesfeld will be moving up from his 18th spot (after prelims), with a time of 24.83.

Was hoping to see Tom Shields shine at this meet! Look forward to seeing him come through in the 100 fly.

Yes. What happened to Tom Shields in the 50 fly? It’s a race for him in LCM.

I hope he will deliver on 100 butterfly as well . His 200 was decent but far from what i beleive he can do on LC .

She has swum a very decent 100 free with a new PB in 53.90 so she should be happy. But 3 other girls have been on fire and were faster than this time and almost nobody could predict that. She’s in the relay. And she will be very usual in Barcelona. She’s a monster relay swimmer. About the 200 free there’s no surprise. She’s now a sprinter.

I still think shes got 200 free potential. Like you said, she should focus on freestyle races. I thought maybe she should keep training for 100 back but I’ve changed my mind.