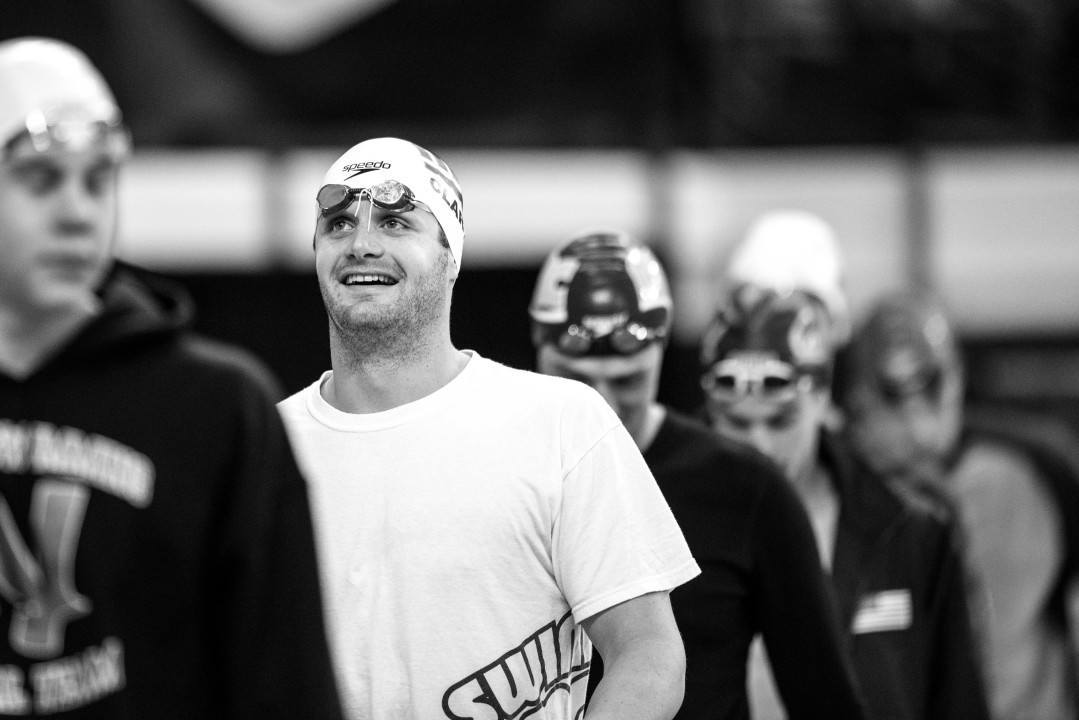 2012 Olympic champ Tyler Clary will join the coaching staff at the Hotchkiss School in Connecticut, he announced on his Twitter page this week. Archive photo via Mike Lewis/Ola Vista Photography

2012 Olympic champ Tyler Clary will join the coaching staff at the Hotchkiss School in Connecticut, he announced on his Twitter page this week.

Clary says he’ll start in February, joining the staff at the boarding school with a total body of about 600 students in grades 9-12. The boys high school season has already begun, with the first meet on the team’s listed schedule taking place next Saturday, January 14. Head coach Keith Moon noted that the current Hotchkiss group is a young but coachable crew. They’ll now get to learn from Clary, who won Olympic gold in 200 back in London.

Clary has long been one of the nation’s top all-around swimmers, but was continually blocked out of Olympic berths in the IM races due to Michael Phelps and Ryan Lochte continuing to dominate the world into their 30s. Clary made the Olympic team in the 200 back in 2012, but missed the Rio team as young swimmers rose up in both the 400 IM and 200 backstroke for the United States.

Hotchkiss will host the team’s end-of-season meet, the New England Championships, in early March. Per the school’s website, the staff previously included Moon and assistant John McBratney. Clary’s Twitter announcement of his new job is below:

I'm excited to announce that I'll be part of the coaching staff at The @HotchkissSchool beginning in February! @SpeedoUSA @chocolate_milk pic.twitter.com/mKjAV4JdwA

I know one thing only – when I want to show how to swim backstroke to our children, I show them Clary’s 200 back from London. Not Phelps and not Lockte.

I don’t doubt that you know nothing else

The head coach’s name is Keith Moon? That is pretty cool.

I thought the same thing

As a Hotchkiss alum, couldn’t be more excited!

Good luck to Hotchkiss when they face the hilltoppers next weekend. We’ll be sure to warm them up for you, Tyler. Go hop!

I always admired his toughness. He’s swim that 400 LCM IM dead tired in the middle of heavy training all the time. Plus he had that killer anchor leg on the 800 free relay at 2014 worlds.

That Anchor was amazing indeed

Clary will be a stone’s throw away from Lime Rock Park, one of the best road racing facilities in the northeast. It seems perfect for him. I wish him well.

Class act, told the truth about Phelps and never recovered on social media or with fans.
Extremely underrated, one of the best swimmers of all time, his versatility and range is highly impressive.
Good luck to him.

I believe his comment was in regards to Phelps 400IM which was the only event Clary competed with him in. And we all remember how well Phelps did in London with that event…. Clary was right!

And Phelps admitted that what Clary said about Phelps’ work ethic at the time was true. He just didn’t attribute it to Clary.

He doesn’t look particularly fat on the photo. I thought he would already weigh at least 250 pounds a few months after his retirement. Bad prediction.

I wonder how much money you lost at the Olympics this past summer.

That would be Marco Koch in season leading up to Rio.

u didnt nail it this time LOL

Have to admit I was thinking the same thing.