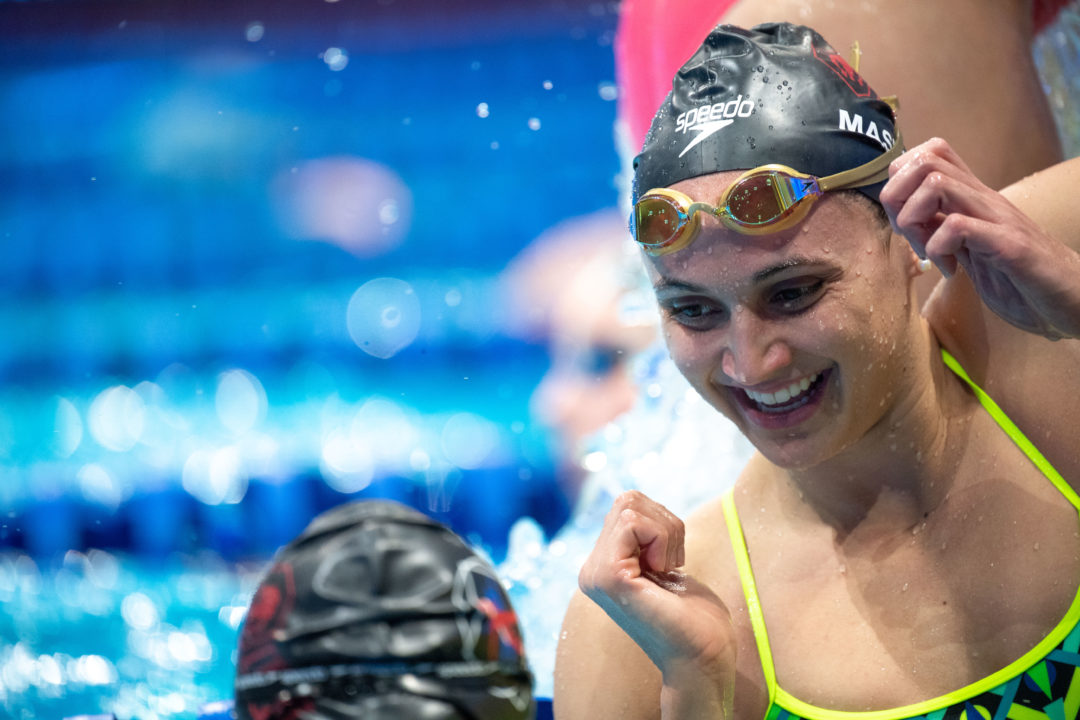 Fresh off winning three Olympic medals, Canadian Kylie Masse (pictured) heads up a 36-member roster for the Titans in Season 3 of the ISL. Archive photo via Mike Lewis/Ola Vista Photography

The International Swimming League (ISL)’s Toronto Titans has released its official roster for the upcoming 2021 season, with a 36-swimmer roster slated to compete in Naples, Italy beginning in late August.

The Titans retained 15 swimmers from last season, including Great Britain’s Jay Lelliott via fan vote, and drafted 10 more athletes during in the inaugural ISL Draft, including using their rookie selection on Polish sprinter Kasia Wasick.

Australian breaststroker Chelsea Hodges, who was Toronto’s first non-rookie selection in the draft, will miss the entire regular season for personal reasons, but will stay on the roster regardless. Poland’s Dominika Sztandera, a 2019 European Short Course Championship gold medalist in the women’s 4×50 medley relay, will take her place during the season.

Russian distance freestyler Anna Egorova, who was originally retained by the Titans, reaggravated an injury during the Olympics and will miss the season as well. The team has signed American Kaersten Meitz in her absence.

Some of the more notable newly-acquired swimmers for the club include Wasick, a top sprinter for the New York Breakers who scored 112.5 points last season, and German flyer Marius Kusch, who put up 110 points for the London Roar during Season 2.

Among the names joining the roster via free agency, Anika Apostalon, Candice Hall and Sergey Fesikov return from last season, while Larissa Oliveira joins the club from the Aqua Centurions.

Toronto was one of two expansion clubs in Season 2 of the ISL, along with the Tokyo Frog Kings, and reached the league semi-finals, finishing seventh overall.

37-year-old Brent Hayden, who came out of a seven-year retirement in 2019 to gear up for the Tokyo Olympics, remains on the roster, indicating he’ll be back competing.

The Titans’ top scorer in 2020 that will not be back with the club next season is Rebecca Smith, who will be swimming at the University of Calgary beginning in September.

Someone who will be able to step in and fill that void will be Kayla Sanchez, a longtime training partner of Smith at the High Performance Centre – Ontario, who missed last season due to injury.

Sanchez and Smith teamed up to win silver in the women’s 400 freestyle relay for Canada at the Tokyo Olympic Games, while Sanchez was also a prelim contributor on the Canadian women’s 400 medley relay team that won bronze. Masse was also a member of that squad.

Another interesting addition for the Titans in Season 3 will be Summer McIntosh, who made her Olympic debut in July at the age of 14 for Canada.

McIntosh finished fourth in the women’s 400 freestyle, was a semi-finalist in the 200 free, and led off Canada’s fourth-place-finishing 800 free relay. Set to turn 15 before the season begins, McIntosh could be a sneaky-good pick for Toronto if she ends up competing.

Wasick decided not to be retained by NYB, so she was already available during the rookie round, which was before fan vote and the open draft round. Apparently ISL’s definition of availability to be selected during rookie round is true rookie or a vet who doesn’t want to be retained by their previous team (no idea why either, but that’s what their rule states)

Oh… Because it was her decision not to be retained rather than the teams. Still weird but at least there is some distinction from the other rounds. Thanks!

Losing Hodges is a big L

Was hoping for more local talent or at least Canadian talent.