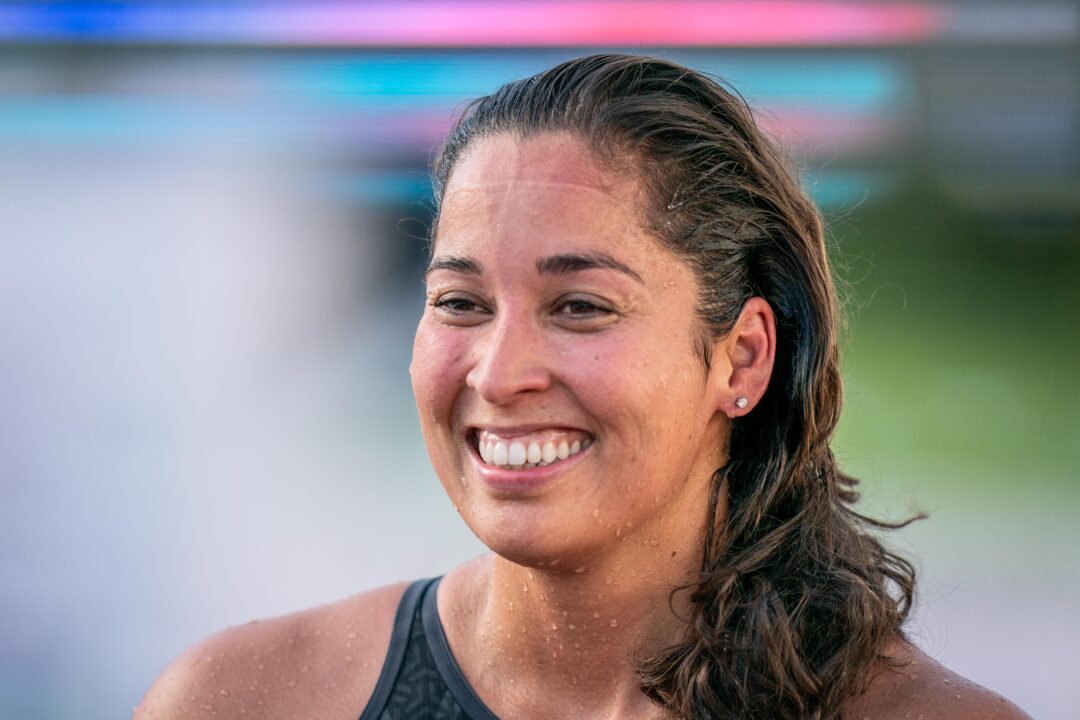 Ranomi Kromowidjojo, who has four Olympic medals and 45 World Championship medals, is retiring from competitive swimming at age 31. Archive photo via Mine Kasapoglu

The Euro Junior team is headlined by Daria Golovati, the only member who is also competing at the World Championships two weeks earlier in Budapest.

Dutch swimmer Ranomi Kromowidjojo has announced her retirement from competitive swimming at 31 years old. This ends a 16-year professional career that included appearances at the 2008, 2012, 2016, and 2020 Olympic Games.

At her final Olympics in Tokyo, Kromowidjojo finished 4th in the 50 free, missing the podium by .09 seconds.

Her 28 all-time short course medals is more than any female swimmer has earned in the history of the event.

Kromowidjojo retires as the World Record holder individually in the 50 free in short course meters, thanks to a 22.93 from the 2017 World Cup.

Even late in her career, Kromowidjojo emerged as one of the stars of the upstart International Swimming League, racing for Team Iron in the league’s first three seasons. After three wins in the high-value ‘skins’ events in 2019, she became a swimmer that other teams sought to avoid when choosing the stroke for that event in seasons 2 and 3.

She was the highest-scoring swimmer in the 2021 season whose team did not advance to the final, accumulating 285 MVP points for 12th place overall.

Her team never advanced to the ISL Final in three seasons, with the same teams having competed in that event in every year of its existence.

In a February 2021 interview with SwimSwam, Kromowidjojo said what she wanted to do after retirement.

According to the Dutch champion, she believes that swimmers need to find more balance during their careers, and she wants to help other athletes to find interests and a life outside of the pool. She hopes this will help athletes with a transition to retirement after their racing careers are over.

Kromowidjojo is due to be wed to fellow Dutch Olympic gold medalist Ferry Weertman. Weertman announced his retirement in December.

The retirement, along with that of Femke Heemskerk at the end of the 2021 ISL season, ends a golden era of Dutch sprinting. The two were the last remaining legs of the country’s Olympic relay medal success from 2008 and 2012.

After 16 years of elite sport, my professional swimming career is complete. As a baby of 3 months old, my grandma already began taking me to the pool, and at 4 years old I had my swimming diplomas 🤩

Swimming will always be my passion, but not on a professional level anymore. I have always known that there is more than elite sport, and that it is part of a larger whole.

I have achieved so much more than I could have ever dreamed! Thanks to all those years of top sport, I know that you are capable of much more than you think, among other things by having the right thoughts. And I am also convinced that these experiences will now also help me with my next challenge to inspire others

I don’t know exactly what that will look like yet. But one thing I do know, this is not the end 😊 I can write books full of lessons, beautiful memories, valuable friendships, and everything I experienced as a “pro” (something I didn’t want at all as a 12-year-old because “then you have to train so hard and stop having fun” 🤣). I can also write a book to thank all the people who are (or have been) important to me. But I think that I will instead take time in the coming period -finally- to toast, toast or spontaneously go for coffee ☺️ And enjoy it in a different way.

It was a real pleasure not to do all the great races and moments just for myself. But also to take you on the journey and again, this is not the end 😉 “just” of my professional swimming career. 🥂💋

I will miss her. And the world of swimming will miss her.
A beautiful woman and a sprint Queen.
Congrats Ranomi on your great career.

The dolphin kick from her start was the fastest in female swimming history.

Unexpected but understandable. Will be missed.

Truly one of the sprinting greats. Happy retirement, enjoy it!

I’m hoping the Dutch relays can still be strong without her and Femke.