The Youngest 100 Free Finalist at the FINA World Championships is an American, But… 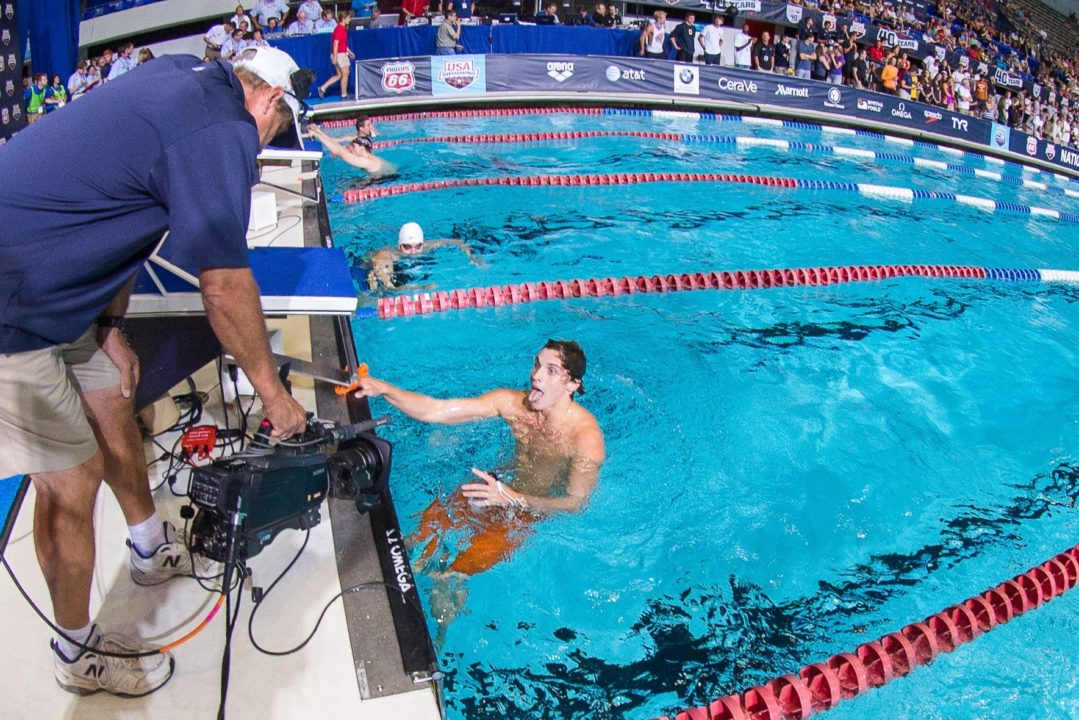 He’s swimming with a maple leaf on his cap. Santo Condorelli, the 20-year-old swimmer based out of California, is that...

He’s swimming with a maple leaf on his cap.

Santo Condorelli, the 20-year-old swimmer based out of California, is that American. After a shocking DQ from Russia’s Vlad Morozov, he was bumped up to 8th place, making him the youngest swimmer to compete in the final tomorrow night.

The catch? Condorelli doesn’t compete for the United States. Although he was raised in the USA, Condorelli has Canadian heritage through his mother’s side of the family and has always had Canadian citizenship. Earlier this year, the former US Junior National Teamer declared Candian sporting citizenship before the 2015 Canadian World Championship Trials.

On Wednesday night at the FINA World Championships, Nathan Adrian was the lone swimmer for the United States in the men’s 100 free semifinals. Adrian posted a 48.36 to earn 5th, giving team USA representation in the finals of an event they’ve struggled with for a while.

The second U.S. entry, Jimmy Feigen, was out of the race after swimming a 49.12 in prelims. Feigen, the defending World Championships silver medalist, finished his first and only individual swim of the meet in a tie for 20th place.

Condorelli came into this meet tied for 1st in the world with Morozov after posting a 47.98 at the Pan American Games. We’re about to see the final of this event at the World Championships, and there’s still only one swimmer that’s been able to beat that time.

Australia’s Cameron McEvoy just snuck under 48 with a 47.94 in the semis. Condorelli has already been faster at this meet than his semifinals time. He led off the Canadian 4×100 free relay in 48.25. He has a legitimate shot at a podium finish, and will challenge McEvoy for the win if he can dip under 48 again. He’ll have to fend off Adrian, the reigning Olympic gold medalist, as well.

The U.S. men have struggled in Kazan, as we see a change of the guard between the veterans and rising stars. Due to the current selection procedures, Condorelli wouldn’t have been able to qualify this year to swim for the United States. He would have had to qualify at 2014 Summer Nationals or Pan Pacific Championships.

He’s made some big improvements since those meets, and would have been a valuable asset to team USA. He’s been good in events that the Americans have been lacking in at this meet.

While we see young talent like Caeleb Dressel, Maxime Rooney, and Michael Andrew making their way through the ranks, the top American sprinters that we currently have are in some trouble. Behind Adrian, only one American has flat started a sub-49 this year. That was Michael Chadwick, who swam a 48.87 at Athens Summer Sectionals.

Of the men on the World Championship team, no one behind Adrian has been better than Feigen this year, the closest being Conor Dwyer, who now also trains at USC, at 49.40. Ryan Lochte looks to be in good form, but Lochte passed on swimming this event individually.

Michael Chadwick is the real deal! Look for him to have a breakout meet at US Nationals this week!

Let this be a lesson learned see for USA swimming. One year selection procedure was a mistake.