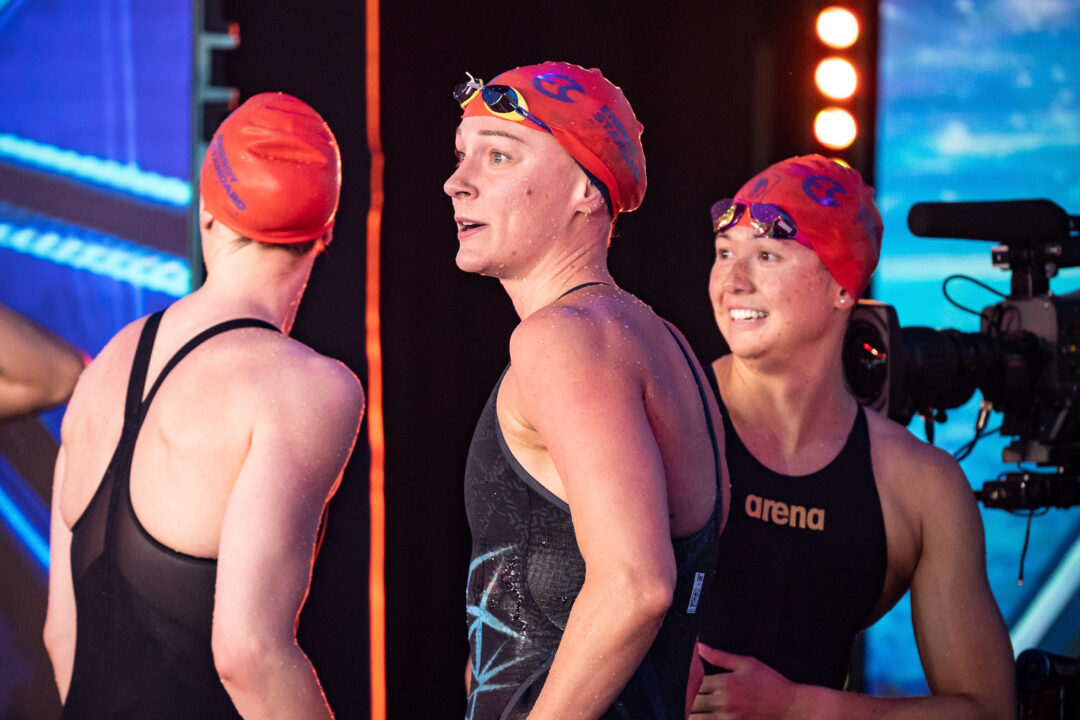 Energy Standard teammates Sarah Sjostrom and Siobhan Haughey own two of the top three performances from the ISL playoffs on the women's side. Archive photo via Giorgio Scala / Deepbluemedia / Insidefoto

Swimming Stats’ Instagram page has published the list of the women’s and men’s top 10 playoffs performances. But, interestingly, those lists are not based on the traditional FINA points.

The Swimming Stats power ranking is based on an index developed using a statistical methodology called Extreme Value Theory, and allows comparisons of results across events.

It is based on the whole distribution of swim times, rather than FINA’s approach based solely on the world record. Basically, the times of the fastest performers of all time in each event are considered, and the data are modelled in order to determine the probability of a specific time be exceeded.

Since the extreme performances of athletes are modelled, a branch of statistics called Extreme Value Theory (EVT) is used. With EVT, it is possible to determine the theoretic probability distribution of such data.

Roughly speaking, from this point of view, a swim’s ranking among the fastest performers of all time is more important for EVT than its relative difference to the world record.

Among men, the top performer is Ilya Shymanovich. He broke (twice) the world record in the 100 breaststroke, a feat no other swimmer achieved during the playoffs.

Although Nicholas Santos did not record a personal best during the playoffs, he won the 50 butterfly in 21.98 during Match 4. He is the world record holder in the event with a 21.75, and his 21.98 would rank him in sixth in the all-time performers list. That is why he appears in fourth in the Swimming Stats top 10 playoffs performances list.

On the women’s side, Siobhan Haughey did not break the 200 freestyle world record. But she did break (twice) the Asian and the ISL record during the playoffs. Her 1:50.65 is the second-fastest performance ever, only 0.22 off of Sarah Sjostrom‘s world record. This is the top women’s playoffs performance.

Kelsi Dahlia broke the ISL record in the 100 butterfly during Match 4 in 54.89, which makes her #2 in the Swimming Stats ranking. This performance would place her third in the all time performers ranking, only behind world record holder Sarah Sjostrom and Dahlia herself.

Sarah Sjostrom also broke the ISL record in the 50 freestyle in 23.08, a time that also would place her third in the all time performers ranking. The difference is that Dahlia’s time in the 100 fly is the third-fastest performance ever, and Sjostrom’s 50 free is the fourth-fastest performance of all time. This is the main reason why Dahlia is slight ahead Sjostrom in the Swimming Stats ranking.

But, so far, the most outstanding performance of the 2021 ISL is the world record set by Coleman Stewart in the men’s 100 backstroke, 48.33 – which was not recorded in the playoffs, but during the regular season. Will we see more impressive performances in the final match?

There’s an article at Swimming World about Peaty not having beeen paid in full for last season yet but says he doesn’t support a boycott so I guess we can assume that his absence this year didn’t have to do with pay.

I didn’t realise Atkinson had the fastest 50 breast in the playoffs! Could be an important race if she can upset King

I’m really impressed with how Kelsi Dahlia has bounced back after Trials. Good for her!

Extra confirmation: Peaty on the way to Dubai for holiday

Rob Woodhouse already confirmed over 24 hours ago that he wasn’t participating. Literally the one time Peaty has mentioned ISL this whole year is to say he’s not participating, well after it had already been announced. And he just posted three photos of himself in the post and none of the team lol.