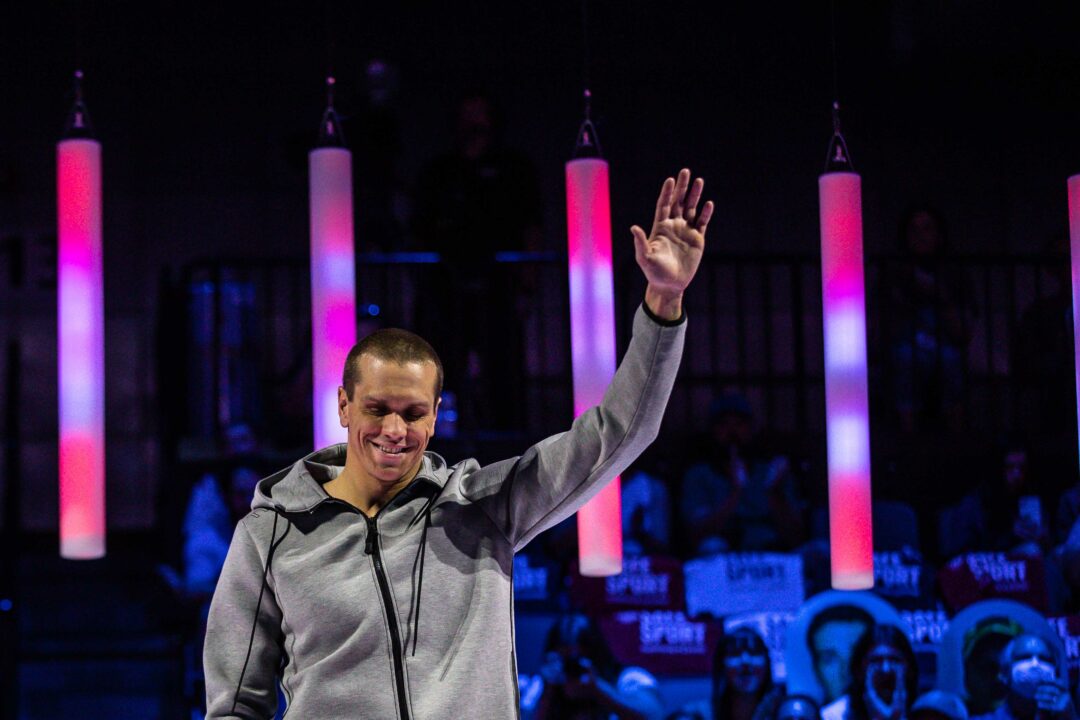 Tom Shields asked an interesting question: how many swimmers raced at all four Olympic Trials meets that were hosted in Omaha? Archive photo via Jack Spitser/Spitser Photography

The 2024 US Olympic Trials will be held at Lucas Oil Stadium, primarily a football stadium, which means that the four-quad run in Omaha is over.

Double Olympic gold medalist Tom Shields mused on Twitter that he was there for the entirety of the “Omaha era” of the U.S. Olympic Trials, meaning that he competed in all four meets held at the Qwest Center/CenturyLink Center/CHI Health Center.

Crazy to think that I attended—as an athlete—the entire “Omaha era” of trials.. wonder how many did

Luckily, we have swimming’s greatest statistician, Barry Revzin, to answer just these kinds of questions.

According to Barry’s research, there were 17 swimmers who competed at all four Omaha meets. Most of the names are recognizable. Of the 17, 12 swimmers are Olympians.

The less recognizable names include Brandon Fischer, who has become a fixture on the US National Team in his 30s while splitting training with his work at the Lawrence Livermore National Laboratory in California; and Austin Surhoff, is a three-time NCAA Champion who semi-finaled at the 2008 Trials and is currently training while coaching at Johns Hopkins.

This was surprisingly-long initially: to swim at all four meets, athletes of the right age would have had to have been good enough at a young age to qualify, and then 13 years later still good enough to stretch their careers into their late 20s or early 30s and still be competing. Upon further consideration, though, it became maybe less surprising: swimmers who are good enough in their late 20s to still be competing were often already very good in their teens.

Josh prenot not getting marked tough

Are you guys sure about kendyl Stewart? I don’t see her anywhere on the results for 2021.

She’s listed in the XML results, but looks like she didn’t actually swim. Good catch.

And then there were 17

I don’t know what I ever did to Braden Keith to deserve the “least-known” moniker, but I guess any publicity is good publicity…

Can’t tell if this is tongue-in-cheek or not.

Bruh, I read this article and I’ve still never heard of you…

Bahaha very much tongue-in-cheek! No doubt I’m an afterthought on this list!

Dude, it was surprisingly cool to see your name on the list haha. Cheers dude!

Of course no one is actually swimming’s greatest statistician. It is like saying “she is the worlds greatest doctor.” There are too many specialties to really make that claim. Some people are great at efficiently compiling data and coming up with a list. Some people can tell you the splits of the 2004 4 x 200 relay off the top of their head. And some people can tell you Spitz first WR (400 free), where Durden swam summer league (Jersey Village) or why Carly Piper swam finals in the 4 x 200 over Komisarz even though Komirsarz had the faster prelims split (coaches used raw time meaning they subtracted out reaction time).

I bet you would even have a problem with my “Worlds Greatest Dad” mug.

Why the heck would anyone down vote this AThomas note?

Low key my favorite part of this is that a 2000 Olympic gold medalist makes the second list but not the first.

You are missing another big one (olympian)- Micah Sumrall (Lawrence)- All 4 Trials for her as well.