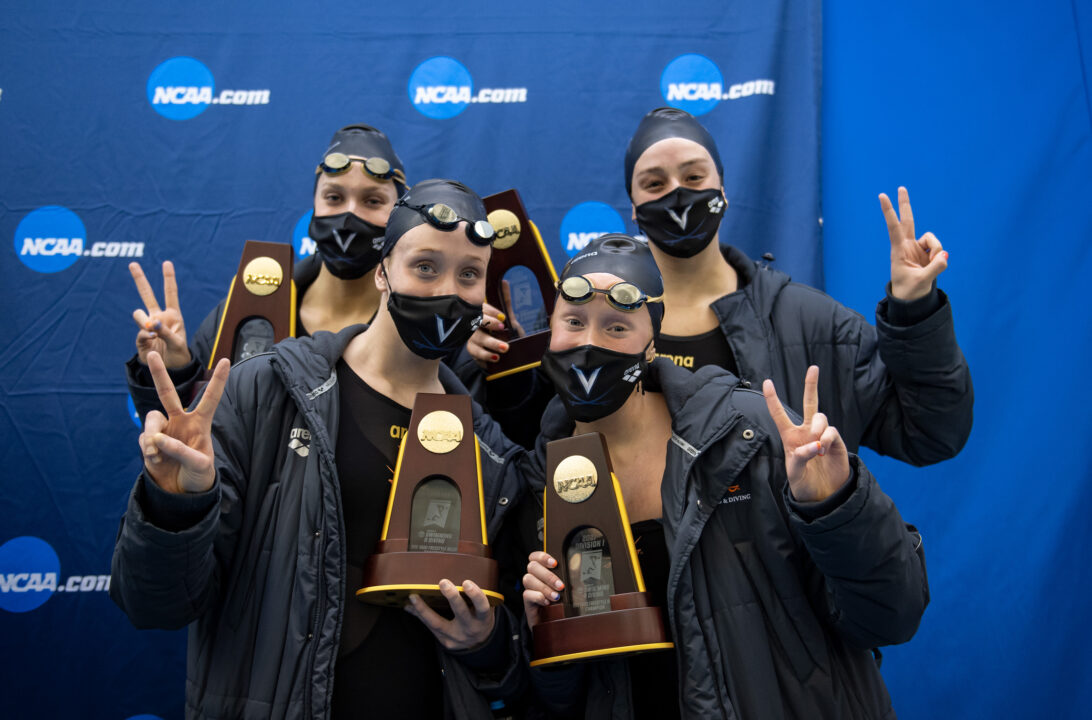 It's a clash of NCAA champions, as the Virginia Cavaliers defend their home pool against the visiting Texas Longhorns in a two-day dual meet. Archive photo via Photo courtesy of the NCAA

No, we don’t normally live recap dual meets. But….

…so things just kind of lined up.

The Texas Longhorns men won their 15th NCAA title last season, a week after the Longhorn finished 3rd, with one of their best NCAA performances in a while. UVA hosts coming off a banner season themselves, literally. The Cavalier women won their first-ever NCAA title, and in fact, are raising the championship banner in the AFC pool today shortly before the swimming portion gets underway. The UVA men finished 9th last season, tying the best finish in program history.

It’s hard to know exactly what to expect as far as times go today. The UVA women tend to swim pretty fast in-season. The Texas men historically have been slow in the fall, but that seemed to change in the last season or two. Swimmers on both teams haven’t necessarily been swimming their strongest events in dual meets so far this season, and if that changes, the electric atmosphere that comes with these two high-energy teams could produce some swift times, even in practice suits. Or…it may not, and this live recap could end up pretty dull. We’ll find out soon enough.

This is the first time these two schools have squared off in a dual meet since the fall of 2013, when Texas, Penn State, and West Virginia all came to Charlottesville for a two day quad-dual meet. UVA lost to Texas on both sides that year, with the Longhorn women winning 196-157, and the Texas men winning 225-128, in a meet that was interrupted by a fire alarm that Friday night.

To answer everyone’s first question..it doesn’t look like anyone is wearing a tech suit.

Freshman Anthony Grimm got the Longhorns rolling with a 21.99 backstroke, and while we don’t see splits for Caspar Corbeau and Alvin Jiang, Daniel Krueger appears to have anchored in 19.06. Matt Brownstead went 22.09 leading off for the Cavaliers, Noah Nichols split a strong 23.93 breaststroke leg, then Max Edwards (21.05) and Matt King (19.25) closed it out.

No surprise here, as Olympic medalist Emma Weyant led from start to finish. Her time of 4:05.68 set a new pool record, breaking the mark of 4:11.20 that Claire Crippen set back in 2009.  Teammate Ella Nelson took 2nd in 4:08.10, also under the old pool record, and Weyant and Nelson now rank 1st and 4th in the nation this season.

Again, no surprise in the winner, this time Texas’ Carson Foster. What is a bit surprising? Swimming a 3:40.48 400 IM in a brief. In November. That shatters the pool record of 3:45.99, set by UVA’s Ted Schubert in 2020. There’s no official record of this sort of thing, but that has to be one of the fastest times ever — probably the fastest time ever — done without a tech suit, and/or during a dual meet. That’s also the fastest time the country this season by over four seconds.

The Texas women finally got into the win column courtesy of a 1:45.88 by Kelly Pash. That moves her to #4 in the nation so far this season.

The Texas men remain undefeated, as sprint star Daniel Krueger takes this one in 19.69. UVA’s Matt Brownstead was just behind Krueger at 19.77

TV intermission: the broadcasters have been interviewing the coaches during the break. Eddie Reese mentioned how much he respects Todd and said that he expects that the UVA women’ championship banner will be the first of many.

UVA dive coach Drew Livingston and Texas dive coach Matt Scoggin are getting interviewed together, and are effusive in praise for each other. Livingston dove for Scoggin as a member of the Longhorns, and Scoggin actually officiated the Livingstons’ wedding recently.

Those are now the three fastest times in the country this season. All three of those women had previously been in the top four in the nation, with Walsh previously having the top time at 1:55.07. Sticklen just missed Jennifer Markkand’s 2018 pool record of 1:54.43.

Carson Foster picked up his second win of the day, this time coming in an event he doesn’t race quite as often. Still, he won by nearly two seconds with a 1:44.29; that appears to be the 3rd-fastest time of his career. It’s worth noting that the UVA men have yet to win a race at this point in the meet.

The Texas men keep rolling in another close race. Alvin Jiang got his hand on the wall first with a 47.93, followed closely by teammate Anthony Grimm (48.13) and UVA’s Sean Conway (48.23).

Alexis Wenger took down her own pool record, popping a 58.88 that improves on the previous mark of 59.58. Texas’ Anna Elendt kept it fairly close, touching 2nd at 59.33. Wenger remains at #2 this season, while Elendt moves to #6.

Another close race, but the Longhorns’ remain unbeaten. Caspar Corbeau held off Noah Nichols to win 52.82 to 53.13. That pair finished well ahead of the rest of the field, with the Longhorns’ Charlie Scheinfeld taking 3rd in 55.42. Corbeau and Nichols rank #4 and #9 in the nation this season.

Score update: assuming Meet Mobile is correct, it’s a tight race on the women’ side, where Texas leads 90-79. Meanwhile, the Longhorn men are running away with this meet, leading 127 to 42 with the 1000 and and the 400 medley relay to go.

Fans were treated to a dual between freshmen Olympic medalists, but today, the one who won an IM medal finished ahead of the one who won a distance free medal. UVA’s Emma Weyant beat Texas’ Erica Sullivan, 9:42.71 to 9:47.39. That appears to be the 2nd-fastest time of Weyant’s career, and she’s now the fastest swimmer in the nation so far this season.

David Johnston won the final individual event of the afternoon with a time of 9:01.85. That’s just a few seconds slower than his time of 8:57.37 against Texas A&M a few weeks ago. The Longhorns swept the top three spots, with Luke Hobson (9:08.62) and Alex Zettle (9:11.01) touching after Johnston.

Once again, the UVA men kept it close for most of the race, but the Longhorns wrapped up the afternoon by staying undefeated. Each team led off with an impact transfer – Cameron Auchinachie for Texas and Matt King for Virginia, and the two had nearly identical times, 43.94 and 43.99 respectively.  Drew Kibler and Carson Foster each split exactly 43.44 the Longhorns, while August Lamb (43.64) and Justin Grender (43.36) followed for the Cavaliers. Texas had a mere 0.17s second lead as the anchor legs — Daniel Krueger for Texas and Matt Brownstead for Virginia – dove into the pool. Krueger looked like he had some pop in his stroke and opened up a lead fairly quickly. Brownstead battled hard, but Krueger scorched 42.34 anchor to Brownstead’s 42.69 to preserve the win, and the win streak. The Longhorns’ time of 2:53.16 puts them at #2 this season, behind NC State’s 2:52.79, while UVA’s 2:53.68 moves them to #4.

We’re assuming that the scores will continue tallying tomorrow. Texas racked up a lot of points early on with diving dominance, but with diving now complete, the UVA women should take the lead tomorrow. The UVA men haven’t managed to win a race yet, but they’ve come close, and it wouldn’t be too much of a surprise if they could pick off Texas in at least one event, possibly a relay, tomorrow.

Action resumes at 10am eastern time.

if you live in europe you can watch on espnplayer.com, of course monthly payment required

UVA got naked lapped by texas!

Where is the diving commentary?

The article mentions the Texas women finishing a program high 3rd at NCAAs last year. I am pretty sure Texas women have won 7 NCAA titles, mostly in the ‘80s and early ‘90’s, as well as 1 or 2 AIAW titles previous to women’s swimming being contested in NCAA.

You’re absolutely correct. I knew there was something I meant to go back and fix, and that was it. Thanks!

Swimswam of course glosses over the Texas women, especially that 200 fly every chance they get. There is no denying big things are happening for the Texas women!! Swimswam stop sucking up to UVA

Do you want them to write a separate article because a Texas swimmer went 1:54 in the 2 fly?

EMMA STICKENS 200 FLY???? I’m sorry but that is ridiculous. Talk about Texas have a amazing fly program. No one can ever try to deny that