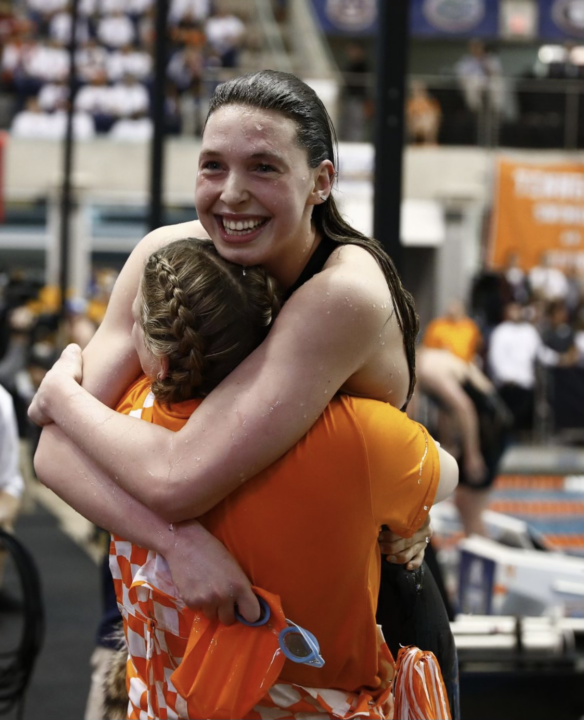 University of Tennessee senior Kristen Stege clocked an NCAA-leading time of 15:57.01 in the 1650-yard freestyle during Thursday’s dual meet against Carson-Newman University.

The 21-year-old hadn’t contested the mile since NCAAs, opting instead to enter the 200 and 500 free at four prior dual meets this season. She missed Tennessee’s midseason invite in November.

Stege’s 15:57.01 is the fastest time in the NCAA this season, just ahead of Georgia’s Abby McCull0h (15:57.08). Notably, four high schoolers (Katie Grimes, Bella Sims, Claire Weinstein, and Cavan Gormsen) have been faster than the quickest collegiate swimmers this season.

Stege was recruited to East Carolina University as a sprinter before breaking the American Athletic Conference (AAC) record in the 1650 free in her first-ever attempt at the event in February of 2020. After East Carolina decided to cut its swim and dive programs (the women’s team has since been reinstated), she transferred to Tennessee.

At the 2021 SEC Championships, Stege shattered her previous best by 20 seconds, posting a 15:47.72 to capture the conference crown while also setting a new school record along the way. She defended her SEC title last year with another new school record and lifetime best of 15:42.37.

Thursday’s 1650 free was only the eighth official 1650 free swim of her life, according to Swimcloud.

Stege also won the 500 free on Thursday in 4:45.66, seven seconds off her personal best from the 2021 SEC Championships.

The Volunteers cruised to a team victory on the women’s side, 206 to 55, over Carson-Newman, a Division II program. The Tennessee men triumphed by a score of 216.5 to 45.5.

Sprint star Jordan Crooks didn’t swim his signature events, but he still made his presence felt with a 100 back victory in 46.25. Crooks also notched a personal-best 50 back time with a 21.17 opening split on the victorious 200 medley relay team. He picked up another relay win in the 200 free relay with a 18.49 swinging split.

Tennessee junior Olivia Harper earned a big victory in the 100 fly, lowering her lifetime best to 54.63. Her previous best stood at 54.99 from February of 2020. Harper also reached the wall first in the 100 back, clocking a 53.07 to win by more than three seconds.

Wow—shocked at how fast Tennessee was today!

Crazy to think that Grimes, Sims, and Weinstein have all been over 15 seconds faster than the NCAA leading time in the 1650.