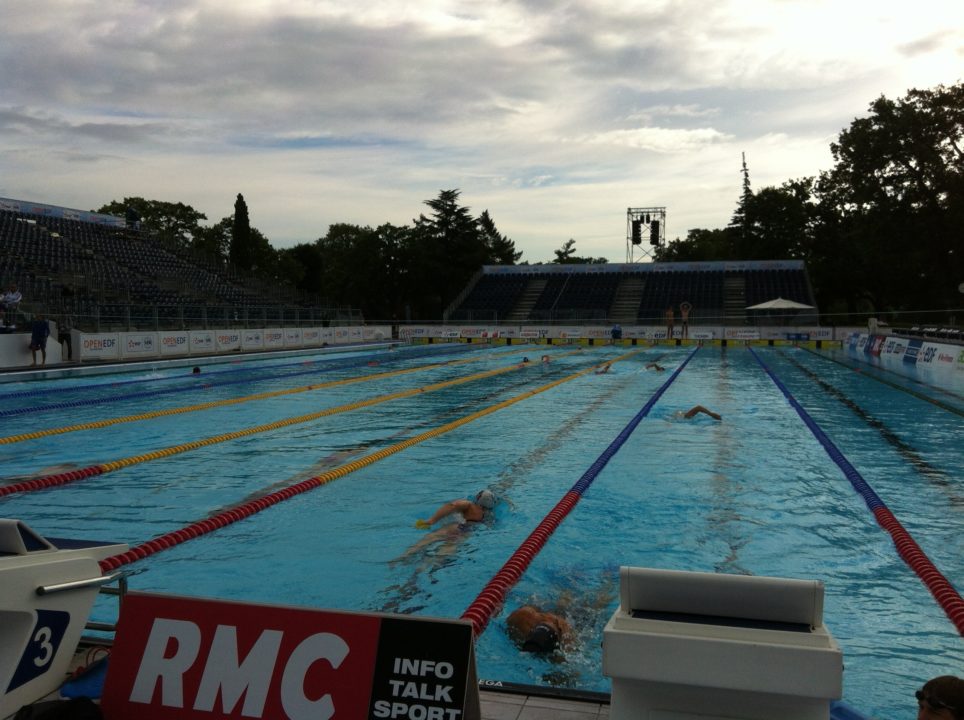 A chilly day in the pool still left some good times, but many athletes seem to be saving their speed for a little bit warmer weather in the afternoon. (Photo Courtesy: Nico Messer)

Nico Messer was born and raised in Switzerland, and is currently the head coach for Vevey Natation. He has spent time working as an assistant with the famed Race Club program in the Florida Keys, and is a former elite-level swimmer himself. He is on deck this week at the Paris Open giving us first-hand accounts and feel from what he sees with his own eyes. His website can be found here. You can also follow him on Twitter @aquadonis.

On the morning of the second day in Paris the athletes and coaches saw a big drop…in temperature! We had some rain yesterday but it was probably close to 10 degrees celsius colder this morning than it was in the evening during the final session yesterday. Did this influence the results this morning? One would think so! Many athletes decided to skip warm-up pool and ended up standing out in the cold for a minute or two before their prelim swims.

The Aussies must have been happy as the word is they travelled more or less three straight days to escape the winter back home and race in Paris just to find the same cold weather. Maybe that’s part of why they looked best prepared for the prelim session this morning. The French also look prepared and leave a strong impression in those challenging conditions. Maybe it’s the “home pool” advantage or simply the desire to please the many fans showing up regardless of the weather. However you want to put it – James Gibson, former 100 breast World Champion and now assistant coach in Marseille, said it best: “Those who want to swim fast are doing it, everyone else is not”.

The French showed their strength in the 200 free this morning. Not quite as impressive as the 100 free yesterday but still 4 out of 8 will be representing France in the final later today. And from what I read in the comments on yesterday’s report from Paris, the 4 French men in the 200 free final seem to make the French the 800 FR favorites for London for the SwimSwam readers.
In the men’s 100 breast, Giedrius Titenis from Lithuania looked really strong this morning taking first seed for the final in 1:01.56 followed by Frenchman Giacomo Perez Dortona. The other two from yesterday’s 50 breast podium, Fabio Scozzoli and Cameron van der Burgh, didn’t or couldn’t push their prelim swim sitting in 4th and 6th place.
The men’s 100 fly results from this morning look to provide an exciting final with the top 5 already under 54″. Polish fly ace Pawel Korzeniowski finished 6th with a 54.00 not looking as convincing as he has in other meets this year. Laszlo Cseh cruised to a convincing 200 IM prelim win in 1:59.17 over 4 seconds ahead of 2nd place Russian Dimitri Zhilin. Cseh looks strong as always but will most likely end up having Michael Phelps and Ryan Lochte steal the stage light come London as it was the case in the past 2 Olympics.
Matt Targett took the top seed for the men’s dash in 22.38 ahead of Fred Busquet and Florent Manaudou. All 8 swimmers in the final went under 23 seconds and most of them should be able to improve on their prelim time as the sky starts to clear up again.
Benjamin Stasiulis looked great in the 200 backstroke. Total control and perfect technique. He’s 7 seconds ahead of the rest in 2:02.12, and unless he false starts or gets disqualified he’ll have the clock as his only competitor in the final this evening.
In the women’s 100 back we have the same situation as we had after the heats of the 200 yesterday. Russian Anastasia Zueva taking the top seed in 1:00.86 ahead of Kirsty Coventry from Zimbawbe (1:01.17) and French Olympian Laure Manadou in 1:01.48 (who by the way seems to have improved her under waters a lot from what I seem to remember).
The 200 fly as many other races on the women’s side didn’t have a lot of participants and will only feature an A-Final this afternoon (no B-Finals are run for an event with fewer than 24 entries). Spaniard Judit Ignacio qualified in 2:11.86 ahead of Swiss Martina van Berkel.
Camille Muffat only qualified 3rd in the 400 free this morning behing French teammates Coralie Balmy and Australian Katie Goldman. Camille went out in a 1:59 at the 200, 6 seconds faster than anyone else before she started her “swim down” on the back half. Looking at how she swam this morning, I wouldn’t be surprised if she’ll try to go sub 4 minutes in the final. She still didn’t push the first 200 but swam more actively…the way many athletes do in the beginning of their warm down…keeping the heart rate up enough to flush the system without hurting your body.
I didn’t speak of Sarah Poewe yesterday but with taking the 200 breast and qualifying 2nd in the 50 breast this morning, she at least deserves a honorable mention. She’ll be going to her 4th Olympics (her 3rd under the German flag) and looks as strong as always. She’s been one of the top breaststrokers for a long time but I can’t see her do anything out of the ordinary in London.
The last race of the morning session, the women’s 100 free saw an easy looking Femke Heemskerk take the top spot in 54.97 ahead of Russian Veronika Popova and Australian Yolane Kukla.
Most 50’s on the men’s and women’s side didn’t provide great pleasure this morning. The athletes probably got washed out by the rain and I am willing to give them a chance to make up for it in the finals, so I’ll have some exciting things to tell for my last report from Paris.
Full Meet Results available here.

It was an ironic comment after her crazy splits in the 800 free. But you know perhaps it’s a new tactic to swim. Very slow and then very fast.