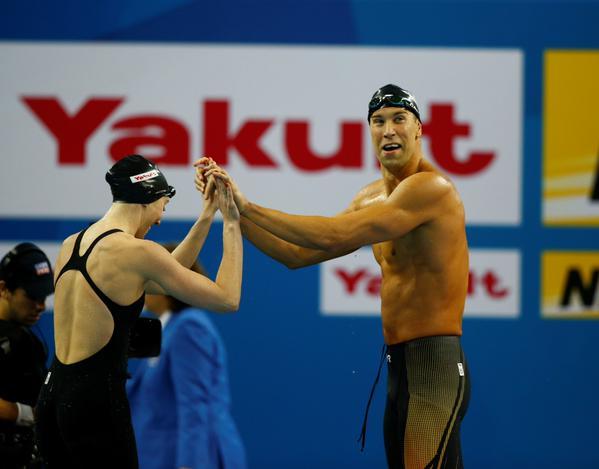 Josh Schneider, Matt Grevers, Madison Kennedy and Abbey Weitzeil went 1:28.57, with the 17-year-old Weitzeil bringing the team back from 3rd place to win gold and break the world record. Current photo via FINA

In a meet featuring 16 world records through four days, the American contingent has finally gotten on the board, taking down a world record in the 4×50 mixed free relay in the final event Saturday night.

The team was made up of Josh Schneider, Matt Grevers, Madison Kennedy and Abbey Weitzeil, and went 1:28.57. The previous record was set by Russia last winter at 1:29.53.

The U.S. team actually had to come from behind to beat Russia for the gold in Doha. After three legs, the U.S. was running third, with Russia leading and Brazil in second place. But the team’s youngest swimmer, 17-year-old Weitzeil, came up with a huge split, going 23.25 (tied for the best split of any female in the field) to run down both Russian and Brazil for the win.

The U.S., Russia, Brazil and Italy all got under the old record.

Here’s a look at the American relay’s splits compared to the 2013 record-setting iteration of the Russian team:

It’s a unique group for the Americans, with top male sprinter Nathan Adrian and rising top female sprinter Simone Manuel not in Doha. Schneider came up big with that 20.94 leadoff split. That’s a couple hundredths faster than he went in the individual 50, and as we saw in the men’s 4×50 free relay, getting a 20-second leadoff man is difficult to do.

Grevers, the Olympic champion backstroker, kept the team in the hunt for the two female swimmers, a unique pairing. Kennedy is a veteran, a few weeks away from her 27th birthday. Weitzeil is a 17-year-old high school senior making her first World Championships appearance. One bond they do have in common: both are California Golden Bears, as Kennedy graduated in 2010 and Weitzeil just recently signed her National Letter of Intent to compete there next season.

I believe it’s the mixed free relay, not the medley.

I don’t care at all about mixed relays but I want to pay tribute to Abbey Weitzeil’s performances in relays overall.
She proved since last summer she was an amazing team player.
And this week her best performances didn’t come in individual but from the relays.
50 free. 24.23
Mixed 4X50 free relay split. 23.25
100 free. 53.08
4X100 free relay split. 51.57
even if you add around 0.5s or 0.6s, you see she was much faster in the relays.
It looks like she transcends herself in a team and it’s a great news for the US sprint relays in the future.

For me, Sedov 20.59 opening was the Top Revelation Performance of th Worlds.
Many people dont understand, but a 18years-old doing a time like that is totally supernatural.It s mind blowing fast.Some people are very talented and are early bloomers, but there is no way he is not going to improve a lot in the next 3-4 years, when he is in top muscle form.

For some dont get it:We are talking of a potential 19 and 20 seconds swimmer in SCM and LCM.

He is clearly with Orsi the most impressive sprinter i have seen in these championships . Mnaudou is also impressive , that’s clear . But those 2 have made very solid statements for next year .