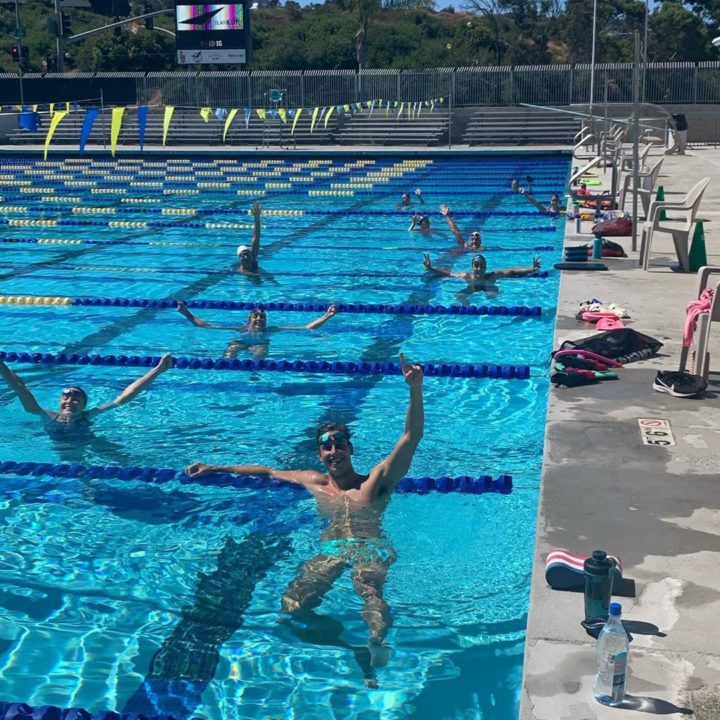 A group of Team Elite swimmers were able to return to training in a 50 meter pool in San Diego on Wednesday as the area moves into Phase 3 of reopening. Archive photo via Team Elite/Instagram

The team is using the Coggan Family Aquatic Complex, which officially reopened to reservations on Wednesday. The pool is located in the San Diego suburb of La Jolla.

While the team had been training in small groups in a small 22-yard backyard pool, as of Wednesday they have returned to full group training in a local outdoor 50 meter high school pool. Swimmers are being group 2-per-lane, and safety precautions like face masks, cleaning of surfaces before and after sessions, and closing locker rooms are in place.

Next week, the team’s home pool at a local Jewish Community Center is expected to re-open, allowing 1 swimmer per lane.

San Diego County is expected to move into Phase 3 of California’s reopening plan this week, with pools technically scheduled to reopen on Friday, June 12, per San Diego County guidelines.

While many of the group’s international swimmers, including a group of Israelis have returned to their home countries to train, at least 11 swimmers were back in the water on Wednesday.

Group in the water Wednesday:

Marsh was the head coach of the U.S. women’s Olympic Team in swimming at the 2016 Games in Rio de Janeiro.

What a diverse group…….

It’s these kind of ice cold takes that will derail the BLM movement. This is not a productive comment, it’s just an attack.

unbelievable. Feels like eternity since the last day of JCC in March