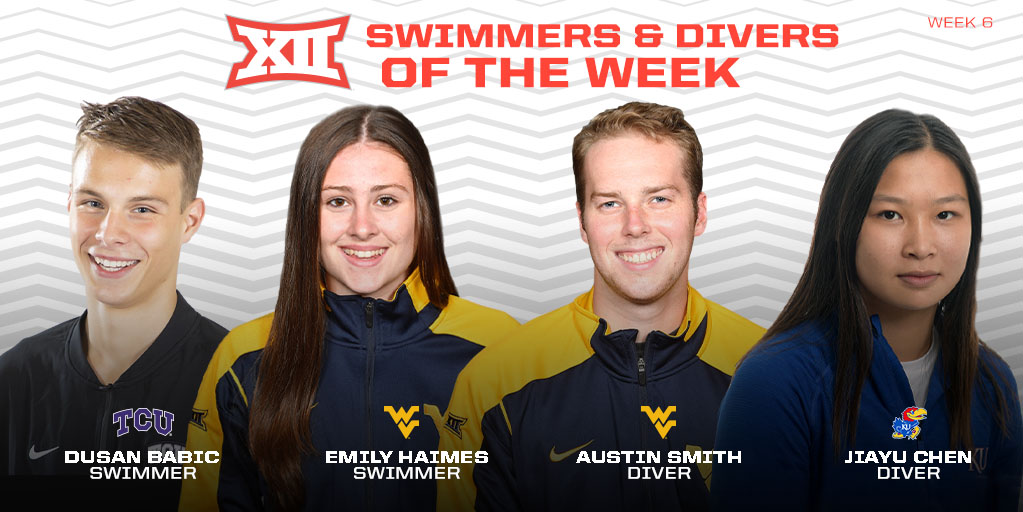 Babic was named Men’s Swimmer of the Week after picking up his first dual meet double win of the season. The freshman collected a victory in the 1,000 freestyle in his first career start in the event. He followed that performance with another win in the 100 freestyle.

After pacing the Mountaineers in a dual meet at TCU, Haimes collected Women’s Swimmer of the Week honors. The freshman earned three total victories, including an individual victory in the 100-yard freestyle with a 52.02 time. She swam the leadoff position in two of Mountaineers’ relays, helping the teams finish first in both. Haimes performance helped West Virginia to its first Conference win of the year.

Smith helped the Mountaineers to a pair of wins over SMU and TCU en route to earning Men’s Diving honors. The senior collected the first win of his collegiate career on the 1-meter springboard at TCU, earning a 296.77 total. He also finished third on the 3-meter at TCU, completing the 1-2-3 Mountaineer finish on the event.

Chen was named the Women’s Diver of the Week after continuing her strong freshman campaign in Lawrence. She took home a quartet of wins with a pair of victories coming in the 1-meter and the 3-meter dives. Chen is in the midst of a 12-straight event winning streak.