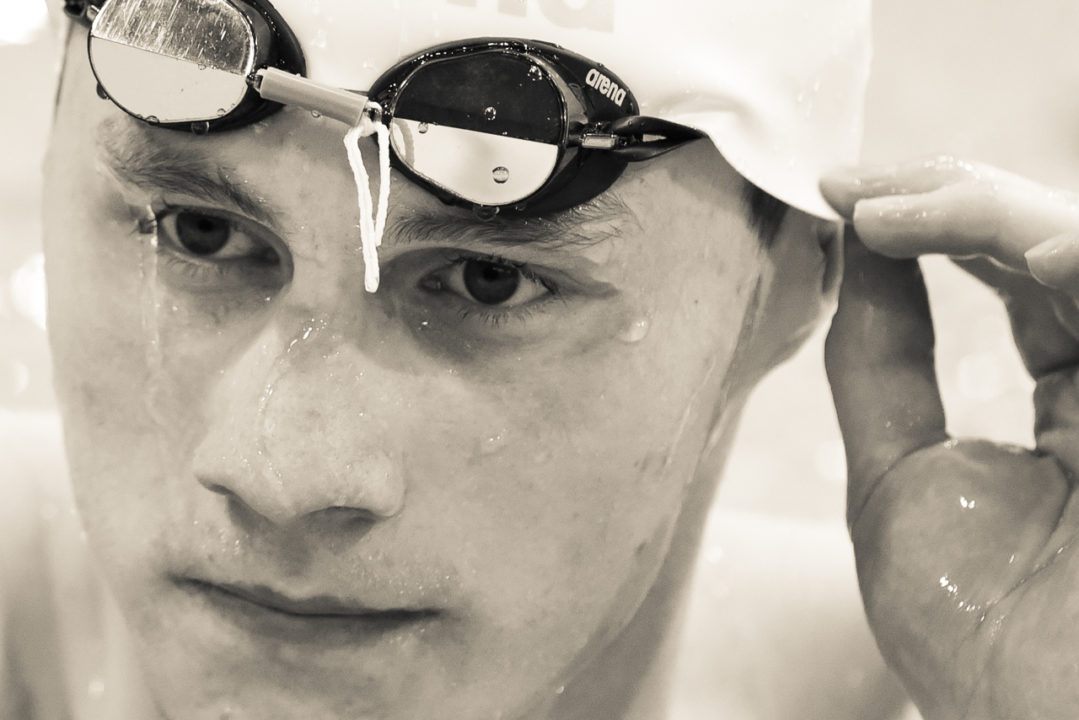 Tarasevich won the 100 back by over 4 seconds, surging to a 45.82 ahead of teammate Aaron Greene, who finished 2nd in 50.21. Current photo via Peter Sukenik/www.petersukenik.com

Day 2 of the UNC-Louisville dual meet saw the Cardinals seal their victories over the Tarheels on both the men’s and women’s sides. The Louisville men swept the events on day 2 to leave the final score at 241-114, while the Cardinal women got the job done with 209 points to UNC’s 144.

Louisville’s Grigory Tarasevich was arguably the top performer on the men’s side today after breaking the pool record for a victory in the men’s 100 back. Tarasevich won the race by over 4 seconds, surging to a 45.82 ahead of teammate Aaron Greene, who finished 2nd in 50.21. Tarasevich now owns the top times in the country in both backstrokes, as he also set a pool record in the 200 back yesterday with a nation-leading 1:40.32.

ACC medalist Trevor Carroll tore through the water to pick up a Cardinal victory in the 200 free. Carroll went up against UNC standout Jordan Merrilees, winning the race with a quick 1:37.54. Merrilees finished about a half second back in 1:38.02 to put up one of the strongest day 2 performances for the Tarheel men.

On the women’s side, Louisville All-American Mallory Comerford won her 2nd individual race of the weekend to follow up on her win in the 100 free yesterday. Comerford completed her sweep of the sprint freestyles, racing to a 22.94 victory in the 50 free.

Also sweeping her specialty events was Louisville’s Andee Cottrell, an All-American breaststroker. Cottrell swept the breaststroke races at this meet with her victory in today’s 200 breast, where she touched in 2:12.85 to finish nearly 4 seconds ahead of the rest of the field.

Olympic Trials finalist Hellen Moffit pulled off a successful double to bring home 2 wins for the Tarheels. The UNC senior captain went head-to-head with Louisville backstroker Alina Kendzior in the 100 back, winning the race in 53.82 to Kendzior’s 54.39. Moffitt returned to the pool for the 100 fly, where she led a 1-2 punch with her 53.36 ahead of teammate Sarah Koucheki‘s 54.28.

LOUISVILLE, Ky. –Finishing the day with five NCAA ‘B’ cuts, the University of Louisville Cardinals swimming and diving team defeated the Tar Heels, with the No. 11-ranked Cardinal men winning 241-112 and the No. 3-ranked women winning 209-144 Saturday morning at the Ralph Wright Natatorium.

“I’m pleased with the way we performed today.” said head coach Arthur Albiero. “That was a big challenge to come back from a little bit of a later night last night and then to come back this morning and bring really good energy. I’m please with the way the group performed from beginning to the end, even when the meet was decided. At the end of the day, we are preparing for championship season coming up. The challenge is to continue to progress and I think we saw a lot of those areas and a few more that we need to continue to work on. We always talk about continuing to take steps in the right direction. This is the first time ever we beat the UNC women. It’s a step in the right direction and we have great respect for them.  For our men, this is a good group of guys we’ve got going right now. It’s very senior heavy, so we enjoy it and learn from these guys and they did a great job leading the team, men and women, and that’s what a good team has to have – great leadership. We’re definitely getting that right now.”

In the 100-fly, Abigail Houck finished third for the women with a time of 54.80. The men completed another sweep of the top-3 spots led by Josh Quallen (48.91), who just edged David Boland (48.95) after dueling the entire race, with Zach Harting tying for third place with a time of 49.82.

The Louisville Cardinals return to action in two weeks when they host the Louisville Invitational at Ralph Wright Natatorium.

LOUISVILLE, KY. –  The University of North Carolina women’s swimming and diving teams wrapped up a two-day ACC dual meet at the Ralph Wright Natatorium against the nationally-ranked Louisville Cardinals Saturday afternoon.  The third-ranked Louisville women prevailed by a score of 209-144 over the #20 UNC women while the #11 UofL men downed the #20 Carolina men’s team 241-114.

Carolina fell to 0-3 in dual meet competition so far this season having competed against one of the best schedules in the nation.  The UNC men have already competed against #7 Georgia, #11 Louisville and #13 Tennessee.  The Tar Heel women have gone up against #3 Louisville, #8 Georgia and #11 Tennessee.

“I felt we were better today on the second day of the meet than we were two weeks at Tennessee.  Today we had over 30 season best performances and that was one of the goals for the weekend.  Certainly everyone in the country is working hard now and I am certain Louisville is as well.  They were deep and little too much for us this weekend but I do feel good about the work we are doing and the improvements we are making.  I am looking forward to competing again in two weeks,” said UNC head coach Rich DeSelm.

On the second day of competition, UNC senior Hellen Moffitt led the way for the Tar Heels as she picked up a pair of first-place finishes.  She took home top honors in the 100-yard backstroke in 53.82 and just two events later she claimed the 100-yard butterfly with a time of 53.32.  On Saturday, Carolina earned second place in both relay events and also merited second-place finishes in five individual events from four different swimmers – Caroline Baldwin, Natalie Ward, Caty Hulsey and Macey Arnold – as well as junior diver Elissa Dawson.

The second day on the men’s side was highlighted by the work of senior diver Jack Nyquist who dominated on the three-meter board with a score of 387.30.  UNC’s Sean Burston and Andrew Owsiany finished second and third, respectively, with scores of 361.13 and 330.60.  Carolina had runnerup finishes in both of Saturday’s relays and the Tar Heels got a second-place finish from senior Jorden Merrilees in the 200-yard freestyle.

On the opening day of competition on Friday, Carolina swimmers and divers turned in some outstanding efforts.  Both Tar Heels’ women’s relay teams had solid showings on the opening day. Caroline Baldwin, Katie Munch, Hellen Moffitt and Sarah Hitchens combined to win the 400-yard freestyle relay in 3:41.91. Tar Heel senior women’s captain Hellen Moffitt also had strong swims in a pair of individual events.  She won the 200-yard backstroke in 1:57.60, finishing ahead UofL’s Alina Kendzior by 1.57 seconds. Her fellow senior teammate, Sarah Koucheki won the 200-yard butterfly in 1:58.53.

UNC divers, led by coach Abel Sanchez, were quite productive on the first day. Elissa Dawson and Maria Lohman went 1-2 in three-meter diving with Dawson far ahead of the field in a big way with a score of 374.63.  On the men’s side, Jack Nyquist continued his dominance this season as he scored 377.93 to win one-meter diving by a whopping 34.88-point margin.  Sean Burston was not far behind with a third place finish.

Carolina senior Jorden Merrilees had a tremendous Friday session as the Australian won the 500-yard freestyle in 4:25.26.  The Tar Heel men had respectable finishes in the 200 IM as Eugene Teeand Michael Meyer went 2-4.  The UNC women produced a similar 2-4 finish in the same event with swims from Hellen Moffitt and Sarah Koucheki.

North Carolina will return to the pool on Thursday, November 17 when it competes in the NCSU/GAC Invitational in a three-day event that wraps up on Saturday, November 19.

Murphy will be the first swimmer to go 44 for 100 back in season. Count on it.

I hate that Tarasevich is still eligible to compete but, either way, 45.8 in season is incredible!

How is he still able to compete? He was found doping last year and still is NCAA eligible? Doesn’t make sense to me.

butlikewhy – this has come up in the past (a D2 swimmer a few years back, other athletes in other sports, some divers, etc.), and the take is basically the NCAA isn’t a member of WADA, so they follow their own anti-doping rules and processes, and they don’t seem to want to recognize USADA/WADA tests.

They actually don’t have the same list of banned substances – I’m not positive if the NCAA has outlawed Meldonium or not, but will research it.

He tested positive to Meldonium in march but his levels deemed his ingestion tohave been previous legal time frame ie 2015 . He is Fina & IOC eligible . Meldonium just didn’t end the way WADA had hoped .