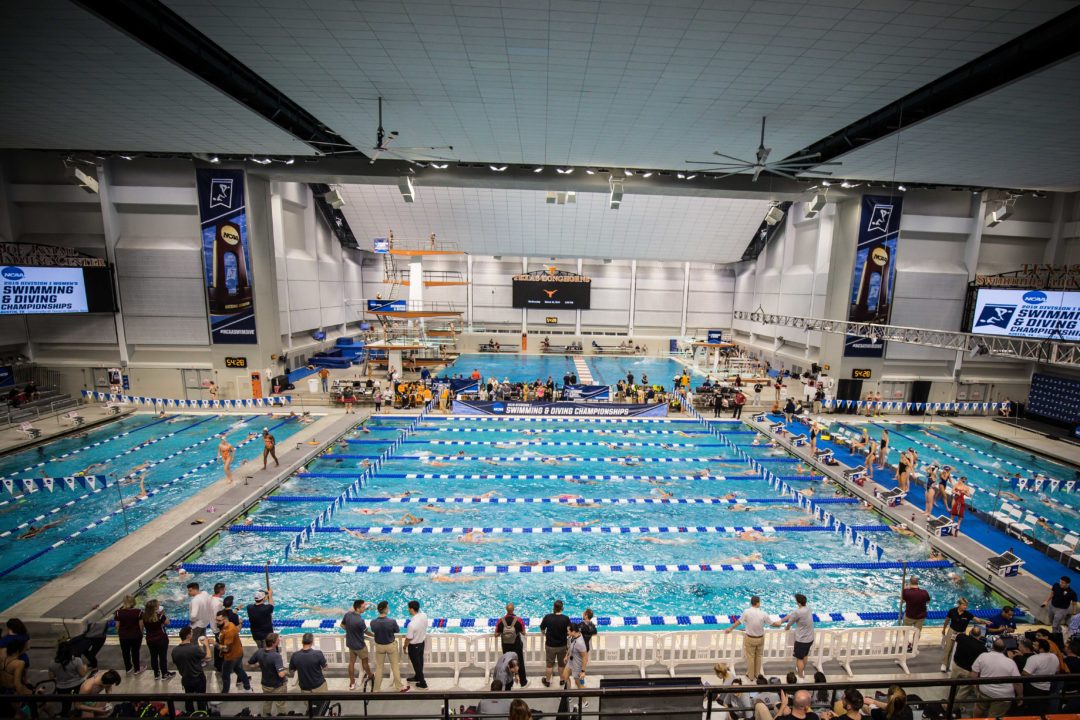 Check out the highlights and race videos from the boys' events at the 2020 Texas High School 6A State Championships in Austin. Archive photo via Jack Spitser/Spitser Photography

The Texas Boys’ 6A State Championships came down to the wire, as Humble Kingwood took the title by just 3.5 points over Conroe The Woodlands. Klein Oak was just 12 points ahead of 2019 champion Southlake Carroll in the battle for 3rd, as their 9-year win streak was snapped. Read on for some highlights from the meet, accompanied by some race videos.

Notably, the Humble Kingwood boys didn’t win any events, but had the depth to beat The Woodlands, who won 4 events. The Woodlands narrowly missed qualifying for the A final in the 400 free relay. Anchor Tyler Hulet appeared to have some trouble with his goggles on the first 50. He took it out in 24.18, and brought it home in 23.94 for a 48.12 split. He led off the relay in 46.05 as they won the B final. That time would’ve placed 5th in the championship heat, which would have given them 10 more points than their B final win and been enough to win the meet.

Fellow A&M commit Vincent Ribeiro of Round Rock broke 1:47 for the first time in the 200 IM, winning in 1:46.86. Ribeiro also placed 2nd in the 100 breast with a 54.67, his lifetime best by a second. Houston Clearlake’s Mitchell Mason, an LSU commit, was within a half second of the State Record in that race as he came from behind to win that race in 54.59.

Spring’s Dalton Lowe, who has committed to Louisville, was also an individual winner. Lowe was tenths away from a lifetime best as he won the race in 47.86.

Boys 100 breaststroke State Champion is Mitchell Mason, not Mason Mitchell. It’s a name you will be hearing A LOT the next few years!

Houston is on top this year! See Ya Southlake!

This was the slowest state meet in years. Embarrassing!

Bold assertion from the 5A side…

Umm, not really though?

Definitely not the slowest, just no real superstars like a Levant on the men’s side without Carozza or Johnston. This year was definitely one of the deepest in recent memory- for example, a 4:23 didn’t even medal in the 500, something almost unheard of previously. Also gotta remember that a good portion of the fastest kids this year also slant more towards the 200s of stroke, distance events, etc. than the pure sprints.

The story of the meet was the Woodlands not A finaling the 400 free relay which cost them the championship unfortunately.

Very true, but Matthew Tannenberger is a special tallent and Eddie Reese is going to have fun making him yet another 200 free NCAA champion from Texas. Equally impressive was backstroker Tyler Hulet. He was the shortest guy in the A final but he swims very tall and easily won with a beautiful backstroke technique.

Are the splits correct for prelims of that relay? Basically, did they only miss the final because Hulet went out in 24 the first 50 for some reason?

Yep. His goggles fell off.

Yeah, if you watch the prelims video, you can see him dive in with about a bodylength lead, almost come to a full stop while he tried to fix his goggles, and pop up at the same time as the team that was previously in second. Also at the 50 wall, he took his last stroke at the flags and was forced to kick into the wall, presumably because he couldn’t see. Really sucks to lose that way.

The Woodlands also DQd one of their relays at regions and didn’t even swim it at state.

In that 200 MR boys, free leg, that is Matthew Tannenberger racing PsychoSon; they dived together, turned together but Matthew T beat him 20.32 to 20:69, for the first place. Unfortunately, our relay DQ-ed. Their 1:31.82 from prelims is a new school record, beating old school record set by Dax and Kerrington Hill team by over 2 seconds.

Thank you. He was sad though his relay got DQ-ed as he talked about winning this State the whole year, especially after he DQ-ed that relay last year at State, after finishing 3rd in prelims. But, life goes on. He did make Winter Juniors cut in 100 breast at this State by winning B final with 56.92. And his 400 Free Relay set new school record in their last swim for the high school, beating another Dax and Kerrington Hill led relay by 0.03.

Girls races? 1:43 from Nordmann is worthy of her own article…especially giving she was less than a second off the national high school record? That’s essentially a 1:33 for guys which would be fairly notable. 22.8 50 fly split by Kit Kat Zenick was ridiculous as well.

Those will be posted momentarily in a separate post

Will there be articles for the 5A meet?

Not only in finals, but in A final too. The team that would’ve gotten 5th ended up on the podium. Crazy